Posted on February 15, 2006 by Sharon Lindbloom

Utah is looking for a new slogan, one officials hope will bring money-spending tourists flocking to the state (see “Looking for a pretty, great tag line”).

“It should describe Utah’s ’emotional core.’ It will emote ‘Utah.’ It should summarize, symbolize and synergize the entire state, highlighting Utah’s attributes to outsiders far and wide.

“Oh, and it should be pithy. Three to five words would be fine, please.

“Just remember that tens of millions of dollars are riding on it.

“That’s the kind of challenge coming up with a new state tourism brand is, and it’s being handled by tourism officials and advertising experts. Soon to be unveiled, the simple phrase will be the linchpin of a subsequent marketing and advertising campaign designed to prompt outsiders to pack up the family and spend some tourist bucks in the Beehive State.”

“will reveal ‘the look of Utah,’ ‘the soul of Utah’ and ‘the sound of Utah,’ all composing the ’emotional core of Utah.'”

To me this seems simple.

The trick is stringing the words together to make them appealing to tourists.

At 62% Mormon, the state has other things to offer; but wouldn’t the “emotional core” reflect the majority? 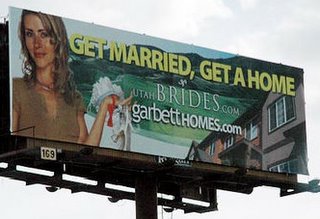 Having said that, Utah is a beautiful state with much to offer tourists. I am awestruck whenever I fly over the Wasatch Mountain Range. Its beauty is staggering; it virtually cries out the glory of God. The last time I visited Salt Lake City, as I looked out the window of the plane, I was reminded of a passage from the Bible:

“For the wrath of God is revealed from heaven against all ungodliness and unrighteousness of men, who suppress the truth in unrighteousness, because what may be known of God is manifest in them, for God has shown it to them. For since the creation of the world His invisible attributes are clearly seen, being understood by the things that are made, even His eternal power and Godhead, so that they are without excuse, because, although they knew God, they did not glorify Him as God, nor were thankful, but became futile in their thoughts, and their foolish hearts were darkened. Professing to be wise, they became fools, and changed the glory of the incorruptible God into an image made like corruptible man” (Romans 1:18-23)

Utah slogans from the past have included: 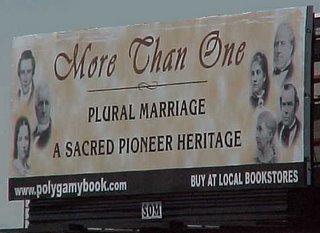 None of these slogans have really accomplished what the state tourism board is hoping for from Utah’s new slogan. An associate professor at BYU suggests looking to slogans of other states for ideas on successful approaches. She mentions “I Love New York” and “Virginia Is For Lovers.”

Maybe they should also look at some of the popular advertising that’s been done in the state (pictured throughout today’s blog). Some of these slogans might work after a little tweaking.

With that in mind, perhaps we can come up with some ideas we can send in to Utah tourism officials. Do you have any suggestions for Utah’s next slogan? Leave ’em here as comments and we’ll see if anything worthy turns up.

*Utah rates very high in use of anti-depressants

One Response to Marketing Utah