Posted on February 23, 2006 by Sharon Lindbloom 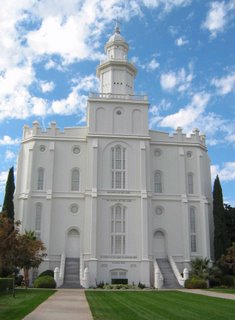 Today’s online Deseret News reports the discovery last week of a “suspicious package” left on the steps of the St. George Temple. The small white box included a message on the outside that said, “Happy Birthday to Jesus, from the Bailey’s.”

Deseret News reports that a bomb squad was called in, along with police, firefighters, and paramedics. Thankfully, upon x-raying the box they found it contained nothing but strips of paper with “little messages” written on them.

It has not been reported why the box was left at the St. George Temple, who the Bailey’s are, or why they would leave Jesus birthday wishes in February. Maybe the box was part of a Bailey’s Family Home Evening activity.

Whatever the background of the package, it’s easy to understand the alarm of St. George authorities. Not only do we live in a world where unmarked boxes could easily be bombs left by terrorists, but the St. George Temple has a history of being a magnet for crazy things.

Just last January 29th the police were forced to use a taser to subdue and arrest a man at the St. George Temple Visitors Center who claimed to be God.

Back in August of 2001 a naked man broke through the locked glass doors of the St. George Temple Visitors Center and bled all over the Christus statue before being taken into custody by police.

In 1996 a man broke in to the St. George Temple by chopping a hole in the temple door.

No wonder the police were concerned about the birthday box for Jesus.

I don’t know why the St. George Temple has more than its share of undesirable incidents, but there is an especially dark spiritual side to that particular temple.

In June of 2004 a friend of mine visited the St. George Temple Visitors Center and learned from a senior missionary that “this temple has probably been visited by the dead more than any other temple.” The missionary proudly showed my friend a photo album which contained a typed list of spirits that had visited the St. George Temple along with newspaper clippings describing some of these appearances.

According to the fourth prophet of the LDS Church, Wilford Woodruff, in August of 1877 the deceased signers of the Declaration of Independence appeared to him demanding to know why temple work had not yet been done for them. President Woodruff promptly went to the baptismal font and was baptized for these men (save 2) and 50 others.

After this experience, President Woodruff said, “The dead will be after you, they will seek after you as they have after us in St. George.” (Journal of Discourses 19:229)