Mormon Prophets Known by Their Fruits

Mormons are always telling me that I should know Joseph Smith was a true prophet because (they quote Matthew 7:20) “by their fruits you shall know them.” Then they point out all the good things the Mormon Church is responsible for like humanitarian aid, boy scout training, good citizens with strong work ethics, etc.

I think Mormons misuse or misunderstand the passage from Matthew. While it is absolutely true that you will know a false prophet by his “fruit,” the fruit is not identified as the kind of good works Mormons bring up. The New Testament describes some of the “fruit” of false prophets as:

Be that as it may, let’s for a moment use the Mormon approach to Matthew 7:20. What “fruit” might we discover from the ministry of Joseph Smith? 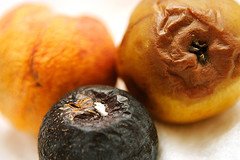 One “fruit” that comes to my mind is that of polygamy. I know–and I’m sure you do, too–that the Mormon Church no longer practices polygamy; there’s been practically nothing else in the entertainment news for weeks. I’m sure we all know the LDS Church excommunicates anyone today who is caught engaging in polygamy. I’m not talking about what Latter-day Saints do these days during their sojourn on earth. I’m talking about the fruitful harvest from the seeds Joseph Smith planted as a prophet.

That Joseph practiced and taught the doctrine of plural wives is beyond dispute. After Joseph died, Brigham Young picked up that ball and ran with it. During the time he was president of the Mormon Church the doctrine was published to the world and practiced openly throughout the Mormon kingdom. Brigham Young’s successor, John Taylor, continued the doctrine of plural marriage as a necessity for those who desired to reach the celestial kingdom in the hereafter. But not only that; in 1886 he strengthened the teaching by receiving a revelation that declared God would never revoke this new and everlasting covenant; it was to stand as God’s law forever. Joseph planted, Brigham watered, John fertilized the crop.

Two years later John Taylor died and along came Wilford Woodruff as the 4th prophet and president of the Mormon Church. In 1888 he echoed John Taylor’s revelation when he said, “The doctrine of plural marriage has come to stay for all time.” However, great pressure was brought to bear upon the LDS Church due to polygamy so in 1890 Wilford Woodruff revealed he “had sought the will of the Lord, and the Holy Spirit had revealed that it was necessary for the church to relinquish the practice of that principle for which the brethren had been willing to lay down their lives.” The “Manifesto” was given to the Church ordering them to stop “contracting any marriage forbidden by the laws of the land.”

However, some did not recognize this directive as being the will of God. Over the next 14 years there were at least 250 church-approved plural marriages performed, demonstrating the need for yet another “Manifesto.” This one was issued in 1904 by 6th Church president Joseph F. Smith, finally ending church-sanctioned plural marriage.

But there were still some that did not believe God had ordained the cessation of the eternal principle of plural marriage. After all, didn’t God affirm, via revelation to His prophets, that The Principle would abide forever? What were these committed Church members to think and how were they to respond? Perhaps they found guidance in the words of the Apostle Paul: “Let God be found true, though every man be found a liar.”

Whatever drove these men to cling to the eternal and essential LDS doctrine of plural marriage, cling they did; and Mormon Fundamentalism was born. Growing directly from the root of the Mormon Church, as planted, watered and harvested by LDS prophets, the practice of religious polygamy flourishes in the United States today with somewhere between 20,000 and 40,000 people living The Principle.

The LDS-generated polygamous lifestyle has always been marked by sin and things about which people ought to be ashamed, but it has deteriorated even more in these latter latter-days. Linked with child rape, child abuse, abandonment, intimidation, spouse abuse, spiritual tyranny and more–all in done in the name of God–this is rotten, despicable fruit.

And now, as if the state of polygamy in the inter-mountain west isn’t bad enough, there’s a new report coming out of a polygamous community in Bountiful, British Columbia, Canada. The people of this community, led by Rulon Jeffs until his death, were members of the now-infamous Fundamentalist Church of Jesus Christ of Latter Day Saints, an offshoot of the LDS Church. When Mr. Jeffs died and his son Warren took over, about 1,000 members split from the FLDS Church in Bountiful to follow new leaders. On April 7th 2006 the Vancouver Sun reported a same-sex marriage between two of the wives of Winston Blackmore, one of the community’s leaders. Mr. Blackmore’s 18th plural wife quietly married his 22nd plural wife in December. Though they have both been “wed” to Mr. Blackmore since they were in their mid-teens and are the mothers of several of his 100+ children, this was the first legal marriage for both women.

Okay, Mormon friends. Let’s talk about Matthew 7:20. Let’s take a look at the “fruit” of Joseph Smith and the other LDS founding prophets. Let’s start with polygamy.

One Response to Mormon Prophets Known by Their Fruits