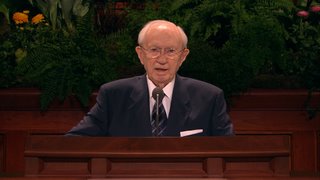 This past weekend marked the 176th General Conference of The Church of Jesus Christ of Later-day Saints. On Saturday evening President Gordon B. Hinckley addressed the priesthood holders of the Church (men and boys 12 years old and up). Mr. Hinckley stated that racism, even among Church members, still “lifts its ugly head.” Deseret Morning News reports Pres. Hinckley calls racism ‘ugly and unacceptable’.

“‘I remind you that no man who makes disparaging remarks concerning those of another race can consider himself a true disciple of Christ,'” said President Hinckley. “‘How can any man holding the Melchizedek Priesthood arrogantly assume that he is eligible for the priesthood whereas another who lives a righteous life but whose skin is of a different color, is ineligible?'”

Of course, understanding that in 1978 the LDS Church removed its ban against people of African descent holding the priesthood, Mr. Hinckley’s audience would have been entirely comfortable giving his remarks a hearty “Amen!” But what about before 1978? Have the qualifications for being “a true disciple of Christ” changed along with the change in the priesthood ban?

I ask because if the qualifications for being a true disciple of Christ have not changed, the Mormon Church has a problem. Let’s review a few representative statements from past prominent LDS Church leaders. Consider…

Alma from the Book of Mormon:

“And the skins of the Lamanites were dark, according to the mark which was set upon their fathers, which was a curse upon them because of their transgression and their rebellion against their brethren…who were just and holy men.” (Alma 3:6)

Or the Book of Mormon Prophet Mormon:

“…for this people shall be scattered, and shall become a dark, a filthy, and a loathsome people, …” (Mormon 5:15)

“The descendents of Ham, besides a black skin which has ever been a curse that has followed an apostate of the holy priesthood, as well as a black heart, have been servants to both Shem and Japheth, and the abolitionists are trying to make void the curse of God…” (Times and Seasons, April 1, 1845, page 857)

“The Lord has not kept [righteous spirits] in store for five or six thousand years past, and kept them waiting for their bodies all this time to send them among the Hottentots, the African negroes, the idolatrous Hindoos, or any other fallen nations that dwell upon the face of this earth. They are not kept in reserve in order to come forth to receive such a degraded parentage upon the earth…” (Journal of Discourses 1:63, 1852)

“Not only was Cain called upon to suffer, but because of his wickedness he became the father of an inferior race…Millions of souls have come into this world cursed with a black skin and have been denied the privilege of Priesthood and the fulness of the blessings of the Gospel. These are the descendants of Cain. Moreover, they have been made to feel their inferiority…” (The Way to Perfection, 1949, page 101)

“We cannot escape the conclusion that because of performance in our pre-existence some of us are born as Chinese, some as Japanese, some as Indians, some as Negroes, some as Americans, some as Latter-day Saints. These are rewards and punishments, fully in harmony with His established policy in dealing with sinners and saints, rewarding all according to their deeds.” (“Race Problems–As They Affect the Church,” 1954, page 4)

“Those who were less valiant in pre-existence and who thereby had certain spiritual restrictions imposed upon them during mortality are known to us as the negroes….The negroes are not equal with other races where the receipt of certain spiritual blessings are concerned, particularly the priesthood and the temple blessings that flow therefrom…” (Mormon Doctrine, 1966, page 527)

What are we to conclude considering last weekend’s teaching from Gordon B. Hinckley? Examining the teachings of these (and other) former LDS authorities, are we to understand Mr. Hinckley means to say these men were not “true disciples of Christ”? Oh-oh.

There is another possible way to understand Mr. Hinckley. To disparage means to “regard or represent as being of little worth.” While the LDS Church has historically taught (as demonstrated above) that non-Caucasian races are inferior, that doesn’t mean the Church believes they are altogether worthless. LDS Apostle John Taylor made this clear:

“Why is it, in fact, that we should have a devil? Why did not the Lord kill him long ago? Because he could not do without him. He needed the devil and a great many of those who do his bidding just to keep men straight, that we may learn to place our dependence upon God, and trust in Him, and to observe his laws and keep his commandments. When he destroyed the inhabitants of the antediluvian world, he suffered a descendant of Cain to come through the flood in order that [the devil] might be properly represented upon the earth.” (Journal of Discourses 23:336, 1882)

I guess either way we try to make sense of Mr. Hinckley’s recent remark it leaves the LDS Church in a pretty poor light. I do agree, though, that racism is ugly and unacceptable. That’s one of many reasons I could never align myself with The Church of Jesus Christ of Latter-day Saints.