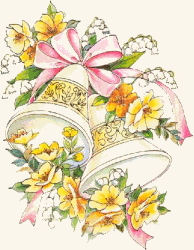 Since we’re on the topic of polygamy, here’s a bit of news that raises a question or two.

In 1945 LDS Apostle Russell M. Nelson married his first wife, Dantzel, “for time and eternity” in the Salt Lake Temple. They made their life together for almost 60 years; Dantzel passed away in February 2005. However, it’s believed by Mormons that she will, by virtue of her temple marriage, reunite with her husband after his death and spend eternity as his wife in the celestial kingdom.

A little over a year after Dantzel’s death Mr. Nelson married again. On April 6th, 2006 Mr. Nelson and BYU professor Wendy L. Watson were wed in the Salt Lake Temple. This is the first marriage for the new Mrs. Nelson, so it’s reasonable to assume her marriage was not just for “time,” but for “eternity” as well. By her temple marriage she has secured the right, if she remains worthy, to also be her husband’s eternal wife in the celestial kingdom.

It’s not allowed within Mormonism for women to be “sealed” (married in the temple for eternity) to more than one man; however, men are allowed to be eternally “sealed” to more than one woman. This is apparently what has taken place in Mr. Nelson’s case.

So the question is, according to LDS beliefs, doesn’t this mean Mr. Nelson will be a polygamist in heaven?

Furthermore, isn’t he a polygamist now though he is currently only living with one of his two wives?

The LDS Church web site defines polygamy as “more correctly polygyny, the marriage of more than one woman to the same man.” The web site also states,

“The Church discontinued polygamy more than a century ago. No members of the Church today can enter into polygamy without being excommunicated.”

I don’t believe Apostle Nelson will be excommunicated for his temple marriage to Wendy Watson. Yet the declaration on the LDS web site, “There is no such thing as a ‘polygamous’ Mormon,” is not entirely accurate. As is so often the case with this religion, there is much more to it than publicly meets the eye.

Sharon surrendered her life to the Lord Jesus Christ in 1979. Deeply passionate about Truth, Sharon loves serving as a full-time volunteer research associate with Mormonism Research Ministry. Sharon and her husband live in Minnesota.
View all posts by Sharon Lindbloom →
This entry was posted in Mormon Leaders and tagged Polygamy, Russell M. Nelson. Bookmark the permalink.

One Response to Wedding Bells for LDS Apostle