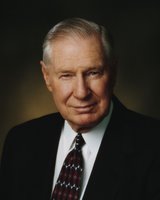 To understand President Faust’s comments, it’s important to first recognize that the LDS view of angels is different from the historic Christian understanding. According to the Bible, angels are created by God as angels–a specific created creature (see Psalm 148). Mormonism, on the other hand, teaches that angels are the spirits of human beings. Generally speaking, according to Mormonism, the angels who interact with people on earth are the spirits of human beings who have died and now reside in the Spirit World (see LDS Bible Dictionary, “Angels”). For example, in Mormonism the angel Michael is Adam, and the angel Gabriel is Noah.

With that background, let’s look at President Faust’s General Conference talk. He spoke about ministering angels (deceased human beings) and how they have appeared in both ancient and modern times to give “instruction, warnings, and directions, which benefited the people they visited.” President Faust continued by quoting sixth Prophet of the LDS Church, Joseph F. Smith:

“In like manner our fathers and mothers, brothers, sisters and friends who have passed away from this earth, having been faithful, and worthy to enjoy these rights and privileges, may have a mission given them to visit their relatives and friends upon the earth again, bringing from the Divine Presence messages of love, of warning, or reproof and instruction, to those whom they had learned to love in the flesh.”

President Faust then commented to his LDS congregation, “Many of us feel that we have had this experience.”

Indeed, there are many stories within Mormon circles that relate appearances of the dead to the LDS living. Many of these experiences take place in Mormon temples; Latter-day Saints consider each one sacred.

Christians have long been concerned over the way Mormons welcome and treasure communication with their deceased friends and loved ones, for God makes it abundantly clear that we are to have absolutely nothing to do with communing with the dead. He calls this behavior–and anyone who practices it–an “abomination” (see Deuteronomy 18:9-14). He says that by engaging in this forbidden pursuit people “prostitute” themselves, become “defiled,” and cause God to set His face against them (see Leviticus 19:26, 31; 20:6).

So the Mormon belief that it is a good thing to communicate with the dead raises red flags for Christians. But wait; there’s more.

As expressed above by President Smith, Mormons are taught that the dead who appear to them are sent by God, to complete a God-given mission; to bring them messages from the Divine Presence, messages of warning and instruction. Jesus’ parable of Lazarus and the Rich Man (Luke 16:19ff) casts doubt on God’s willingness to allow visits between the dead and the living. The parable says, “They have Moses and the prophets; let them hear them.” Nevertheless, Mormon doctrine continues to encourage communication between the living and the dead.

In his conference talk, President Faust went a bit further. He said,

“Many of us feel that we have had this experience [communicating with dead loved ones]. Their ministry has been and is an important part of the gospel.”

For Bible-believing Christians, this raises the question: What “gospel” is this?

How can something so emphatically denounced and forbidden by God in His Word be promoted as “an important part of the gospel”?

A bit further in the sermon quoted by President Faust (but not included in his conference talk), President Smith said,

And when they say to you, “Seek those who are mediums and wizards, who whisper and mutter,” should not a people seek their God? Should they seek the dead on behalf of the living? To the law and to the testimony! If they do not speak according to this word, it is because there is no light in them. (Isaiah 8:19-20)

So is communing with the dead an “important part of the gospel”? Is it a correct principle according to the Scriptures? You be the judge.

Sharon surrendered her life to the Lord Jesus Christ in 1979. Deeply passionate about Truth, Sharon loves serving as a full-time volunteer research associate with Mormonism Research Ministry. Sharon and her husband live in Minnesota.
View all posts by Sharon Lindbloom →
This entry was posted in Bible, Gospel, Mormon Temple. Bookmark the permalink.

2 Responses to Ministering Angels of Mormonism