The Most Criticized Book

Along with about 60 of my senior students from the Bible classes that I teach at a private Christian high school, I recently traveled to three different religious venues for educational visits. We visited a conservative Jewish synagogue, a Hare Krishna temple, and an Islamic mosque, spending two hours at each venue. We had visited the Mormon Battalion Center in Old Town, San Diego several weeks before.

While driving home after the Sunday afternoon mosque visit, I suddenly realized how the groundwork for all four faiths was the same. This commonality goes beyond the fact that all three deny that Jesus was God in the flesh, that they think justification before God requires effort on our part to achieve, or that they teach how a person must belong to their faith in order to get the best God has to offer.

Let me give you some hints by providing you with real quotes of these leaders:

Mormon: “We believe it’s true, but we can’t be sure it’s translated correctly.”Jew: “It can’t be trusted historically. I believe in its spiritual nature, but I’m not foolish enough to believe in stories like the Creation account [the rabbi is an Evolutionist] or Noah.”

Devotee: “Christian leaders took the word reincarnation out of it at the Council of Constantinople in AD 550.”

Muslim: “Its stories about Jesus were written so late that we can’t be sure they are really true. In addition, Paul so tainted it with his personal philosophy.”

Can you guess what the “it” was? Were they talking about the Book of Mormon? The Talmud? The Bhagavad-Gita? The Qur’an? Guess again. In fact, all four spiritual leaders found time in their lectures to criticize the Bible and the lack of reliability they said it had. What is strange is that three of the four men (the Mormon, Jew, and Muslim) made a special point to tell the students how much they like the Bible! 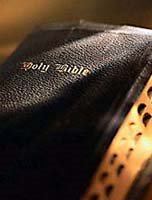 Fortunately, our students have been well grounded on the pertinent issues surrounding the transmission of the biblical text. When I politely corrected the Krishna devotee about his facts and explained how it would have been impossible to have taken reincarnation out of the biblical text in AD 550 since we possess complete copies of the Bible that were copied several hundred centuries earlier, he fumbled around before finally admitting, “Well, I’m no expert on the Bible.”

I felt like saying, “No, sir, you’re not, but maybe you ought to do a little more study before stepping out on a limb and making statements to my students that have no basis in fact.” As for me, I am willing to put the Bible next to any of these religions’ writings, none of which could stand up to the historical/critical tests like the Bible. After all, it is the B-I-B-L-E, and that’s the book for me!

This entry was posted in Bible and tagged Bible. Bookmark the permalink.

21 Responses to The Most Criticized Book