Posted on December 13, 2006 by Sharon Lindbloom 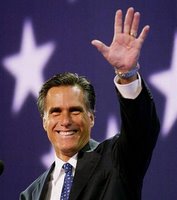 [Mitt] Romney is a Mormon Republican who’d like to be the next president. People are asking the question: Will his religion affect whether or not evangelicals vote for him? That’s a good question. But to many of us evangelical Christians in Utah who witness to Mormons, we think there are more important questions. Will this be an opportunity for the public to learn about what Mormonism really teaches? Will the doctrines of Mormonism be accurately portrayed? Will people understand the differences between Mormonism and Biblical Christianity?This video is more about Mormonism than it is about Mitt Romney.

What follows is 32 minutes of insightful information about the official teachings of the LDS Church. Springboarding from an interview Mitt Romney did on the Charlie Rose show on 5 June 2006, the video discusses six specific issues related to Mormonism.

When Judy Woodruff interviewed Governor Romney for the Charlie Rose show, she remarked,

There are some aspects of Mormonism that many Americans might not understand; the belief that Jesus Christ will appear again in the state of Missouri, or that God has a material body, that He was fathered by another God…

Governor Romney replied that Ms. Woodruff didn’t have those LDS doctrines right, and that the “most unusual” thing about Mormonism is the story of Noah and the Flood. Therefore, “Mitt Romney and Mormonism” takes a look at these questions:

Presented in the form of interview clips, noted Christians involved in ministry to Mormons draw on documented LDS sources to answer these questions clearly and definitively; all according to official LDS teachings.

The section on the most unusual belief in Mormonism is a fast-moving enumeration of unique LDS doctrines including such things as baptism for the dead, the endowment ceremony, the idea of the existence of many worlds governed by various Gods, and the individual doctrines contained within the LDS teaching on Eternal Progression. After watching this, the viewer is inclined to agree with Timothy Oliver who, at the beginning of the segment, said he thinks it is “disingenuous for Mr. Romney to suggest that belief in the Flood is the most unusual thing about Mormonism.”

The next section of the video is titled Ambiguity, Transition, and Diversity in Mormonism. Here is discussed the observation (based on the experience and research of the interviewees) that it is becoming increasingly more difficult to receive straight-forward answers from Mormons about the doctrines Mormonism advocates. Indeed, though there is a big difference between “folk doctrine” and official LDS doctrine, many Mormons seem to be unaware of that fact.

A very interesting interview in this segment is with a returned Mormon missionary who remains active in his faith. Jason Larson states that Mormonism and Christianity are two religions for a good reason: they have “pivotal differences.” Mr. Larson admits that the only real similarities between Mormonism and Christianity are some “common names and terms” used by members of both religions; but, he says, the definitions of these terms “at the core are completely different.”

Finally, the video winds up with a look at the question “Should Christians Vote for a Mormon?” Cogent information and perspectives are set before the audience, which gives viewers some tools and thought-provoking ideas to consider as they evaluate and answer that question for themselves.

“Mitt Romney and Mormonism” is critical of the LDS belief system as it deviates from the Christianity embraced by the producers, but the information it imparts is accurate. It brings significant issues to light and thus is a valuable tool for those seeking answers to the “more important questions” we all should be asking.

One Response to Mitt Romney and Mormonism