The Mormon Church vs. Hollywood 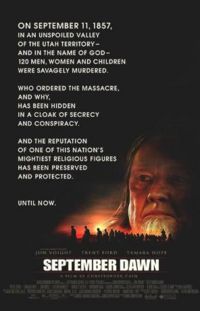 Today the Hollywood movie September Dawn opens in 1000 theaters nationwide. The dramatized portrayal of the Mountain Meadows Massacre–wherein Mormon men massacred 120 emigrants as they peacefully passed through southern Utah in 1857–is unwelcome among Latter-day Saints. The film has been called “controversial” by the news media, but has received stronger condemnation from Latter-day Saints.

“According to Tom Kimball, a sixth-generation Mormon who is book review editor for the Mormon History Assn., the film has been put on a ‘do not watch’ list by LDS Church officials.

“‘This is a bit of salacious trash, designed to sensationalize a terribly tragic event and horrible atrocity as well as to exploit current anti-Mormon and anti-religious sentiment that seems to be sweeping through popular culture,’ said Gene A. Sessions, chairman of the history department at Weber State University in Ogden, Utah.”

As of this writing the LDS Church hasn’t released an official statement about the film, but back in February LDS Church-owned KSL-TV reported,

Nevertheless, September Dawn will likely have its run in American movie theaters. If the film had been made in the 1920s, though, this may not have been the case.

On August 24th 1921 LDS Church President Heber J. Grant wrote a letter to U.S. Senator and fellow Latter-day Saint Reed Smoot. President Grant expressed his deep concern–and that of the LDS First Presidency–over the nationwide distribution and showing of the motion picture “Riders of the Purple Sage,” based on a novel by Zane Grey.

“I am also very glad to note that you have taken up the matter of preventing the motion picture houses from showing Zane Grey’s novel ‘Riders of the Purple Sage.’ Thru the efforts of the Commercial Club here and also others who have endeavored to have this stopped, I am informed that the picture is no longer passing censorship in the State of Michigan. I sincerely hope that it will not be necessary to bring suit in this matter.

“Don’t you think that if it could get to the National Board of Motion Picture Review that litigation is likely to follow if exhibition of this scandalous picture is not prohibited that good results might obtain? It would seem to me that large damages could be collected and I don’t know but that the advertising we would get might be beneficial. Sometimes I think we are too passive and do not defend ourselves as we should against such onslaught.” (Messages of the First Presidency 5:203)

“I have read with very much interest the manner in which you succeeded in having the objectionable picture entitled ‘Riders of the Purple Sage’ by Zane Grey and which was produced by the Fox Film Corporation eliminated from the screen and I assure you that I am very grateful for your efforts in this direction and much gratified at the result.” (Messages of the First Presidency, 14 September 1921, 5:204)

13 Responses to The Mormon Church vs. Hollywood