“The Church is not all butterflies and cupcakes.”

Over this past week the Salt Lake Tribune ran several articles related to the LDS Church, blacks, and the now-defunct priesthood ban. One special report covered the story of Vanna Cox and her sisters. They grew up in the LDS Church very aware of their minority status. The Tribune reports,

“When [Vanna] and her sisters discovered the history of blacks in the LDS Church, they felt pride in black pioneers such as Jane Manning James and Elijah Abel and horror that Green Flake, a slave, was given as tithing to Brigham Young. They didn’t understand the ban on blacks in the priesthood or the racist beliefs of LDS leaders they admired.

“‘We had to learn that the church is not all butterflies and cupcakes,’ she says.”

Coming face to face with lesser-known aspects of Mormon history and doctrine can be a real shock to Latter-day Saints who have lived in a protected LDS bubble all their lives. The Church is definitely not all butterflies and cupcakes; there are skeletons in the closet and sometimes those bones set to rattling.

Beyond the issue of racism in the Church, a short list of additional things Latter-day Saints might find troubling could include:

An ex-LDS friend of mine felt the ground give way as a Mormon when she came across a statement made by Joseph Smith. She read,

“If they want a beardless boy to whip all the world, I will get on the top of the mountain and crow like a rooster. I shall always beat them…. I have more to boast of than ever any man had. I am the only man that has ever been able to keep a whole church together since the days of Adam. A large majority of the whole have stood by me. Neither Paul, John, Peter, nor Jesus ever did it. I boast that no man ever did such a work as I. The followers of Jesus ran away from Him, but the Latter-day Saints never ran away from me yet” (History of the Church 6:408-9). 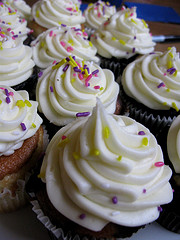 When my friend read that quote she thought enemies of the Church had made it up. “Surely Joseph Smith never said such a thing,” she thought. “A true prophet of God would never say something like that.” When she found Joseph’s bold claim in History of the Church, and found other equally troubling statements he had made, she realized Joseph Smith indeed was not a true prophet of God. She and her family left the Prophet and the church he founded; now they live for Christ.

Friends, the LDS Church is not all butterflies and cupcakes. Be encouraged to take a careful tour of the kitchen before indulging in the proffered sweets.

Sharon surrendered her life to the Lord Jesus Christ in 1979. Deeply passionate about Truth, Sharon loves serving as a full-time volunteer research associate with Mormonism Research Ministry. Sharon and her husband live in Minnesota.
View all posts by Sharon Lindbloom →
This entry was posted in Mormon History, Truth, Honesty, Prayer, and Inquiry and tagged Adam-God, Lorenzo Snow couplet, Virgin birth. Bookmark the permalink.

58 Responses to “The Church is not all butterflies and cupcakes.”