Posted on September 21, 2008 by Aaron Shafovaloff 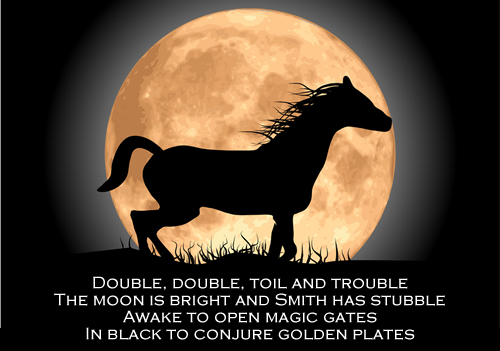 Anyone who regularly interacts with Mormons over Mormon history knows that “most members of [The LDS Church] in the twenty-first century know nothing of Joseph’s magical practices” (>>). I have been studying Mormonism for about ten years, and the depth to which the early Joseph Smith was immersed in a worldview of invoking magic and controlling spirits continues to amaze me. One thing that I recently learned was the significance of the Autumnal equinox to Joseph Smith’s worldview.

Smith’s prayer “to commune with some kind of messenger” on 21 September 1823 occurred once the moon had reached its maximum fullness the previous day and just before the autumnal equinox. The 1665 edition of Scot’s works (upon which the “Jehovah, Jehovah, Jehovah” Smith parchment depended) specified, “And in the composition of any Circle for Magical feats, the fittest time is the brightest Moon-light” (Scot 1665b, 215). An occult book published in New York in 1800 also stated, “Dreams are most to be depended on by men at the full of the moon” (Beverly Gipsy 1800, 19). Because the full moon was the preferred time for treasure digging (Dorson 1946, 174; Granger 1977, 225; R. Walker 1984b, 443), it is probably no coincidence that, according to Martin Harris, Smith acted as treasure-seer earlier that night (J. A. Clark 1842, 225). In fact, his prayer “to commune with some kind of messenger” may have been in response to an unsuccessful group effort earlier that evening to locate a treasure in the hill. That Smith’s experience occurred at the autumnal equinox was also significant. Because the planetary hours of invocation began at sunrise which occurred at different times, Sibly’s Occult Sciences had specified that the equinox was the time when the planetary hours of invocation corresponded most closely with the common hours of the clock (1784, 174; also deVore 1947, 179). In the magic world view, the equinox was a time when the earth could be expected to experience the introduction of “broad cultural movements and religious ideas” (Brau 1980, 194, 107).

In this light, the visit of the angel Moroni took on unusual aspects. The angel had appeared on the night of the Autumnal equinox, between midnight and dawn–hours auspicious for a magical invocation. On the day of the equinox Joseph had subsequently made his four annual visits to the hill. When finally he retrieved the plates, it was the eve of the equinox, in the first hour after midnight. Accounts suggested he had been required to take with him that night a consort (his wife), to ride a black horse, and to dress in black–all lending a further magical tenor to the operation.

As a prelude to Halloween, I suggest that the LDS Church put on a pageant during the Autumnal equinox of the story of Joseph Smith’s angelic visitations and retrieval of the plates. Only, of course, if they are willing to include the magic.

Only those who have read Marquardt’s chapter are allowed to comment on this thread. By joining in the discussion you are promising to have already read it.

64 Responses to Joseph Smith and the Magical Autumnal Equinox