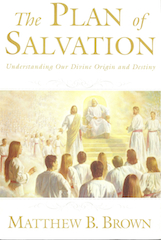 I’ve been reading The Plan of Salvation: Understanding Our Divine Origin and Destiny by Matthew B. Brown (Covenant Communications, 2007). I’m not finished reading it yet, but the opening section, “Where Did I Come From,” favorably impresses me. Identified on the book jacket as a “respected gospel scholar,” Mr. Brown has written ten non-fiction books, and authored numerous articles and lectures for the LDS apologetics organizations FAIR and FARMS (now the Neal A. Maxwell Institute of Religious Scholarship).

The reason Mr. Brown’s The Plan of Salvation impresses me is the book’s straightforward presentation of classic Mormon doctrine. Consider some section headings and quotes included in just the first seven pages of Chapter 1:

[To the question “Is God my Father?”] “President George Q. Cannon answers, ‘Yes. God has revealed it, that we are literally His children, His offspring;…that He begot us;…we are his children descended from Him!'” (p. 7)

“The enormous potential of each of God’s offspring was referred to in an official statement made by the First Presidency of The Church of Jesus Christ of Latter-day Saints. This statement, which was prepared in 1909, reads in part: ‘Man is the child of God, formed in the divine image and endowed with divine attributes, and even as the infant son of an earthly father and mother is capable in due time of becoming a man, so the undeveloped offspring of celestial parentage is capable, by experience through ages and eons, of evolving into a god.'” (p. 8 )

“God [the Father] had a progenitor.” (p. 9; brackets added for clarification)

“Elder Orson Pratt taught this very same doctrine. He said, ‘We were begotten by our Father in Heaven; the person of our Father in Heaven was begotten on a previous heavenly world by His Father; and again, He was begotten by a still more ancient Father; and so on, from generation to generation, from one heavenly world to another still more ancient.'” (p. 9)

“God Has Experienced Mortality. Joseph Smith told the Saints in Nauvoo, Illinois, ‘[I am] going to tell you how God came to be God. We have imagined that God was God from all eternity. These [concepts] are incomprehensible to some but are the first principle[s] of the gospel — to know that we may converse with Him as one man with another and that He was once as one of us and was on a planet as Jesus was in the flesh.'” (p. 10; brackets retained from the original]

“God Has Received Temple Ordinances…Wilford Woodruff informed the Latter-day Saints of his day that God the Father ‘had His endowments long ago; it is thousands and millions of years since He received His blessings.'” (p. 12)

“God the Father has a divine Spouse. Elder Erastus Snow taught that ‘there can be no God except He is composed of the man and woman united, and there is not in all the eternities that exist, nor ever will be, a God in any other way. …There never was a God, and there never will be in all [the] eternities, except they are made of these two component parts; a man and a woman, the male and the female.'” (p. 13; ellipsis and brackets retained from the original)

“God Has Been Resurrected…President Brigham Young alluded to this same precept [that God the Father had laid down His life and took it up again just as Jesus Christ did]: ‘The Father, after He had once been in the flesh, and lived as we live, obtained His exaltation, attained to thrones, gained the ascendancy over principalities and powers, and had the knowledge and power to create — to bring forth and organize the elements upon natural principles. This He did after His ascension, or His glory, or His eternity, and was actually classed with the Gods, with the Beings who create, with those who have kept the celestial law while in the flesh, and again obtained their bodies. Then He was prepared to commence the work of creation, as the scriptures teach.'” (p. 13; brackets added for clarification)

When non-Mormons draw attention to many of these classic LDS doctrines or the quotes Mr. Brown has employed for support, Mormons accuse them of using unofficial sources or pulling the quotes out of context. Therefore, I sincerely thank Mr. Brown for his candor in presenting Mormonism. It’s refreshing to see a “respected gospel scholar” offering the same information that critics of Mormonism have long detailed, albeit for a different purpose.

It would be great if every person thinking about joining the LDS Church could read this book (or at least the first section) before making his or her decision regarding membership — because there’s a lot more to Mormonism than skateboarding and Family Home Evening. Proverbs 20:25 says, “It is a snare for a man to say rashly, ‘It is holy!’ And after the vows to make inquiry.” There is a wealth of wisdom in those words.

Sharon surrendered her life to the Lord Jesus Christ in 1979. Deeply passionate about Truth, Sharon loves serving as a full-time volunteer research associate with Mormonism Research Ministry. Sharon and her husband live in Minnesota.
View all posts by Sharon Lindbloom →
This entry was posted in Authority and Doctrine and tagged Doctrine, Matthew B. Brown, Nature of God. Bookmark the permalink.