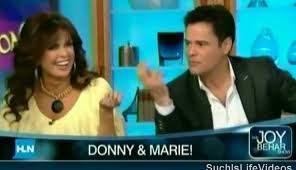 Comedienne Joy Behar recently interviewed Donny & Marie Osmond. They talked very briefly about many subjects, which resulted in virtually nothing being said about anything, with one minor exception. When the questions turned to Mormonism, and specifically to what Ms. Behar referred to as “magic underwear,” Donny and Marie got serious.

Ms. Behar said, “Explain the magic underwear to me, cuz that I don’t know about.” Donny replied, “You know, I’d rather not. I’ll tell you why. Yes we wear…Yes, I am [wearing them]. And I’d rather not get into it because it’s not secret, it’s just so sacred.”

Ms. Behar pushed a bit, noting that non-Mormons generally laugh at the idea of magic underwear. Donny and Marie both said people laugh because they don’t understand, and then Donny tried to help people understand. He said,

“If you could go through the temple, the ceremony there, it goes back to the same ceremony in Solomon’s day, all those sacred temples back then. Not everybody was allowed in there. But the promises we make to, to God, you know, this ‘magical underwear’ or whatever you wanna call it, all it is, is an outward expression of an inward commitment.”

But why underwear, Ms. Behar asked? Why not a shirt, or a ring, or socks? Donny replied,

“You know what’s interesting? Way back in the days…the Jerusalem days, the Old Testament days, they used to wear those things on their foreheads, you know, to remind them, or something on their hand or arm or something like that. It’s the same thing. It’s a reminder of the promises you make to, and those commitments and commandments that you say, ‘God, I promise to keep them.’”

As I understand it, the Jewish tefillin (sometimes called phylacteries), worn by observant Jews since at least the 1st century, are worn as reminders of what God has done (Exodus 13:9) and how God’s people should respond to Him (Deuteronomy 6:5). They are intended to help the wearer keep his mind focused on the things of God during prayer. While Donny Osmond stated that Jewish tefillin and LDS sacred undergarments are “the same thing,” they don’t really have much in common beyond the fact that they are both worn for reasons of religious consequence.

While doing a pretty good job of presenting one aspect of the significance of LDS garments (“The garment provides a constant reminder of the covenants you have made in the temple,” according to LDS Manual True to the Faith), Donny’s comments reflect a trend among Mormons to publically ignore an equally important characteristic of the garments. Indeed, it is this essential quality from which the moniker “magic” emerges.

Within the teachings of Mormonism, the “Garment of the Holy Priesthood” received during an LDS temple ceremony is not merely a reminder, but is also “a shield and a protection” to the faithful wearer (so says the LDS endowment ceremony). While LDS leaders today seem to promote the idea that the “shield and protection” is solely spiritual in nature, this hasn’t always been the case. Early LDS teachings touting the physical protection offered by these garments has given birth in these latter latter-days to Mormon folklore recounting stories of miraculous protection from harm and preservation of life for those wearing the garments.

In his book about the history of Mormon temple worship, David John Buerger wrote,

“Early on, the garments were seen as protecting those who wore them. This idea was underscored by the circumstances surrounding the deaths of Joseph and Hyrum Smith in the jail at Carthage, Illinois. Neither Joseph, Hyrum, nor John Taylor had been wearing his garment. Willard Richards, who had, escaped unscathed in the attack.” (The Mysteries of Godliness, 146)

Buerger cites several early LDS sources that confirmed and propagated the belief that Willard Richards was spared injury or death at Carthage because he was wearing his garments.

The common understanding among Mormons that these garments offer physical protection has created a culture filled with faith-promoting myths. D. Michael Quinn explained,

“In Mormon folklore the temple garment sometimes functions as a classic amulet that has power in itself. ‘A devoted Mormon was in a hotel fire and all the clothing was burned from his body except where his garments were. The only burns he suffered were on his hands and feet, which were not protected by the garments.’…Utah folklorists Austin and Alta Fife recorded more such testimonials: ‘In war, shrapnel and slugs have penetrated the outer clothing but failed to penetrate the garments. When a Saint was caught in a treacherous snowslide all his clothing save the garments was torn to shreds.’ Because of this belief, a local Relief Society president instructed women in her neighborhood ‘that they must never take their garments entirely off. She said when taking a bath to always leave one leg and one arm in the garments.” (Early Mormonism and the Magic World View, 276)

The tale of the hotel fire related by Dr. Quinn sounds rather similar to a personal story told to Mike Wallace by Bill Marriott, CEO of Marriott International. Mr. Marriott claimed that when he was in a serious and fiery boating accident, his pants burned away but he himself was not burned above the knee — his garments protected him from harm.

“Consider the story about the two missionaries in New England who took their clothes to a local laundromat. When they returned to pick up their clothes, so the story goes, they were horrified to find that the proprietor had put their garments on display in his front window with a sign that said, ‘Mormon Monkey Suits.’ Of course, our fearless missionaries confronted the owner, but he refused to return their displayed garments. At that point, the story goes, the missionaries had no choice but to shake the dust from their feet on the front steps and leave. The next morning, the missionaries returned to talk with the owner. When they arrived, they discovered that the laundromat had burned to the ground.” (146)

Do LDS undergarments represent “the same thing” as Jewish tefillin? Is it accurate to say, “All it is, is an outward expression of an inward commitment”? When Donny and Marie (and other Mormons) present Mormon undergarments as mere symbolism they effectively avoid the need to provide what would surely be an uncomfortable explanation of something that is not only “sacred,” but that also works like a charm.

Sharon surrendered her life to the Lord Jesus Christ in 1979. Deeply passionate about Truth, Sharon loves serving as a full-time volunteer research associate with Mormonism Research Ministry. Sharon and her husband live in Minnesota.
View all posts by Sharon Lindbloom →
This entry was posted in Mormon Culture, Mormon Temple and tagged Endowment, Garments, Sacred. Bookmark the permalink.

44 Responses to Sacred Mormon Garments Work Like a Charm