An Interesting Discovery: A Map of the Travels of Moroni

In the ongoing Mormon Apologist Wars on the location of the Book of Mormon lands, one advocate of the LGT (Limited Geography Theory) is Michael Ash. In February of this year, he published an article entitled, “How Moroni and the plates may have made it to Hill Cumorah.” He postulates that Moroni traveled from Mesoamerica to New York, and could have done it in under a year.

In fact, we are told that Moroni, while on his way to drop off the golden plates he lugged all the way to the Hill Cumorah in New York (named he says, after another hill of the same name located somewhere in Central America), Moroni stopped in Arizona, then went on to Salt Lake; afterwards going to Missouri (Independence & Adam-Ondi-Ahman) and then he journeyed to Nauvoo and Pike County in Illinois, and, before getting to New York, stopped in Kirtland Ohio!

Mr. Ash comes by this information from a map allegedly drawn by information that came directly from the Prophet Joseph Smith. Says Ash,

“If the map is genuine and accurately reflects the thinking of early Latter-day Saints and/or Joseph Smith, it supports the theory that Moroni traveled Northward along what became the El Camino, continued traveling north-northwest to Arizona, and then worked his way north through Utah (where we learn that he dedicated the spot for the Manti Temple as well as other temple sites) and eventually found his way to upstate New York.”

Fascinated by the idea of this map, I followed the link Mr. Ash provided in his article to another one, which was an article by H. Donl Peterson, called “Moroni, the Last of the Nephite Prophets,” where he provides a copy of the map. Here is a picture of the map (Figure 2 from Dr. Peterson’s article): 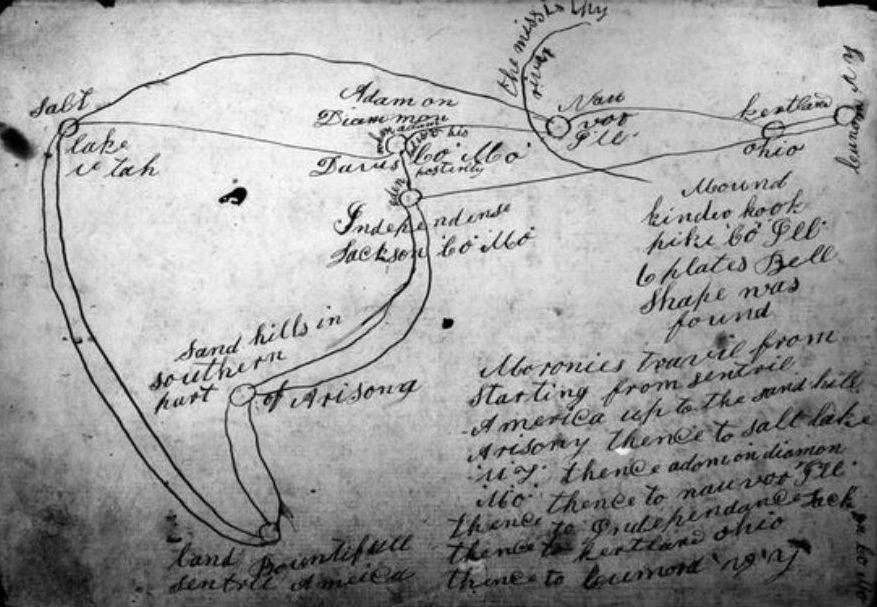 Actually, there are two maps, virtually identical to each other, with only minor differences that Dr. Peterson explains:

“Several years ago, I came across two copies of a map in the Archives Division of the Historical Department of the Church relative to Moroni’s North American journeys… On the back of the map in Figure 1 is written the following:

“’A chart, and description of Moroni’s travels through this country. Got it from Br. Robert Dickson. He got it from Patriarch Wm. McBride at Richfield in the Sevier and also from Andrew M. Hamilton of same place. And they got it from Joseph Smith the Prophet.’”

Dr. Peterson continues with a detailed description of both maps, included here to help readers better understand what the map depicts:

“On the map ‘land Bountifull [sic]’ is listed in ‘Sentral [sic] America.’ The cartographer wrote ‘starting point’ below the reference to Central America. Above the ‘land Bountifull’ is ‘Sand hills in south part of Arizona,’ and above it to the left is ‘Salt Lake.’ To the right is ‘Independens, Jackson Co, Mo.’ and above that is ‘Adam on Diamon, Davis Co, Mo.’ To the right of that is ‘Nauvoo, Hancock C.Ill.’ Below that is ‘Mound Kinderhook, Pick, Co, Ill, 6 Plates Bell shape were found’ (were was was on one copy). Then to the right and above that is ‘Kirtland, Ohio,’ and to the right of that is ‘Commorre [Cumorah], N.Y.’ Below this on the right-hand side of the map is written: ‘Moroni’s Travels starting from Sentral America to the Sand hills Arizona then to Salt Lake U[tah], T[erritory], then to Adam on Diammon Mo, then to Nauvoo, Ill, then to Independence Mo, then to Kirtland Ohio then to Cumoro NY.’

“The second map appears to have been drawn by the same hand and is quite similar to the first, though it twice spells Arizona as Arisony (one ‘y’ has an ‘a’ written over it); ‘eden’ is written near the circle identifying ‘Independense’; ‘where adam blessed his posterity’ is written near the circle identifying ‘Adam on Diammon’; the ‘missisipy river’ is listed near Nauvoo; Kirtland is twice misspelled ‘kertland’; and Cumorah is misspelled ‘Cunora’ and ‘Cumora.’”

Dr. Peterson writes this conclusion about the maps:

“It is interesting to note that the brethren mentioned on these documents were contemporaries of the Prophet Joseph Smith, and they credited him with the notion that the travels of Moroni began in the land Bountiful, which was in Central America, and went through the western New York. Why Moroni took the route he did is still without answers. These men stated that the Prophet Joseph believed Bountiful is in Central America while the Hill Cumorah, the burial place of the plates, is in New York State.”

Peterson references a comment Brigham Young made in 1875 on the day of the dedication of the Manti temple site. Young reportedly said, “Here is the spot where the prophet Moroni stood and dedicated this piece of land for a Temple site, and that is the reason why the location is made here, and we can’t move it from this spot…” Then Peterson states,

“That Moroni dedicated the Manti Temple site is one of the few statements the Brethren have made connecting a Book of Mormon figure with a specific current place and action. This aids us in documenting one of Moroni’s travels and priesthood assignments.”

I find it incredible that these same men, who discount statements by Joseph Fielding Smith, Oliver Cowdery and others, that there was only one Hill Cumorah, and it was in New York, would give credence to a statement by Brigham Young about Moroni going to Utah, and this map purported to have been drawn at the direction of Joseph Smith, while discounting the multitude of statements that locate the Hill Cumorah in New York.

What I found the most interesting about all of this was the side trip that Moroni took to Pike County Illinois. If anyone is familiar with Mormon History, they will remember that an interesting discovery was found there, known as ‘The Kinderhook Plates’.  If this map is genuine, and Moroni went there, why would he go to a place where phony plates were buried in an attempt to fool Joseph Smith? And if this map was drawn at the direction of Smith, does this prove that he was taken in by the Kinderhook hoax?

120 Responses to An Interesting Discovery: A Map of the Travels of Moroni