The Deception and Fall of Apostle Albert Carrington

In a Note I recently wrote for my Facebook Page Mormon & LDS Facts, I detail what I’ve called “The deception and fall of Mormon Apostle Albert Carrington.” The Note can be found in its entirety here. (Update: This Note was removed by the author and this link is no longer active.)

The following is a brief summary of the Note: 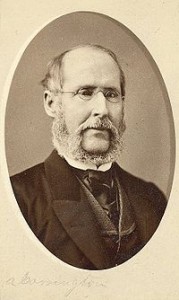 On January 7, 1867 Wilford Woodruff wrote in his journal that his fellow  “Apostle” Albert Carrington, and Carrington’s wife, had received the ordinance of the Second Anointing, which made their “calling and election sure.” By definition, this special priesthood ordinance (also called the “fulness of the priesthood”) ensures that the recipients are literally ordained to godhood. Those so ordained are ‘sealed by the Holy Spirit of Promise’ and thereby granted the assurance that they are “equal in power, and in might, and in dominion” with God Himself. This is supposedly accomplished by the ‘spirit of revelation’ so candidates (“whose faith and integrity are unquestioned”) are guaranteed their godhood. The Covenant sealed on the foreheads of Parents who have received their Second Anointing also secures for their children the promise that they will not fall, and that they “shall all sit upon thrones as one with the Godhead, as joint Heirs of God with Jesus Christ.”

We are told that this “spirit of revelation” is what guides the Mormon Church, and so these men, these “apostles and prophets,” that give these second anointings are given “the power of discernment” to distinguish good from evil (Moro. 7:12-18), the righteous from the wicked (D&C 101:95), and false spirits from divine (D&C 46:23), and that its more sensitive operation can also make known even the thoughts and intents of the heart of other persons (D&C 33:1). This “gift of discernment,” essential to every member of the Church, also embodies the power to discriminate between right and wrong.

What better person to ordain to godhood than Albert Carrington? Having joined the Church in 1841, he knew the prophet Joseph Smith, embraced polygamy, and was a Counselor to Brigham Young in addition to his ordination to the highest office in the Church, the Holy Apostleship. Unlike “Christendom” as Albert Carrington testified in 1880,“with its almost numberless free schools and its millions of bibles and legions of priests” who “spurned God’s word through the Prophet Joseph Smith,” Carrington knew Mormonism was true, and stated emphatically in that speech:

Three years later while serving on a mission to England, it would be reported that a maid Carrington had hired to clean the Mission Offices was seen “lying on his body.” During a meeting to address that, and other charges of impropriety, Carrington told the assembled hierarchy of the Church that there was “no criminality on his part,” and never in his life, had he “any connection with any female other than his wives, either at home or abroad” because “the Lord had preserved him free from anything of that kind.” As recorded in the official Minutes, church officials were satisfied with Carrington’s testimony.

But in the fall of 1883, Mormon “Apostle” John W. Taylor received a letter from the irate husband of the same maid, claiming that Carrington had indeed committed adultery with her. Called before his brethren a second time, Carrington admitted that he had lied, and that this maid was not the only one with whom he had broken his covenants. Carrington was cut off from the Church a few days later, “for the crimes of Lewd and Lascivious conduct and adultery.”

In the conclusion of the full Note, I write that Carrington, in his first meeting on charges of impropriety,

“was affirmed in his calling without question, by a vote. There is no mention in the Minutes of any of them petitioning the Lord for guidance, or that they felt it necessary to do so. One would think that this would have been the first thing that they did.”

I also ask the following questions:

“Are we to trust the words of Albert Carrington, that he is telling the truth when he declares that Joseph Smith was a prophet? How can we believe him when he says that ‘I am telling you the truth, as God lives I know it for myself’? And how can we trust those ‘apostles and prophets’–who were so easily deceived by Carrington–with our eternal salvation?”

If Carrington lied to his fellow “prophets, seers and revelators,” and they were powerless to “detect the thoughts and intents of his heart,” are we to believe that these men are what they claim–the very “oracles of God”? If these men who judged Carrington were so easy to deceive, then what does that say about the current “apostles” and “prophets” of the Mormon Church who also claim this same “gift of discernment,” and that they speak for God, and more importantly, as God?

92 Responses to The Deception and Fall of Apostle Albert Carrington