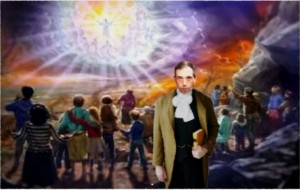 Joseph Smith made some crucial prophecies about the Second Coming that caused many other Mormon “authorities” to make additional ones, and voice the expectation that the United States would be destroyed as a nation, and Jesus would return by the end of the nineteenth century. On February 14, 1835 Smith called a meeting and said it was “being held because God commanded it by vision and by the Holy Spirit.” During that meeting Smith spoke of their trials at Zion’s Camp and added,

“God had not designed all this for nothing, but he had it in remembrance yet, and those who went to Zion, with a determination to lay down their lives, if necessary, it was the Will of God, that they should be ordained to the ministry and go forth to prune the vineyard for the last times, or the coming of the Lord which was nigh, even fifty six years, should wind up the scene.”

Several men were blessed by Joseph and the three witnesses, including Brigham Young, and Heber C. Kimball, that they would “see the Saviour come and stand on the Earth with power and great glory,” and “live until the gathering was accomplished.” Brigham Young was blessed to “go forth and gather the Elect preparatory to the great day of the coming of the Lord” (Minutes, Kirtland, Ohio, 14–15 Feb. 1835; handwriting of Warren Cowdery; in Minute Book 1, pp. 147–154; CHL.).

As early as 1831 Lyman Wight, while being ordained to the priesthood by Joseph Smith, prophecied (while Smith’s hands were still upon his head) “that there were some in this congregation that should live until the Savior shoud decend from heaven, with a Shout, with all the holy angels with him.” (Book of John Whitmer, 69–71.)

Just two years before, Smith prophesied (again by way of commandment) that “by the authority of Jesus Christ” that “not many years shall pass away” before the wicked “of this generation” will be swept from off the face of the land and the Lost Ten Tribes will be gathered to Missouri, and that “there are those now living upon the earth whose eyes shall not be closed in death until they see all these things, which I have spoken, fulfilled.” He exhorts all to “flee to Zion, before the “overflowing scourge overtake you” (History of the Church, 1:315-316).

Elaborating on the above, Smith added,

“I prophesy in the name of the Lord God, and let it be written—the Son of Man will not come in the clouds of heaven till I am eighty-five years old. Then read the 14th chapter of Revelation, 6th and 7th verses—‘And I saw another angel fly in the midst of heaven…’ And Hosea, 6th chapter, After two days, etc.,—2,520 years; which brings it to 1890. The coming of the Son of Man never will be–never can be till the judgments spoken of for this hour are poured out: which judgments are commenced. Paul says, ‘Ye are the children of the light, and not of the darkness, that that day should overtake you as a thief in the night.’ It is not the design of the Almighty to come upon the earth and crush it and grind it to powder, but he will reveal it to His servants the prophets. (History of the Church 5:336-337, April 6, 1843; Teachings of the Prophet Joseph Smith, p. 286; Joseph Smith was born Dec. 23, 1805, which means the Second Coming would take place after Dec. 23 1890.)

Smith gives us the math and the date, confident that God had “revealed it” to his “prophets.” In the same year, he again said,

“I prophecy in the name of the Lord God of Israel, unless the United States redress the wrongs committed upon the Saints in the state of Missouri and punish the crimes committed by her officers that in a few years the government will be utterly overthrown and wasted, and there will not be so much as a potsherd left…” (History of the Church, 5:394)

Orson Hyde, convinced of the coming apocalypse, declared that the gospel had been preached to the world, and that the “saints” were being gathered to Utah, to escape it:

“These missionaries and labourers are now called home. The Lord says, ‘It is enough.’ ‘Come out of her, my people,’ is now the voice of God to his servants in every land and nation. The vials of his wrath cannot be poured out until you, like Lot, flee from the countries doomed to feel the vengeance of God. To you, my faithful brethren abroad, the Spirit of Christ has often whispered, during the last six months, ‘Go home—go home.’ Your guardian angels have said it to you in dreams and in visions, and we expect to see you come. Scores have already arrived. God bless them and you too, if you listen to the whisperings of that voice that speaks truth to the heart.

“Again, the sign gives in the Book of Mormon, showing when the times of the Gentiles shall be fulfilled and they abandoned to the judgments and wrath of Almighty God, and showing also when the covenants of the Father with the house of Israel shall be fulfilled, is this important declaration—‘I will take the fulness of my Gospel from among the Gentiles,’&c. It might be considered treason to quote further. With our Elders and missionaries comes the fulness of the Gospel from among the Gentiles, who, like the leaky ship, are abandoned to the mercy of the winds and the waves.” (Journal of Discourses, Vol. 6, p. 16)

Why does Orson Hyde speak of treason? Because they believed that the United States was to be broken up and Brigham Young would be installed as President (Journal of Discourses, Vol. 5, p. 219). In 1857, Wilford Woodruff records Brigham Young saying about then President Buchanan, “I should not wonder if we heard he was dead soon” (Wilford Woodruff Journal, Vol. 5, p. 72).

Wilford Woodruff referred to himself as a “Prophetic Historian” (Journal, Vol. 5, p. 615), and wrote constantly about the end of the world. At the end of 1857 Woodruff writes,

“The Same God who inspired our Fathers to Esstablish a Free government said through the prophet Joseph Smith that if ever the Constitution of the United States or its principles were ever preserved it would have to be done by the Church of Jesus Christ of Latter Day Saints even the servants of God Holding the Holy priesthood. That day has now Come& the day is dawning when we are Called to act. The Same God who has destroyed two Nations who have dwelt upon this Continent because of their iniquity, has also said that all other Nations who should occupy this Continent when they were ripened in iniquity should in like manner be Cut off from the earth and not left to pollute the Land of Joseph or the Land of Zion. I do not know what Els our Nation can do in order to fill up their Cup of iniquity than what they have done and are doing. I do not know of any other key [p.142] the United States Can turn to seal fast their Condemnation than the Exertions which they are makeing to destroy the Saints of God for their religion. I am in For the measure because it is right.” (Wilford Woodruff Journal, Vol. 5, pp. 141-142, original spelling retained in all quotes)

“1857 will be the year on histories page which will be dated the Commencement of the downfall of the United States.” He then states, “the Judgments of God will now begin to rest more fully upon that Nation and will be increased upon them year by year untill they are broaken up and wasted away from under Heaven and Cease to become a Nation. And this Calamity will begin to Come spedily upon them. And they will be visited with thunder, lightning, storm, whirl winds Earthquakes floods, pestilence plagues, war and Devouring fire and the wicked will slay the wicked untill the Nation is wasted away and broaken up” (Wilford Woodruff Journal, Vol. 5, p. 145).

“I will state as a prophecy, that there will not be an unbelieving Gentile upon this continent 50 years hence; and if they are not greatly scourged, and in a great measure overthrown, within five or ten years from this date, then the Book of Mormon will have proved itself false.” (Parley P. Pratt, MORMONISM UNVEILED, Zion’s Watchman Unmasked, AND ITS EDITOR MR. L. R. SUNDERLAND, EXPOSED: TRUTH VINDICATED: THE DEVIL MAD, AND PRIESTCRAFT IN DANGER! by P. P. PRATT, NEW YORK, Printed for the Publisher, 1838, pp. 15-16)

Having been charged with being “vague” and “indefinite,” Pratt writes that he hopes with the giving of this prophecy that critics “will no more complain of the jargon of the Mormon Prophets being unintelligible or indefinite” (Pratt, op. cited above).

There are many more such “prophecies” by Mormon “prophets, seers & revelators” that all attest to the fact that those born in Joseph Smith’s time, would live to see the Second Coming, that the United States would be swiftly destroyed, and that the “Mormon Elders” would step up and “save the Constitution.” The America that Mormon “prophets” foresaw however, is not the America that has come to be, and with a Mormon being seriously considered as the next President of the United States, it may be well to take heed of their failed vision of America from the not too distant past.

26 Responses to The America That Mormon Prophets Never Foresaw