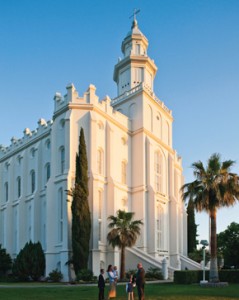 “This is a country that believes in the Bible, the Bible speaks about providing tithes and offerings, I made a commitment to my church a long, long time ago that I would give 10 percent of my income to the church, and I’ve followed through on that commitment. And hopefully as people look at the various individuals who’re running for president they’d be pleased with someone who made a promise — a promise to God — and kept that promise. So, if I had given less than 10 percent then I think people would have to look at me and say, ‘Hey, what’s wrong with you fella — don’t you follow through on your promises?’” (Find this exchange at the video’s 10-minute mark.)

The clear implication found in Mr. Romney’s remark is that he is one who keeps his promises to God and church. Given that, perhaps it would be of interest to think about additional promises Mr. Romney (and other Mormons) have made to God.

Like many other Mormons, as a young man Mitt Romney attended a Mormon temple to receive his Endowments. This ceremony is currently described within Mormonism in this way:

“Your Endowment is to receive all those ordinances in the House of the Lord, which are necessary for you, to enable you to walk back to the presence of the Father, passing the angels who stand as sentinels, being enabled to give them the key words, the signs and tokens, pertaining to the Holy Priesthood, and gain your eternal exaltation.”

During the Endowment Ceremony patrons (i.e., the Mormons who are participating) are required to make several promises to God. [Since Mitt Romney committed to his temple covenants in 1966, the quotes that follow are from a 1969 transcript of the ceremony, provided by “a temple worker” and printed in Tanners’ Mormonism – Shadow or Reality. The current temple ceremony may be worded a bit differently.]

As the Endowment Ceremony begins, patrons are warned,

“If you proceed and receive your full endowment, you will be required to take upon yourselves sacred obligations, the violation of which will bring upon you the judgment of God; for God will not be mocked.”

Seven times in the Endowment Ceremony each patron is required to “covenant and promise” that s/he will do specific things.  Three of these promises are related to the “tokens” [i.e., handshakes or grips] of the Aaronic and Melchizedek priesthoods. For three tokens the patron promises essentially the same thing:

“I, [name] do covenant and promise that I will never reveal the [specific token], together with its accompanying name, sign and penalty. Rather than do so I would suffer my life to be taken.”

While making these promises (in 1969), the patron pantomimes the execution of the penalties associated with his “life [being] taken” should he go back on his word. He is instructed relative to each token:

“The execution of the penalty is represented by placing the thumb under the left ear, the palm of the hand down, and by drawing the thumb quickly across the throat to the right ear, and dropping the hand to the side.” [According to the earlier wording of the Endowment Ceremony as contained in the 1931 book, Temple Mormonism, this signifies the patron having his throat cut.]

“The execution of the penalty is represented by placing the right hand on the left breast, drawing the hand quickly across the body, and dropping the hands to the sides.” [Signifying having his heart cut out.]

“The execution of the penalty is represented by drawing the thumb quickly across the body and dropping the hands to the sides.” [Signifying being disemboweled.]

It’s easy to see why Mitt Romney and other Mormons do not want to talk about the specifics of their temple experiences. According to the promises they’ve made, they are willing to die in rather gruesome ways rather than reveal “the key words, the signs and tokens” required to enter into “the presence of the Father, passing the angels who stand as sentinels.”

Four additional promises are required from those who participate in the Mormon Endowment Ceremony. These are promises and covenants that the patron will obey certain laws defined by the Mormon Church:

Law of Obedience: “…each of you do covenant and promise that you will obey the law of God, and keep His commandments.”

Law of Sacrifice: “…the Law of Sacrifice as contained in the Old and New Testaments, which is that you do sacrifice all that you have, including your own lives, if necessary, for the building up of the kingdom of God on the earth.”

“…you do covenant and promise before God, angels, and these witnesses at this altar that you will keep the Law of Sacrifice…which has been explained to you.”

Law of the Gospel: “We are instructed to give you the Law of the Gospel, also a charge to avoid all lightmindedness, loud laughter, evil speaking of the Lord’s Anointed, the taking of the name of God in vain and every other unholy and impure practice.”

“…you do covenant and promise before God, angels, and these witnesses at this altar that you will keep the Law of the Gospel as it has been explained to you.”

Law of Consecration: “…you do covenant and promise before God, angels, and these witnesses at this altar that you will keep the Law of Consecration…which is that you do consecrate yourselves, your time, talents and everything with which the Lord has blessed you or with which He may bless you to The Church of Jesus Christ of Latter-day Saints, for the building up of the Kingdom of God on the earth [i.e., the LDS Church] and for the establishment of Zion [i.e., a unified society of God’s covenant people — the LDS Church].”

Mormons make other formal promises to God, too — when they are baptized, when they are married, when they participate the sacrament at their church every Sunday (etc.) — but the seven detailed above provide plenty of food for thought. I’ll leave it to you, readers, to draw your own conclusions on how any of these commitments to God might be interpreted and acted upon by the Mormons who promise to keep them.

Sharon surrendered her life to the Lord Jesus Christ in 1979. Deeply passionate about Truth, Sharon loves serving as a full-time volunteer research associate with Mormonism Research Ministry. Sharon and her husband live in Minnesota.
View all posts by Sharon Lindbloom →
This entry was posted in Mormon Temple and tagged Endowment, Mitt Romney, Temple. Bookmark the permalink.