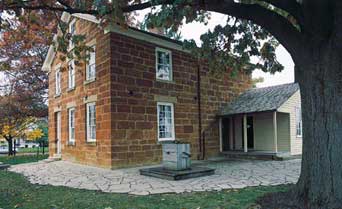 Visiting the Nauvoo, Illinois area this week, I took a tour of Carthage Jail on Tuesday. Many thanks to Sister B. for accommodating my arrival after hours (new winter hours close the site at 4:00 p.m.). I did not get to see the film, but my friend and I were treated to an unhurried, private tour of the jail led by a veteran missionary (this is Sister B.’s sixth mission for the Mormon Church!). Here are a few things I learned from Sister B. and an elder who stuck his head into the dungeon cell for a few minutes during our tour.

I’ve toured Carthage Jail many times, yet every time I go I learn something new.

It’s a shame that much of what I learn is rooted in pure emotion rather than in historical fact.

Sharon surrendered her life to the Lord Jesus Christ in 1979. Deeply passionate about Truth, Sharon loves serving as a full-time volunteer research associate with Mormonism Research Ministry. Sharon and her husband live in Minnesota.
View all posts by Sharon Lindbloom →
This entry was posted in Joseph Smith, Mormon Culture and tagged Carthage Jail, Joseph Smith, Martyrdom. Bookmark the permalink.

69 Responses to Legends of Joseph