Is the “church” established on any man? 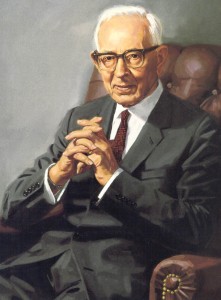 I have just finished reading through the entire gospel doctrine series called “Teachings of the Presidents of the Church” series, including the newest volume dedicated to Joseph Fielding Smith. Smith was known for being a church theologian, penning the massive three-volume set Doctrines of Salvation as well as the five volumes comprising Answers to Gospel Questions.

Smith, who is a direct descendant of Joseph Smith’s brother Hyrum, is the son of sixth president Joseph F. Smith. He is known for stating things as they were. He didn’t mince words in his writings, an attribute that I believe his son-in-law Bruce R. McConkie later picked up and turned into his style.

After having read the 2013 manual made up of Smith’s teachings and how much of what he is quoted as saying is truly innocuous, I was seriously longing for the days of old when the leaders and the manuals were more upfront. From my shelf I picked up Smith’s book Selections from Answers to Gospel Questions, which was “a course of study for the Melchizedek Priesthood Quorums 1972-73.” What makes this book different from Smith’s other writings is that this was published by the LDS Church’s First Presidency backed in the 1970s and was considered “official.”

Honestly, there are so many more “quotable” statements in this older book than what can be found in the newest manual. The church seems so much more cautious in what it prints these days. For example, I turned to Lesson 25 in Selections from Answers to Gospel Questions and, after quoting Matthew 16:13-19 (speaking about Peter and the “rock”), found the following quote in the section titled “The Church is Not Established on Any Man”:

“The interpretation placed on this conversation by the Catholics is extremely absurd. It is contrary to reason to think that the Lord would establish his Church upon any man, no matter how faithful and wonderful he might be.” 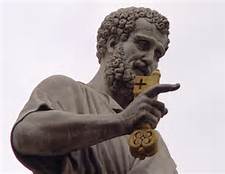 First of all, I love how Smith used the word absurd. Can you imagine seeing that word used in a manual today in reference to the Catholics or Protestants? I like it when the LDS leadership throws away political correctness and tells us what they really think rather than hide behind niceties.

What I find even more amazing is how Smith criticized the Catholics for placing too much emphasis on Peter. Yet let’s consider the life of Joseph Smith, the founder of Mormonism. This is a person of whom President Heber J. Grant once said, “The whole foundation of this Church rests firmly upon the inspiration of the living God through Joseph Smith the Prophet” (Teachings of Presidents of the Church: Heber J. Grant, p. 16).

In the Melchizedek manual referred to above, listen to what Joseph Fielding Smith said:

“No one else, but Joseph Smith, has ever made the claim that this restoration and setting up of the kingdom (i.e. Church of Jesus Christ) has ever been revealed. Joseph Smith as proclaimed to the world that power, keys, and authority were bestowed upon him. No one else has arisen to make such a claim; yet, this was revealed preparatory to these momentous and final restorations” (Selections, p. 338).

How important is Joseph Smith to the Mormon religion? Let me share several additional quotes that support my case:

Brigham Young: “I honor and revere the name of Joseph Smith. I delight to hear it; I love it. I love his doctrine” (Teachings of Presidents of the Church: Brigham Young, p. 345).

“Whosoever confesseth that Joseph Smith was sent of God to reveal the holy Gospel to the children of men, and lay the foundation for gathering Israel, and building up the Kingdom of God on the earth, that spirit is of God, and every spirit that does not confess that God has sent Joseph Smith, and revealed the everlasting Gospel to and through him, is of Antichrist, no matter whether it is found in a pulpit or on a throne” (Discourses of Brigham Young, p. 435).

George Albert Smith: “Many of the benefits and blessings that have come to me have come through that man who gave his life for the gospel of Jesus Christ. There have been some who have belittled him, but I would like to say that those who have done so will be forgotten and their remains will go back to mother earth, if they have not already gone, and the odor of their infamy will never die, while the glory and honor and majesty and courage and fidelity manifested by the Prophet Joseph Smith will attach to his name forever” (Teachings of Presidents of the Church: George Albert Smith, p. 34).

Harold B. Lee: “We must accept the divine mission of the Prophet Joseph Smith as the instrumentality through which the restoration of the gospel and the organization of the Church of Jesus Christ was accomplished. Each member of the Church, to be prepared for the millennial reign, must receive a testimony, each for himself, of the divinity of the work established by Joseph Smith” (Teachings of Presidents of the Church: Harold B. Lee, p. 71).

I’m not suggesting that Mormons somehow worship Smith any more than Catholics worship Peter—that’s not my case nor my point. What I am saying is that, according to LDS leaders, Mormonism truly has been established upon the name of Joseph Smith.

75 Responses to Is the “church” established on any man?