In an article found in an LDS Church manual (The Pearl of Great Price Teacher Manual Religion 327, pp. 54-55) that gives instructions to the LDS instructors comes this amazing statement: 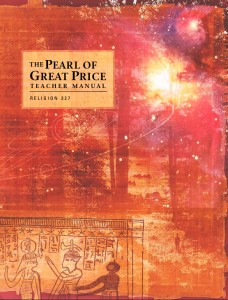 Have students read the five italicized summary statements that are found throughout Joseph Smith—History and list the major events that are described in the text. Write the following five statements on the board:

God the Father and His Son Jesus Christ have appeared to mankind in modern times.

There was an apostasy of the true Church.

Joseph Smith was a prophet of God.

The Book of Mormon is the word of God.

The Church of Jesus Christ has been restored

Ask students: If any one of these statements were false, how would that affect the other statements, and why?

I’m not sure what the church leaders expect the answer to be, but may I take my shot at what seems to be a rhetorical question: If any of these statement are false and Mormonism is based on fiction, the whole set of dominoes comes tumbling down.

If you haven’t familiarized yourself with the “Swedish Rescue,” you really ought to do so. (Here is a good place to start: http://www.mrm.org/fiery-fireside .) In this meeting with disaffected and questioning Latter-day Saints that took place a few years ago, two LDS historians provided practically no satisfactory answers to any of the members’ objections. For instance, the Swedish Saints brought up the following issues: 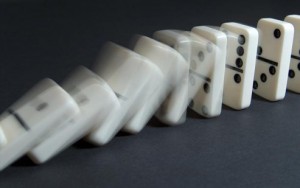 Not discussed in the manual but brought up by the Swedes were the Adam-God doctrine and the credibility of the Book of Abraham. With so many problematic historical issues, the credibility of Mormonism is at stake. The same is true for the historic Christian church if there was evidence that Jesus, who claimed to be the Messiah, was an imaginative creation of later followers or if the resurrection of this man was doubtful (see 1 Corinthians 15); as Paul put it, Christians would be the most pitied of all people as they would be placing their faith in something that did not conform to the facts.

In the past few months, the LDS Church has uploaded articles on the LDS.org website to deal with such sensitive issues as plural marriage, blacks, and the Book of Mormon. (Could the sudden responses to such controversial issues be related to the “Swedish Rescue”? Quite possibly.) Reasons (excuses) are provided to distance the current church’s leadership from these topics. Yet numerous LDS leaders before 1890 (for plural marriage) and before 1978 (for blacks and the priesthood) can be quoted over and over again, as they were strong supporters of what they called “doctrine” (not theory). And plenty of statements from leaders in both the 19th and 20th centuries can be easily culled to show how these men believed the Lamanites were ancestors of the Native Americans.

Referring specifically to the Book of Mormon, the teacher’s manual quoted above goes on to say, “Bear your testimony of the truth of the events described in Joseph Smith—History, and invite students to share their thoughts and feelings.”

Notice the wording: “bear your testimony” as well as “share” “thoughts and feelings.” Unfortunately, too many faithful Mormons compartmentalize the history of the church. They bury the problematic teachings and retreat to their “testimony,” using a fideistic “faith above the facts” to minimize the damage. Fortunately, we have seen more and more people who, after being exposed to this questionable history, end up leaving Mormonism. For example, we just received an email from one “soon-to-be ex-Mormon” who said his discovery of Joseph Smith’s polygamous/polyandrous ways four months ago was earth-shattering for him; his official time in the church appears to be short. Just a few months ago we met an ex-Mormon at one of our local meetings who shared how his departure from the LDS faith came when he tried to disprove some historical points that we made on our radio show/podcast (Viewpoint on Mormonism). This gentleman said he ended up leaving his LDS faith and became a Christian because he found out that his presuppositions were in error as he attempted to defend the official church history.

I believe that those Latter-day Saints who are willing to open their eyes and do their homework will come to the conclusion that Mormonism, as Buddy from the movie Elf once stated, sits on a throne of lies. If the quote from the teacher’s manual would be read and considered by every thinking Mormon, imagine the mass exodus that would ensue!

30 Responses to Going After Historical Issues