What Do Mormon Missionaries Teach?

In the FAQ section at Mormon.org is found the question, “What will the [LDS] missionaries talk about when they visit my home?” The answer, as provided by the Mormon Church:

“Missionaries share a message about Jesus Christ and His Atonement for all people. They teach about our Heavenly Father’s great plan of salvation, which allows all people the opportunity to return to Him.” 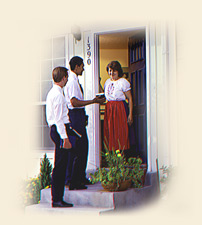 This would probably come as no surprise to anyone sincerely asking the question, and, of course, it’s true – as far as it goes. But the answer really does not go very far at all. If you are thinking about inviting strangers into your home, you want to know what to expect from these strangers in order to determine whether (or not) it’s a good idea to extend the invitation. The Mormon.org reply doesn’t really provide enough information to help you make that decision. Therefore, a more detailed overview of what the Mormon missionaries will talk about if/when they visit your home is provided here.

According to the Mormon Church’s Guide to Missionary Service, Preach My Gospel, the first lesson missionaries teach is called “The Message of the Restoration of the Gospel of Jesus Christ.” The stated purpose of the lesson is for missionaries to

The questions that investigators are to be prepared to answer correctly relate to: belief in God as Father; Christ as the Son, Savior and Redeemer; that the gospel has been restored through Joseph Smith; and that Thomas Monson is a prophet of God. The commitments listed are: read and pray about the Book of Mormon; pray to know Joseph Smith was a prophet; attend the Mormon church the following Sunday; make an appointment for the missionaries’ next visit; and others as the missionaries may deem appropriate for each individual investigator (e.g., quit smoking or stop working on Sundays).

It might be important for you to know up front that the primary purpose of Mormon missionaries visiting your home is not to talk about Jesus and His atonement, but rather to extract commitments that will qualify you for Mormon baptism.

Of course, these commitments are not all there is to the missionary visit. The missionaries will talk about Jesus, His atonement, and the plan of salvation (according to Preach My Gospel). The bullet points of the first missionary lesson are these:

Additionally, at the end of this, the very first lesson, missionaries are instructed, “do not hesitate to invite people to be baptized and confirmed” (Preach My Gospel, 40).

This is what you can expect the Mormon missionaries to talk about the first time they visit your home (or the first time they teach you a lesson). They will mention Jesus and His atonement but, as instructed, their principle focus will be talking about The Church of Jesus Christ of Latter-day Saints, Joseph Smith, the Book of Mormon and LDS Church membership (in short, “The Restoration”). This is in sharp contrast to the message Christian missionaries are called to proclaim:

“But what does it say? ‘The word is near you, in your mouth and in your heart’ (that is, the word of faith that we proclaim); because, if you confess with your mouth that Jesus is Lord and believe in your heart that God raised him from the dead, you will be saved. For with the heart one believes and is justified, and with the mouth one confesses and is saved. For the Scripture says, ‘Everyone who believes in him will not be put to shame.’ For there is no distinction between Jew and Greek; for the same Lord is Lord of all, bestowing his riches on all who call on him. For ‘everyone who calls on the name of the Lord will be saved.’ How then will they call on him in whom they have not believed? And how are they to believe in him of whom they have never heard? And how are they to hear without someone preaching? And how are they to preach unless they are sent? As it is written, ‘How beautiful are the feet of those who preach the good news!’” (Romans 10:8-15)

When Mormon missionaries visit your home for the first time they will bring you a message about The Church of Jesus Christ of Latter-day Saints and talk to you about setting a date to be baptized and confirmed as a member of that church. Christian missionaries, on the other hand, do not point to a church; they point to Christ. As Paul said above, they preach “the good news.” This isn’t good news about a church or a modern prophet or a new religious book; this is very specific good news. As Luke explained elsewhere in the Bible, Christians preach “the good news about Jesus” (Acts 8:35). Christian theologian John Piper explained,

“…what makes the gospel ‘good news’ is that it connects a person with the ‘unsearchable riches of Christ.’…

“Therefore to believe the gospel is not only to accept the awesome truths that 1) God is holy, 2) we are hopeless sinners, 3) Christ died and rose again for sinners, and 4) this great salvation is enjoyed by faith in Christ — but believing the gospel is also to treasure Jesus Christ as your unsearchable riches…

“The gospel is the good news that the everlasting and ever-increasing joy of the never-boring, ever-satisfying Christ is ours freely and eternally by faith in the sin-forgiving death and hope-giving resurrection of Jesus Christ.”  (John Piper, “What is the Christian Gospel”)

How beautiful are the feet of those who preach this good news — the good news of Jesus!

34 Responses to What Do Mormon Missionaries Teach?