James Talmage: Almost Charged With Apostasy for Writing That The Holy Ghost was a Person

Posted on October 16, 2014 by Aaron Shafovaloff

Excerpted from James P. Harris’ foreword to The Articles of Faith (First Edition): 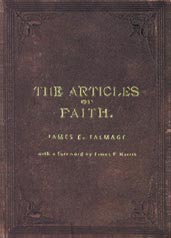 Another theme that occupied Talmage’s attention was related to the Holy Ghost. Talmage wrote:

Met with Theological Class Committee and [First] Presidency in lecture work. The subject of “The Holy Ghost” formed the topic. Pres. [George Q.] Cannon in commenting on the ambiguity existing in our printed works concerning the nature or character of the Holy Ghost expressed his opinion that the Holy Ghost was in reality a person, in the image of the other members of the Godhead,—a man in form and figure: and that what we often speak of as the Holy Ghost is in reality but the power or influence of the Spirit. However the Presidency deemed it wise to say as little as possible on this or other disputed subjects.20

One of the questions referred to the First Presidency by the Committee was as to the advisability of reprinting the lecture entitled “The Holy Ghost” which appeared in the “Juvenile Instructor” soon after its delivery in the theology class of the Church University. I remember that considerable discussion attended the reading of the lecture before the former committee prior to its delivery … The question hung upon the expediency and wisdom of expressing views as definite as those presented in the lecture regarding the personality of the Holy Ghost when marked ambiguity and differences of opinion appeared in the published writings of our Church authorities on the subject. The lecture was approved as it appeared in the “Instructor.” I have incorporated it in the prospective book in practically an unaltered form. President [Lorenzo] Snow took the article under advisement today. In conversation Pres. Geo. Q. Cannon supported the view of the distinct personality of the Holy Ghost and stated that he had [here the word “actually” is crossed out] heard the voice of the third member of the Godhead, actually talking to him.

Finally, on 16 January 1899, Talmage recorded that “President [Lorenzo] Snow announced his unqualified approval of the lecture on the ‘Holy Ghost’; and directed its insertion.”

Not recorded in Talmage’s journal is the level of anxiety this issue aroused. When he was subpoenaed in 1905 to testify before the U. S. Senate committee investigating Utah senator Reed Smoot’s position as an apostle in the LDS church, Talmage was asked whether a charge of apostasy had been levied against him during the writing of The Articles of Faith. He replied, “No charge was actually made, though I was notified I would be so charged. But as one of the church officials had already expressed as holding the views set forth by myself in that work, and he being very much larger game, he was singled out first, and as the proceedings against him ended in a disappointing way, I was never brought to trial.”22 It was never clarified who the “very much larger game” was or what the exact charges were. However, judging from Talmage’s remarks on 13 January 1899, the Holy Ghost lecture may have been what elicited the charge of apostasy against him.

14 Responses to James Talmage: Almost Charged With Apostasy for Writing That The Holy Ghost was a Person