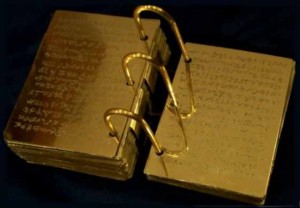 Joseph Smith, the first Mormon Prophet, claimed he was divinely guided to a set of gold plates that were buried near his home in the state of New York. After taking possession of these plates, according to the official LDS account, Joseph translated the ancient writing they contained, which resulted in the Book of Mormon.

Using eyewitness accounts in the video below, researcher Dan Vogel takes a look at the story of Joseph Smith bringing the gold plates home from where they were buried in the Hill Cumorah. Mr. Vogel’s telling of the story begins with Joseph’s employment as a money-digger in 1826, and continues through December of 1827 when Joseph and his wife Emma fled town with the gold plates secreted in a barrel of beans.

In examining these few months of Mormon Church history, Mr. Vogel notes discrepancies and suggests some alternate explanations for certain claims made in the Mormon Church’s official narrative.

As I watched this 46-minute video, I couldn’t help but think that a Mormon’s reaction to the information might be, “Those darn plates!” If Joseph Smith had merely claimed a vision or revelation, the story would be much less problematic for Mormons to maintain (of course, the Book of Mormon itself would still be fraught with problems).

But because Joseph Smith brought tangible evidence into the mix in the form of the alleged gold plates, as well as his detailed efforts to gain and keep possession of them, many objective facts exist by which to measure the veracity of his story. From the weight and material of the plates, to the “spectacles” found with the plates, to Joseph’s injury fighting off attackers, to the efforts of evil men trying to steal Joseph’s treasure, Mr. Vogel presents various historical voices that fill out and go beyond the carefully crafted official Mormon narrative. These eyewitness accounts serve to contextualize and expand the viewer’s understanding of events comprising the birth of Mormonism, but they also tend to elicit troublesome questions for thinkers. Those darn plates!

“Joseph Smith claimed he translated the Book of Mormon from anciently engraved gold plates, which he took from a stone box in the side of a hill near his home in Manchester, New York. Claiming that he was forbidden by God to show them to anyone, Smith kept the plates carefully wrapped in a cloth or concealed in a wooden box. Believers accept this as God’s way of requiring faith, whereas skeptics suspect Smith constructed a set of plates that couldn’t pass visual inspection. This is the story of Joseph Smith’s bringing the plates home in September 1827.”