In the August 2015 Ensign magazine is an anonymous article on page 10 titled “We Believe in Being Humble.” On the opposite page are artistic renderings depicting five ways a person “can show humility”: “receiving counsel and correction,” “giving selfless service,” “praying with real intent,” “serving a mission,” and “doing family history work and attending the temple more frequently.”

In Mormonism, those are all admirable goals. As President Ezra Taft Benson, who is quoted five times in this one-page article, stated, “The antidote for pride is humility—meekness, submissiveness. It is the broken heart and contrite spirit.”
Reflecting on this six-paragraph article, it made me think. First of all, it reminded me of the famous quote given by Joseph Smith toward the end of his life. On May 26, 1844—just a month before he would die at the Carthage Jail—Smith presented “his testimony against the dissenters at Nauvoo.” The talk, which can be in History of the Church 6:408-409, referenced 2 Corinthians 11:1ff and quotes Smith as saying,

“Come on! ye prosecutors! ye false swearers! All hell, boil over! Ye burning mountains, roll down your lava! for I will come out on the top at last. I have more to boast of than ever any man had. I am the only man that has ever been able to keep a whole church together since the days of Adam. A large majority of the whole have stood by me. Neither Paul, John, Peter, nor Jesus ever did it. I boast that no man ever did such a work as I. The followers of Jesus ran away from Him; but the Latter-day Saints never ran away from me yet.”

Some Latter-day Saints have argued that Smith was doing nothing more than Paul, who had “boasted” about his travails in a defense of his apostleship. Yet does Joseph Smith’s situation really compare with Paul’s? After all, Paul was innocent of the charges leveled at him. How about Joseph Smith? The Nauvoo Expositor—the one and only issue produced—explained some of the shortcomings of Joseph Smith, including his polygamous ways. (More on how Smith married about three dozen women, including teenagers and women married to living husbands, can be found at Joseph’s Wives.com) In addition to those charges, Smith was proven to be a liar (including deceiving his own wife on his other marriages) as well as a false teacher (for instance, consider the King Follett Discourse). In no way should Joseph Smith be considered in the same category as “Paul, John, Peter, (or) Jesus.”

Several passages in the Book of Mormon talk about humility, including Alma 5:27, which says,

“Have ye walked, keeping yourselves blameless before God? Could ye say, if ye were called to die at this time, within yourselves, that ye have been sufficiently humble? That your garments have been cleansed and made white through the blood of Christ, who will come to redeem his people from their sins?”

Notice how the writer explains that it is the blood of Jesus cleansing people from their sins. While Mormons like to talk about the Atonement, grace, and mercy as reasons why they have a hope at exaltation, how many of them actually think they are doing everything they’re supposed to in order to qualify for the celestial kingdom? They all “try” and “do the best” they can, but I rarely find anyone who can attest that they are doing everything the church requires.

When it comes to “doing family history work and attending the temple more frequently,” as the final illustration explains on page 11, I ask: What must a person do in order to get invited into the temple? Of course, baptism and confirmation into the LDS Church are required. In addition, the person must be a member in good standing for a year. The candidate is then interviewed by the church’s representative (the local bishop) to determine if he or she is “worthy” to receive a “temple recommend.” Among other things, this person must claim:

The last time I checked, none of the official questions ask the candidate if he or she is “cleansed and made white through the blood of Christ.” Rather, everything asked in this interview points to one’s own works and personal actions! This scenario sure sounds different from the 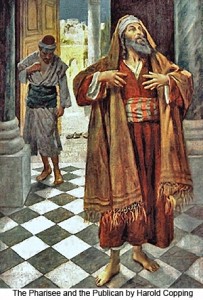 “God, I thank thee, that I am not as other men are, extortioners, unjust, adulterers, or even as this publican. I fast twice in the week, I give tithes of all that I possess.” (Luke 18:11,12).

The Pharisee’s attitude is not uncommon among many sincere people who erroneously think that their “good works” impress an all-holy God. The publican’s demeanor was entirely different. Knowing that he was sinful and undeserving of God’s notice, he approached God in the temple by praying, “God be merciful to me a sinner” (Luke 18:13). His attitude, not that of the Pharisee, caused our Lord to comment, “This man went down to his house justified rather than the other” (Luke 18:14).

In the interview with the church representative, a person is required to declare his or her righteousness to be allowed to enter the temple. And if the church’s unique rules are kept, the church provides its blessing and deems the person “worthy” to receive a temple recommend card, allowing freedom to walk in the holiest places where many others members (who are, obviously, not as “worthy”) are not allowed to tread. Doesn’t this entire procedure foster a sense of pride? For someone to think they’ve earned the right to enter this unique religious building because of their personal holiness or “worthiness” is opposite from the attitude the Bible says we’re supposed to have.

All in all, when I look at what Mormonism does to people, it seems that this religious organization turns out many more Pharisees than their leaders would ever admit.