When Moroni’s Promise is Broken

Posted on September 14, 2015 by Sharon Lindbloom 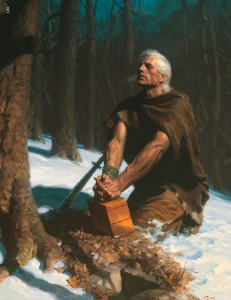 Most people who have experienced Mormon proselytizing are familiar with “Moroni’s Promise” found in the Book of Mormon:

“And when ye shall receive these things, I would exhort you that ye would ask God, the Eternal Father, in the name of Christ, if these things are not true; and if ye shall ask with a sincere heart, with real intent, having faith in Christ, he will manifest the truth of it unto you, by the power of the Holy Ghost.” (Moroni 10:4)

The idea here is that if someone wants to know if the Book of Mormon is true, he should apply Moroni’s promise. The result will be certain knowledge in the affirmative, imparted by the Holy Ghost. In Mormonism, this is called a “testimony.” Sounds good, but in real life it doesn’t always work out the way Moroni promises.

Years ago the LDS Ensign magazine included a regular column titled, “I Have a Question.” Mormons would submit their questions “of general gospel interest,” and would receive answers (“guidance, not as official statements of Church policy”) provided by qualified Church employees. In the March 1986 issue of Ensign, Daniel H. Ludlow, at that time the director of Church Correlation Review, provided an answer to this question:

“A friend of mine says he has prayed about the Book of Mormon but has not received a testimony of its truthfulness. Shouldn’t Moroni’s promise always work?”

“God cannot and does not lie, and his promises made through his prophets are sure. Therefore, any person who claims to have followed the various requirements but says he has not gained a testimony should check to see which step he has not followed faithfully or completely:

“1. He should read and ponder the Book of Mormon—all of it.

“2. He should remember the methods God has used in working with the peoples of both the Book of Mormon and the Bible—and ponder these things in his heart.

“3. He should put himself in a frame of mind where he would be willing to accept (receive) all of ‘these things’—the Book of Mormon, the Bible, and the way God works with men.

“4. ‘With a sincere heart, with real intent, having faith in Christ,’ he should ask God, the Eternal Father, in the name of Jesus Christ ‘if these things are not true.’

“5. He should be able to recognize the promptings and feelings which will be evidences to him of the truth of ‘these things’ (including the Book of Mormon) as they are made manifest unto him ‘by the power of the Holy Ghost.’” (This excerpt is also found in Book of Mormon Student Manual Religion 121 and 122, 1989, pages 150-151)

Dr. Ludlow sustained the widely held Mormon belief that it is impossible to properly employ Moroni’s promise without gaining a testimony that the Book of Mormon is true. I encounter this thinking quite frequently in my conversations with Mormons. When I explain that I prayerfully read the Book of Mormon and discovered that the book is not what it claims to be, my Mormon friends’ responses are predictable. They question my sincerity, my intent, and/or my faith. Just the other day a Mormon wrote me,

“…concerning your claim on reading the Book of Mormon. I invite you to read it prayerfully again with the question: ‘God is this a [sic] thy book like the bible is thine?’ Apparently, the first time through you missed the mark…”

According to Dr. Ludlow and countless other Mormons, if someone reads the Book of Mormon and does not receive a testimony of its truthfulness, something is wrong with the person – he missed a step, he wasn’t sincere, he didn’t have enough faith, etc.

While I fully agree with Dr. Ludlow’s statement that, “God cannot and does not lie, and his promises made through his prophets are sure,” I recognize another distinct possibility in the case(s) of the failure of Moroni’s promise. Dr. Ludlow neglects to consider this option; nevertheless, if God does not lie and His promises are sure, the failure of the Book of Mormon’s promise in Moroni could very well indicate that God never made that promise in the first place. This represents a perfectly valid conclusion, but in my experience, Mormons won’t consider this alternative.

It’s easy to understand why. If God is not the author of Moroni’s Promise: the Book of Mormon is not what it claims to be; a Mormon’s “testimony” becomes untenable; Joseph Smith is revealed as a false prophet; and The Church of Jesus Christ of Latter-day Saints can no longer be sustained as God’s kingdom on earth.

Think about it, friends. Study it out in your minds and join me in this prayer to the one true God:

17 Responses to When Moroni’s Promise is Broken