A Vision of Mormonism’s Premortality

Did you know that no women chose the side of Lucifer in Mormonism’s premortal War in Heaven? Of course, this is not official LDS Church doctrine, but according to a vision received by Mosiah Hancock in 1855, every female spirit chose to either side with Heavenly Father and Jesus Christ or to remain neutral during the premortal rebellion. However, this caused an uneven proportion of male to female spirits, which, according to Mosiah, brought on problems of its own. 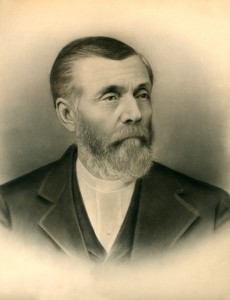 Mosiah Hancock was “one of the most stalwart Utah pioneers.” He was “intimately acquainted with Joseph Smith, Brigham Young, John Taylor, Orson Pratt, and many other of the Church’s earliest leaders,” and was ordained a Seventy in 1852. Three years later, Mosiah wrote,

“I was permitted by the power of God, to go into His presence and into my former abode. I saw the Eternal Father on His throne and His wives on his left side, all shining in glory; I saw the Savior and knew Him. It takes the power of the Holy Ghost to tell the difference between the Father and the Son, they look so much alike. Jesus said: ‘Mosiah, I have brought you here to show you how it was before you went to the earth.’”

Thus, Mosiah received a wealth of information about what is known in Mormonism as the pre-existence. His entire vision is interesting and worth the time to read, but here I will only mention a few of his pre-earth observations as recorded in Life Everlasting by Duane S. Crowther (Cedar Fort, 2007. Mosiah Hancock’s vision is found on pages 93-98).

Mosiah learned that God’s children “seemed to have been created mates.” That is, they were created each as a pair, consisting of one male and one female.

“[T]hey were arranged in classes of about two hundred; the males sitting in front and the females behind them. They were taught in the arts and sciences, and everything necessary to make the heart happy…I also saw Joseph, Brigham, and many others engaged in this work of education.”

In one account Mosiah specified that while there was instruction on such things as oratory, astronomy, trigonometry and the use of machinery, “the females were taught to weave, to knit, to sew and to work in everything in their departments.”

Much of Mosiah’s vision was about the War in Heaven and how it affected the spirits and their futures:

“I heard the question asked: ‘Who will go down and set an example of humility and faithfulness to these my children, that at they may be brought, through obedience to our laws, back into our presence?’

“…The plan of [Jesus] was accepted as being the only sure plan for an exaltation. The plan of [Lucifer] was rejected with great kindness; but [he] was not satisfied… Finally, Lucifer openly rebelled against the Father and the Son.

“We who were faithful to the Father and Son, had a white star upon us, and the others chose a red star; about one third of the males and females would not accept of either star, but withdrew from the conflict, the females taking the males by the arm, said, ‘Come, let us not take part with either side. Let us retire.’ …Satan and his followers were all cast down, their female companions wept, and we all wept.

“…the Great Eternal spoke again and said, ‘Hear, 0 ye my children’; His voice penetrating the immensity of space so that all could hear it, ‘It is decreed by the Great Eternal that the females shall not follow their males in their banishment, but for every male that has kept his first estate and fought valiantly for the Father and the Son, there are two females.’

“’Again it is decreed that those males who have taken no part in this great conflict shall keep their females and a race of servants shall thy be.’

“I then saw that the notable ones who had taken such an interest in the rights of the Father and the Son, were appointed to gather up those lone females whose companions had been cast down. They were again placed in classes, each man having two females in the ranks behind him. I there saw that they were again taught in their classes, which now contained about three hundred.”

In due time in Mosiah’s vision, Joseph Smith prepared to go to earth:

“…the voice of the Great Eternal said, ‘Oh, my neglected daughters, gather around these my faithful servants who have been faithful in teaching you the principles of righteousness, and of our kingdom, that others may come up and have the chance to be glorified.’ I saw many of them gather around Joseph and form a ring with him, and the Savior in the center. They made a covenant with him that they would meet him on the earth and help him establish that great work upon the earth. I saw many of them gather around Brigham Young, John Taylor, Wilford Woodruff and many other notable ones, and around many who have not become so notable. They formed rings around each of them, with Christ in the center each time, for He rehearsed to them the covenant. They would take each other by the hand, in the circle, and bow their faces down to Him in the center, and in the most solemn manner agree to meet them here, until every one of those neglected daughters was provided for…”

Duane Crowther suggests that these “neglected daughters” were females whose male “mates” had been banished following the War in Heaven, and that the “provision” for these female spirits “perhaps was a reference to the plural marriage which was practiced within the Church until 1890” (114).

But if so, what of the plural wives who were not provided for on earth because their husbands had responsibilities toward too many women? As Mormon author Todd Compton pointed out, “Polygamous wives often experienced what was essentially acute neglect” (In Sacred Loneliness, xiii).

And what of the women who were married to and living with other husbands when Joseph Smith made them his plural wives? Eleven of Joseph Smith’s wives were already being “provided for” by their legal husbands at the time they chose to also wed the man with whom they had apparently covenanted before coming to earth.

As confusing as parts of Mosiah Hancock’s vision may be, much of the information recorded by him was standard Mormonism in 1855. Orson Pratt was teaching that Heavenly Father had many wives (The Seer, 172). Latter-day Saints believed that Joseph Smith taught that those who were “neutral” in the “great conflict” would be black-skinned and cursed through denying them the priesthood (Sermons and Missionary Service of Melvin J. Ballard, 248). Brigham young taught that the black race would be “the ‘servant of servants’” (Journal of Discourses 7:290-291). Plural marriage was understood to be a divine mandate (Journal of Discourses 1:58ff).

Even though Mosiah Hancock’s vision passed a test of authenticity (it was not “contrary to the church covenants” D&C 28:12), we have to remember that it is not, and never has been, regarded as official. Yet it’s still interesting and informative to see what Mormons in 1855 believed God was telling them.

21 Responses to A Vision of Mormonism’s Premortality