Posted on February 2, 2006 by Sharon Lindbloom 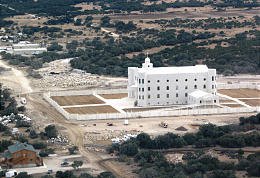 “On a dirt road just a few miles outside of the tiny town of Eldorado, the temple stands out amid the surrounding ranchland. It has a limestone facade. Arched windows around the building lead up to turrets, which surround the roof. Atop it all is a short-domed steeple, reminiscent of the Nauvoo, Ill., temple of The Church of Jesus Christ of Latter-day Saints.”

Above the doorway is the “all seeing eye” and an inscription that reportedly includes the phrase, “Holiness to the Lord in the House of the Lord.” 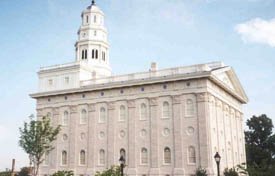 The story caught my attention because of the photo, because of how much the FLDS temple resembles LDS temples. (see Nauvoo LDS temple at left.)

“‘The temple, it’s magnificent from the outside,’ said JD Doyle, a local pilot who has documented the FLDS construction from the air.”

This is exactly what non-Mormons say about LDS temples, reported frequently in LDS newspapers and magazines.

A couple more things about the FLDS temple that sound similar to LDS temples:

“[Schleicher County, Texas, Sheriff David] Doran said he maintains contact with FLDS members on the YFZ [Yearning for Zion] Ranch, who told him members will flock from all over the United States to Texas as a retreat. ‘They said they’ll do their temple work and return home,’ he said. Asked what kind of temple work will be performed, Doran said he had no idea.”

“[Washington County Sheriff Kirk] Smith said he has tried to inquire about the temple among FLDS members in Hildale [Utah]. ‘They’re pretty close-mouthed about the whole thing,’ he said. ‘You certainly sense that it’s special to them, but they won’t talk about it.'”

I understand that the FLDS Church is not part of the LDS Church. Yet it seems a bit of a stretch to accept the official LDS statement found on lds.org:

“Polygamist groups in Utah, other parts of the American West and elsewhere have nothing whatsoever to do with The Church of Jesus Christ of Latter-day Saints.” (emphasis mine)