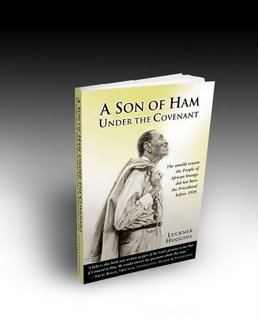 I read a press release today about a relatively new book which claims it is “Changing the World’s Concept Concerning the People of African Lineage and the Mormon Priesthood.” Son of Ham Under the Covenant is written by Latter-day Saint Luckner Huggins. According to the press release,

“Perhaps for the first time in the Church’s entire history, Luckner Huggins offers a positive response, based on scriptural evidences as to the real reasons the people of African lineage waited so long for Priesthood inclusion. Presented as a novel, this first book [in the series] explores the roots of voodoo in Haiti, the author’s birthplace. During his exploration he found the connection between voodoo and the exclusion of his African ancestors in Church’s Priesthood.”

Mr. Huggins states in the “Note to the Reader” at the opening of his book,

“…this book does not claim a prophetic revelation, in addition to what God has given in the Holy Scriptures or will provide in the future through His designated latter-day Prophets. Neither is it authorized to do so. I have not been coached by any churches’ ecclesiastical leaders…”

In a section of the book titled “Historical Background On Why This Book Was Written” Mr. Huggins writes,

“Is the question of black people in the Priesthood doomed to eternal speculations, or are there answers waiting to be discovered, like the hidden treasures of a precious mine? Do the Holy Scriptures have answers, and can [the fictional main character] Luke’s story in this book bring them out in the open?…

“In essence, all the civilizations of time have fallen because of wickedness. Why do the critics exclude the people of African lineage from the category of those who have fallen because of wickedness? …Rather than following the pattern of the critics, this book will unfold its own version of who the descendants of Ham really were after Noah’s Flood subsided, and why they became slaves during the dark-ages; as well as the reasons why they waited until 1978 to inherit the Priesthood that God entrusted into Noah’s hands for them…

“…this book will talk about a specific dark image that was hidden among the forefathers of the African lineage. It will unveil what really might have caused their offspring to be withheld from the Priesthood until 1978.”

It will unveil what “really might have” caused the curse? Despite Mr. Huggins’ disdain of speculation, it appears that he has freely engaged in it himself.

I have not read this book, so perhaps there’s something in it that would clear up my question; but I’m left wondering why Mr. Huggins has not considered the pronouncements of previous latter-day Prophets and Apostles regarding this issue. Consider these authoritative LDS teachings:

It’s clear that whatever caused the withholding of the Priesthood from people of African lineage, these LDS prophets and apostles taught that it happened in the pre-existence. Mr. Huggins apparently thinks otherwise if he’s suggesting a connection between his ancestors’ practice of voodoo and the curse against those with black skin. I wonder why Mr. Huggins is willing to leave room for God’s revelation through future LDS prophets but dismisses the declarations of past LDS prophets.

Sharon surrendered her life to the Lord Jesus Christ in 1979. Deeply passionate about Truth, Sharon loves serving as a full-time volunteer research associate with Mormonism Research Ministry. Sharon and her husband live in Minnesota.
View all posts by Sharon Lindbloom →
This entry was posted in Mormon History, Priesthood, Uncategorized and tagged Curse of Cain, Priesthood, Racism. Bookmark the permalink.