The Bible in Mormonism 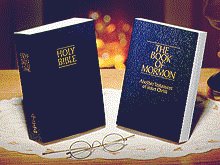 Continuing with my defense against accusations leveled at me by “Trevor,” today I want to blog a bit about the LDS view of the Bible. In my previous two posts I have explained Trevor’s accusations and dealt with what I perceived to be one of them. For this background, please see Searching for Salvation: The Bible or TV Guide? and After All We Can Do.

Trevor said I repeated “deliberate distortions about what Mormons believe” when I posted a comment to a news web site. He did not elaborate on what these distortions might be, so for today I will suppose that he was upset over this part of my comment:

“Killer” Kane made yet another bad choice when he decided to jettison the Bible in favor of the Book of Mormon…Seems that we humans are prone to dismiss or ignore what God has told us in His Word in favor of having our senses stimulated by something different, something new.”

I think Trevor’s main concern with my comment left at Willamette Week Online would be summed up in the above point number one. While this is also my opinion, it speaks more directly to the issue of what Mormons believe about the Bible and its place in the LDS canon of scripture.

My use of the word “jettison” was a bit of indulgent hyperbole, yet there is one definition of that word that fits; that definition is “reject.” While Mormons include the Bible in their four Standard Works (Bible, Book of Mormon, Doctrine and Covenants, and The Pearl of Great Price) and even place it first in the Quad (all four volumes bound together in one), in practice the Bible holds an inferior position. This is because Mormonism claims the Bible has been corrupted over time while the other Standard Works have been miraculously translated and preserved in perfection, and have been specifically written for our present day.

Take a look at some authoritative LDS statements on the topic.

“I told the brethren that the Book of Mormon was the most correct of any book on earth, and the keystone of our religion, and a man would get nearer to God by abiding by its precepts than by any other book.” (Prophet Joseph Smith, History of the Church, 4:461)

“…the Book of Mormon remains secure, unchanged and unchangeable, …But with the Bible it was not and is not so…it once was in the sole and exclusive care and custody of an abominable organization, founded by the devil himself, likened prophetically unto a great whore, whose great aim and purpose was to destroy the souls of men in the name of religion. In these hands it ceased to be the book it once was.” (Apostle Bruce R. McConkie, The Joseph Smith Translation: The Restoration of Plain and Precious Things, pages 12, 13)

“What shall we say then, concerning the Bible’s being a sufficient guide? Can we rely upon it in its present known corrupted state, as being a faithful record of God’s word? We all know that but a few of the inspired writings have descended to our times,…What few have come down to our day have been mutilated, changed, and corrupted, in such a shameful manner that no two manuscripts agree….Add all this imperfection to the uncertainty of the translation, and who, in his right mind, could, for one moment, suppose the Bible in its present form to be a perfect guide? Who knows that even one verse of the whole Bible has escaped pollution, so as to convey the same sense now that it did in the original?” (Apostle Orson Pratt, Divine Authenticity of the Book of Mormon, page 47)

“The Bible, as it has been transmitted over the centuries, has suffered the loss of many plain and precious parts. ‘We believe the Bible to be the word of God as far as it is translated correctly; we also believe the Book of Mormon to be the word of God’ (The Articles of Faith 1:8.) …the Lord has revealed clearly the doctrines of the gospel in these latter days. The most reliable way to measure the accuracy of any biblical passage is not by comparing different texts, but by comparison with the Book of Mormon and modern-day revelations.” (Letter from the LDS First Presidency: Ezra Taft Benson, Gordon B. Hinckley, Thomas S. Monson; dated May 22, 1992, printed in Church News, 6/20/1992)

“The Old Testament is the word of God, and even though translations have dimmed some of its meaning, and many ‘plain and precious parts’ have been deleted, it still is an inspired and miraculous guide to all who will read it. When augmented by modern scripture…it can direct us into the paths of eternal salvation.” (Apostle Bruce R. McConkie, quoted in Church News, 1/1/94, page 16)

“Guided by the Book of Mormon, Doctrine and Covenants, and the Spirit of the Lord, it is not difficult for one to discern the errors in the Bible.” (Apostle Joseph Fielding Smith [later the 10th President of the LDS Church], Doctrines of Salvation, 3:191)

“The Book of Mormon clears up the misconceptions about the gospel as presented in the Bible.” (Apostle L. Tom Perry, Church News, 11/8/2003, page 3)

“In my judgment there is no book on earth yet come to man as important as the book known as the Doctrine and Covenants, with all due respect to the Book of Mormon, and the Bible, and the Pearl of Great Price, which we say are our standards in doctrine. The book of Doctrine and Covenants to us stands in a peculiar position above them all.” (Apostle Joseph Fielding Smith [later the 10th President of the LDS Church], Doctrines of Salvation, 3:198)

“Not all truths are of equal value, nor are all scriptures of the same worth. What better way to nourish the spirit than to frequently feast from the book which the Prophet Joseph Smith said would get a man ‘nearer to God by abiding its precepts than by any other book'” (President Ezra Taft Benson, The Teachings of Ezra Taft Benson, page 60)

“The older I get and the closer contact I have with the President of the Church, the more I realize that the greatest of all scripture which we have in the world today is current scripture. What the mouthpiece of God says to his children is scripture. It is his word and his will and his law made manifest through scripture, and I love it more than all other.” (Apostle Henry D. Moyle, First Counselor to President David O. McKay, as quoted in Ensign, July 1973, page 18)

“God bless us to use all the scriptures, but in particular the instrument He designed to bring us to Christ—the Book of Mormon, the keystone of our religion—along with its companion volume, the capstone, the Doctrine and Covenants, the instrument to bring us to Christ’s kingdom, The Church of Jesus Christ of Latter-day Saints.” (President Ezra Taft Benson, The Teachings of Ezra Taft Benson, page 43)

So “Killer” Kane did not (as far as I know) physically “jettison” the Bible in favor of the Book of Mormon (i.e., throw it away). However, if he believed his LDS leaders—and there’s no reason to think he didn’t—he rejected much of God’s truth by subjugating the Bible to the Book of Mormon, the other Standard Works, and the teachings of latter-day prophets.

I stand by my original statement. “Killer” Kane made a bad choice—as does anyone who rejects God’s steadfast Word:

“…for you have been born again not of seed which is perishable but imperishable, that is, through the living and abiding word of God…The grass withers, and the flower falls off, but the word of the Lord abides forever.” (1 Peter 1:23-24)

2 Responses to The Bible in Mormonism