Yesterday’s Deseret News carried a very sad and sobering report: “Deadly taboo: Youth suicide an epidemic that many in Utah prefer to ignore.” The report relates the tragic stories of several Utah teens who have taken their own lives in recent months and talks in depth about the widespread problem of youth suicide in Utah. 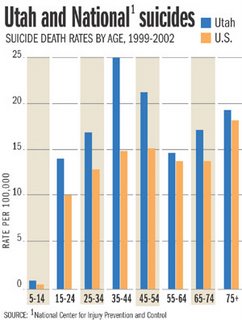 “A former surgeon general who recently spoke in Utah about suicide prevention said he was impressed with the state’s warm and friendly people, said Ken Tuttle, director of psychiatry at Utah Valley Regional Medical Center.

“But he added, ‘In New York, we kill each other. In Utah, you kill yourselves.'”

But not only in Utah. The article notes that the whole group of Rocky Mountain states has an unexplainable 30 percent higher rate of suicide than the rest of the U.S.

Citing statistics, Deseret News says one in six Utah students have seriously considered suicide in the last 12 months, and one in eight have actually made a specific plan to commit suicide in the same time period. Two percent of Utah youth “attempt suicide in a manner that requires medical attention.” Obviously, this is a serious problem. However,

“Suicide is clearly a taboo subject. And to talk about youth suicide is to wade into the complicated, mysterious arena of mental health and the delicate world of teenage emotion.

“This is a place few want to go.

“No one wants to venture into the dark realms where Utah young people — with the possibility and potential they represent — meet despair and self-destruction. Virtually no one wants to explore factors that contribute to a teenager’s private decision to end his life with a gun, pills, carbon monoxide or a rope.”

Utah Attorney General Mark Shurtleff gave his opinion on this issue when he said,

“We have this ‘All is well in Zion’ kind of thing going here. We’d rather not talk about it at all or maybe to go talk to the bishop about it. If there really is a mental health issue you need help. It doesn’t work to talk to the youth leaders or ecclesiastic leaders.”

Indeed. I did a search of LDS Church magazines and curriculum for the past 10 years. I searched for the word “suicide” in General Conference reports, First Presidency messages, general women’s meetings, Visiting Teaching messages, and the words of all General Authorities and found no discussion of the topic whatsoever. I found only three instances where the word “suicide” was even mentioned, and all three were in passing, in talks on other subjects. It’s amazing to me that the leadership of the Mormon Church does not provide help and hope for those suffering from pain related to suicide. No wonder it’s thought to be a taboo subject that must be borne alone.

In a study done by several doctors associated with the University of Utah School of Medicine, officials examined the suicide deaths of 49 Utah young people, conducting 270 hours of interviews with parents and other survivors:

“The study made clear the role society’s attitude plays in this problem and concluded those who died faced the following barriers for adequate mental health care:

“The study concluded, ‘It is suggested that the stigma of mental illness is a considerable barrier to mental health treatment.’

Of course I realize that mental illness must overcome stigmas everywhere, not just in Utah. Yet in a state where well over half the population share a common and dedicated faith and pride themselves on the extraordinary way they care for one another, the hopelessness of Utah teens as they suffer in silence is hard to understand.

Friends, those of you who are Christians, please pray for the children in Utah. Deseret News reports:

“And today, in the warming days of April, Utahns should have particular reason for concern:

“According to therapists and research, suicide rates are highest in the spring. As child psychiatrist Karen Black says: ‘We are headed into the manic season.'”

Sharon surrendered her life to the Lord Jesus Christ in 1979. Deeply passionate about Truth, Sharon loves serving as a full-time volunteer research associate with Mormonism Research Ministry. Sharon and her husband live in Minnesota.
View all posts by Sharon Lindbloom →
This entry was posted in Mormon Culture and tagged Suicide. Bookmark the permalink.