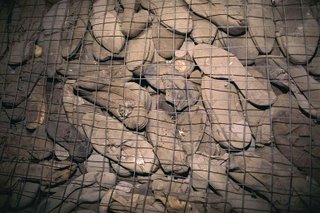 It started in 1995. Jewish leaders met with LDS Church representatives in an effort to find a solution to the concern Jews had over posthumous proxy Mormon baptisms of Jewish Holocaust victims. The two groups signed an agreement aimed at preventing the names of Holocaust victims from being added to the Church’s genealogical index and limiting any Jewish names in the index to those who were direct ancestors of living LDS Church members. The Church also agreed to remove any existing Jewish names in the index of which they were made aware.

In 2002 Jewish and LDS Church leaders reaffirmed the agreement reached in 1995.

In December 2003 concerned Jews told the press that the LDS Church was not honoring the 1995 agreement while Mormon officials claimed they remained in full compliance with the agreement.

The following April (2004) concerned Jewish leaders asked Senator Hilary Clinton to intervene in order to get the LDS Church to abide by the previous agreement. She met with LDS Senator Orin Hatch but Senator Clinton declined to comment on what was discussed at the private meeting. The LDS Church had no comment regarding the renewed accusations.

One year later, April 2005, Jewish leaders again met with LDS Church representatives. Saying the Church had broken its 10-year-old agreement to refrain from performing proxy baptisms of Jewish Holocaust victims, Jewish representatives again asked the Church to honor its 1995 agreement. The Church said it had always kept its part of the agreement; nevertheless, the two groups reaffirmed the existing pact.

Fast-forward another year to May 2006. The Jerusalem Post reports:

Jewish leaders in a dispute with the Church of Jesus Christ of Latter-Day Saints over the practice of posthumous baptisms say there is new evidence that names of Jewish Holocaust victims continue to show up in the church’s vast genealogical database.

“We’ve been dealing with it for 11 years, since 1995, and we continue to deal with it,” said Ernest Michel, a Holocaust survivor and founding member of the American Gathering of Jewish Holocaust Survivors.

…A cross-referencing of more than 1,500 Dutch Jews whose names should have been deleted from the church’s International Genealogical Index remain in the database, Michel said.

Over the past three months, the entries were matched by Salt Lake City researcher Helen Radkey against a 1995 list of deleted names provided by church leaders to Michel’s organization.

This is a complicated issue, to be sure. The LDS Church maintains 400,000,000 names in their International Genealogical Index, a list continually growing, added to by millions of LDS members. A few thousand inappropriate Jewish names must seem insignificant to the Mormon Church. Yet is it right for the Church to sign an agreement that they cannot or will not honor?

Mormon President Gordon B. Hinckley told the Associated Press that baptism for the dead is only an offer of LDS Church membership–which deceased individuals are free to reject. “So there’s no injury done to anybody,” President Hinckley said.

This lack of sensitivity amazes me. I understand that baptism for the dead is viewed by Mormons as an act of love, done in order to provide everyone with a chance to attain a better level of glory in the afterlife. This is why I say it’s a complicated issue. But setting aside whether or not Mormons should continue to baptize Holocaust victims despite objections from the Jewish community, the statement that there is “no injury done to anybody” seems a rather cold defense.

“As far as Judaism is concerned, [baptism of the dead] is theologically irrelevant, but emotionally it is quite distressful because it is viewed by many of us as a sign of disrespect.”

“It’s ridiculous for people to pretend they have the key to heaven. And even if they say they want to do somebody a favor … it’s not a symbol of love. It’s a symbol of arrogance.”

I’m sure Mormons would disagree with the Jewish position expressed by these men; yet it would be a good thing for Mormons to try to understand the issue from the Jewish perspective.

Perhaps Mormons could consider this scenario. A powerful and influential group has begun collecting the names of Mormon pioneers and martyrs. They are compiling them into a database which is accessible to researchers worldwide and will likely continue to be accessible for hundreds of years. This database includes records for each Mormon who has given his or her life, or sacrificed in another significant way, in consequence of their determination to remain faithful to the Mormon Gospel. Attached to each name is a letter of resignation from LDS Church membership, sent by proxy to Church headquarters in Salt Lake City.

Though the letters are written and sent only to provide these departed ones the opportunity to leave Mormonism and join another church if they so wish, do LDS descendants of these Mormon pioneers merely shrug off their ancestors’ proxy resignations without another thought? Are Mormons not concerned about what future researchers may find and mistakenly believe about these LDS heroes?

I suspect Latter-day Saints would be very upset over Mormon pioneer proxy resignations from the LDS Church. They may even believe it to be an injustice to the memories of their loved-ones which, of course, is a devastating injury to everybody concerned.

Sharon surrendered her life to the Lord Jesus Christ in 1979. Deeply passionate about Truth, Sharon loves serving as a full-time volunteer research associate with Mormonism Research Ministry. Sharon and her husband live in Minnesota.
View all posts by Sharon Lindbloom →
This entry was posted in Baptism for the Dead and tagged Baptism for the Dead, Jews. Bookmark the permalink.