Fair above all virgins

In the recently released movie titled, The Nativity Story, viewers are given a glimpse at what life was probably like for Mary and Joseph after it was learned that the espoused Mary is pregnant. Though I’ve heard pastors and theologians discuss the social ramifications of such a predicament, I can’t recall any film that does so. Since the Christmas story is recounted in only a minimal amount of New Testament paragraphs, some artistic license naturally comes into play; but the film does utilize quite a bit of scripture and there is no doubt that the Christ-child is “God made into flesh.”Peggy Fletcher Stack offers some interesting insight on the LDS view of the mother of Jesus in her recent piece in the Salt Lake Tribune titled “Something about Mary.” She notes that,

“Mormons will drag Mary out of the shadows of their faith again this season and plop her into the annual Nativity scene,”

but for most of the year, she says,

“Mary is largely tucked away — respected for her submissiveness, admired for her faithfulness, but largely invisible.”

Stack goes on to explain,

They do, however, believe she was a virgin when she conceived Jesus in her womb. The Book of Mormon, which Latter-day Saints believe was written some 600 years before Jesus’ birth, predicts the Messiah will be born in Jerusalem of a “precious and chosen vessel.” She would be “the most beautiful and fair above all other virgins,” the LDS scripture says.

Most Mormons choose to stop there. However, Stack goes on to say,

But Mormons also believe that God has a body and that Jesus was his literal son. Early LDS leaders including Brigham Young speculated that Jesus was created in much the same way as every other child — in the marriage bed. But only one partner was human.

Now, we are told that Jesus Christ is the only begotten Son of God in the flesh. Well, now for the benefit of the older ones, how are children begotten? I answer just as Jesus Christ was begotten of his father. The difference between Jesus Christ and other men is this: Our fathers in the flesh are mortal men, who are subject unto death: but the Father of Jesus Christ in the flesh is the God of Heaven. (Family Home Evening Manual, 1972, 125) 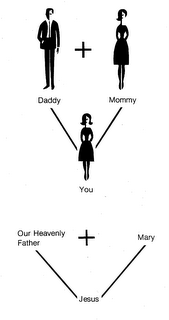 The same manual carried the above illustration showing the figure of a man, woman, and child. On page 126 LDS parents are told they should use this to explain to their children “how Jesus was the only begotten Son of God.” Daddy plus Mommy equals you; Heavenly Father plus Mary equals Jesus.

The above comments raise an interesting question, “How can a Mormon reconcile the notion that Mary “was a virgin when she conceived in her womb,” and also believe LDS leaders who taught that Jesus “was created in much the same way as every other child — in the marriage bed.” Certainly these statements are mutually exclusive.

Mormon Apostle Bruce McConkie obviously felt he had the solution when he wrote:

For our present purposes, suffice it to say that our Lord was born of a virgin, which is fitting and proper, and also natural, since the Father of the Child was an immortal Being. (The Promised Messiah, 466)

Traditionally, the definition of a virgin is a person who has never had sexual intercourse, and this is the definition historically held by Christians when it comes to Mary’s conception. However, in order to defend the teachings of LDS leaders, McConkie is compelled to redefine this term. I find such an explanation to be very disturbing. I can only hope that Mormons are equally disturbed.

30 Responses to Fair above all virgins