Posted on September 10, 2007 by Sharon Lindbloom 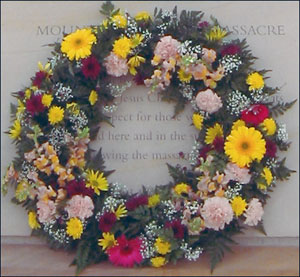 A significant date in the history of our nation. A date marking tragedy in the history of many families. A day of mourning 150 years ago. A day of sorrowful remembrance in 2007. The Mountain Meadows Massacre is not pleasant to recall, but it should not be forgotten. There are lessons for all of us buried in the horror.

“While critics sometimes place broad-brush blame upon Mormonism for the 1857 Mountain Meadows Massacre, the causes are more complex — and more characteristic of the human condition — than merely being attributable to one’s religious faith.

“Richard E. Turley Jr., managing director of the [LDS] Family and Church History Department, reflected in his FAIR Conference presentation on the setting and causes of the tragedy in which Mormon settlers in southern Utah killed some 120 California-bound emigrants, including women and children…

“‘What we have discovered,’ he said, ‘is that the … massacre is a classic case of mass killing as described by experts who have studied group violence in modern world history.'”

It comes as no surprise that sociologists are able to recognize “conditions and characteristics that contribute to genocide and mass killing.” Of course there was a reason (or reasons) otherwise normal, family-oriented Mormon men murdered seventy adult emigrants and fifty innocent children.

I agree that the “causes are … complex.” Yet I don’t know if it’s really possible to completely separate “the human condition” from “one’s religious faith.” For the point of one’s religious faith, at least in Christianity and Mormonism, is to address the human condition. In Christianity, it is to bring about reconciliation between sinful man and a holy God. In Mormonism, it is to eradicate sin and the desire to sin, to make oneself worthy of Godhood.

Both belief systems agree that humans are sinful. The massacre at Mountain Meadows illustrates the depth of depravity in “the human condition.”

“Sin is an unpopular subject, and Christians are often criticized for harping on it too much. But it is only because Christians are realists that they do so. Sin is not a convenient invention of parsons to keep them in their job; it is a fact of human experience.

“The history of the last hundred years or so has convinced many people that the problem of evil is located in man himself, not merely in his society. In the nineteenth century a liberal optimism flourished. It was then widely believed that human nature was fundamentally good, that evil was largely caused by ignorance and bad housing, and that education and social reform would enable men to live together in happiness and goodwill. But this illusion has been shattered by the hard facts of history.” (Basic Christianity, 61-62)

In the southern Utah militia of 1857 were found Latter-day Saints who today would be heralded as Mormon champions. These men had sacrificed much for their faith. They gave their all to follow their prophet into the wilderness, and, through obedience, they served their God faithfully. They lived their religion, they did their best to keep their covenants. Nevertheless, their deceitful and desperately wicked hearts (Jeremiah 17:9) got the best of them. This is not finger-pointing, for I know that there but for the grace of God go I. Therein lies the true unity of humankind: our universal sinfulness.

The Lord looks down from heaven on the children of man,
to see if there are any who understand,
who seek after God.

They have all turned aside; together they have become corrupt;
there is none who does good,
not even one. (Psalm 14:2-3)

“This exposure of our sin has only one purpose. It is to convince us of our need of Jesus Christ, and to prepare us for an understanding and acceptance of what he offers. Faith is born of need. We shall never put our trust in Christ until we have first despaired of ourselves. He said himself, ‘Those who are well have no need of a physician, but those who are sick; I came not to call the righteous, but sinners.’…

“Christianity is a rescue religion. It declares that God has taken the initiative in Jesus Christ to deliver us from our sins. This is the main theme of the Bible…

“Through Jesus Christ the Saviour we can be brought out of exile and reconciled to God; we can be born again, receive a new nature and be set free from our moral bondage; we can have the old discords replaced by a fellowship of love.” (80-81)

The Mountain Meadows Massacre was a demonstration of unchecked evil in the hearts of men. Try as they might, those stalwart Latter-day Saints could not rescue themselves. They could not create within themselves a new nature that would set them free from moral bondage. They couldn’t do it, even as they counted on Christ to make up the difference “after all they could do.” The only hope — for them and for us — is to throw ourselves at the feet of the Savior and plead for His mercy.

Therefore, if anyone is in Christ, he is a new creation. The old has passed away; behold, the new has come. All this is from God, who through Christ reconciled us to Himself and gave us the ministry of reconciliation; that is, in Christ God was reconciling the world to Himself, not counting their trespasses against them…” (2 Corinthians 5:17-19)

The “human condition” is an ugly thing that unfailingly leads to death. Therefore,

“We implore you on behalf of Christ, be reconciled to God. For our sake He made Him to be sin who knew no sin, so that in Him we might become the righteousness of God.” (2 Corinthians 5:20-21)

Sharon surrendered her life to the Lord Jesus Christ in 1979. Deeply passionate about Truth, Sharon loves serving as a full-time volunteer research associate with Mormonism Research Ministry. Sharon and her husband live in Minnesota.
View all posts by Sharon Lindbloom →
This entry was posted in Jesus Christ, Mormon History, Nature of Man, Salvation. Bookmark the permalink.