Posted on January 9, 2008 by Sharon Lindbloom 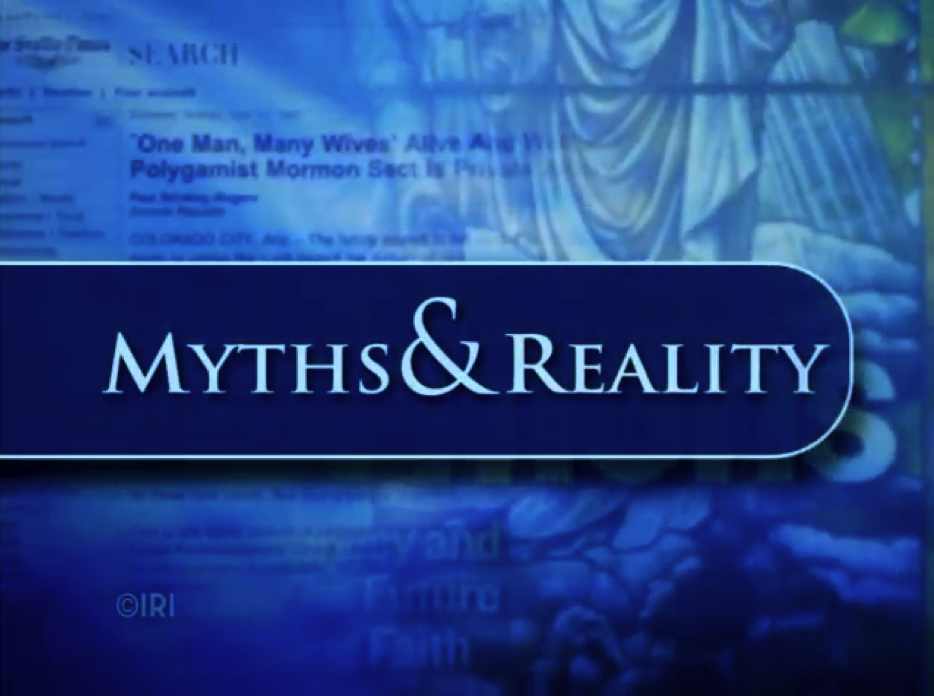 The LDS Church has posted a 10 minute video on it’s web site titled, “Myths & Reality.” Originally produced to answer common questions from journalists during the 2002 Olympics, the video has been updated and is now available to the public.

“Myths & Reality” opens with a minute and a half of man-on-the-street clips of people stating what they “know” about Mormons. Most of the statements are incorrect; the video subsequently seeks to dispel three of the “misunderstandings” raised. The spokesman, Steve Young, explains,

“In the next few minutes we want to show you some things we hope will dispel some myths about us, because the myths are still out there, alive and well.”

The first myth addressed is “Mormons Practice Polygamy.” The video spends 50 seconds on this topic, stating that Mormons discontinued the practice of polygamy over 100 years ago. Steve Young then explains that Mormons are “bothered” when Fundamentalist Mormons are called “Mormons” because these people are not Mormons. Gordon B. Hinckley “state[s] categorically that this church has nothing whatsoever to do with those practicing polygamy,” and the video moves on.

Myth number 2 is “Mormons Care Only For Their Own.” The video deals with this by spending 1 minute and 55 seconds highlighting the LDS Church’s laudable humanitarian efforts worldwide.

The final myth addressed is “Myth #3: Mormons Are Not Christian.” This topic is apparently considered the most important of the three; more time is given for this issue than the other two myths combined: about 3 minutes and 50 seconds.

The spokesperson during this segment is Sharlene Hawkes, a former Miss America. She says that it’s hard for Mormons to understand this myth because “We are Christian to our core.” Ms. Hawkes suggests one reason people might think Mormons are not Christian is because of the nickname “Mormon.” Mormons prefer that the full (correct) name of the Church be used because “it includes the name of the Savior” and that’s important to Mormons.

Ms. Hawkes tells viewers that Mormons love the Bible and try to follow the example of Jesus Christ, but that they are “different from other Christian faiths in important ways.” Ms. Hawkes talks about these important differences, including the Book of Mormon (a “companion to the Bible”), the belief in modern prophets and continuing revelation, the commitment to temple-building, the LDS Church as a restoration of the ancient church, the large missionary force, the focus on families, the work of compiling genealogies and how “even those who have passed on can be linked to us in an eternal family chain.” The video then concludes with Gordon B. Hinckley extolling Christ.

We can’t really expect much more than this in a 10 minute video. Still, it doesn’t seem to me that many bona fide myths were dispelled. In fairness, the LDS web site says these are the questions journalists were raising in 2002, but it also says the video “has been updated and posted on Newsroom today to help counter persistent myths about the Church.”

Are these really the questions people are asking today — the “misperceptions” they struggle with? How could anyone in America today who watches television or reads the newspaper think Mormons still practice polygamy? Are people really hung up on the misperception that Mormons aren’t actively engaged in humanitarian relief? In fact, the man-on-the-street which initially raised the issue spoke in glowing terms of how Mormons care for one another, not criticizing that they don’t care for others. Could this be a straw-man myth?

I do think “Myth #3” is a current and persistent question coming from those outside of Mormonism. But the video did next to nothing to address the question and inform people in a meaningful way.

Journalists today clearly know and promote every “reality” contained in this video. The LDS Church’s Public Relations department has publicized all of these things many times over. I wonder if it has ever occurred to the LDS Church that perhaps the things they call “misperceptions” persist because they never adequately answer the questions.

Surely there is a better way, even in under 4 minutes, to clarify the charge, “Mormons Are Not Christian.” Maybe they could have done something like this:

“This is a complex issue and not easily explained in a short video. We believe we are — and define ourselves as — Christian. In fact, we believe that The Church of Jesus Christ of Latter-day Saints is the truest form of Christianity on earth today and that Mormons are better than any others at following the teachings of Christ. Though we share some things with other Christian churches, Mormonism is different and unique in important ways. The foundational differences that cause some to claim Mormons aren’t Christian are found in the way we define the nature of God, the nature of Christ, and the content of the Gospel. Mormons differ significantly from traditional Christians in each of these areas — and others. Our Prophet has explained that we worship a different Christ than the Christ worshiped in traditional Christianity. Some people believe this strips Mormons of the title ‘Christian’; we disagree. We are Christian to our core. That is, we accept our Jesus Christ as the Son of God and the Redeemer of the world; differences in theology — who or what God is, and who Christ is — don’t affect that.”

What are your ideas for a myth-buster reality-promoting video segment discussing “Mormons Are Not Christian”?

Sharon surrendered her life to the Lord Jesus Christ in 1979. Deeply passionate about Truth, Sharon loves serving as a full-time volunteer research associate with Mormonism Research Ministry. Sharon and her husband live in Minnesota.
View all posts by Sharon Lindbloom →
This entry was posted in Misconceptions. Bookmark the permalink.

53 Responses to Myths Be Gone