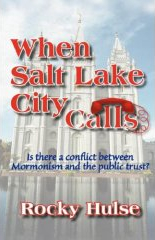 I just finished reading When Salt Lake City Calls by Rocky Hulse. Published late in 2007, the book addresses the question, “Is there a conflict between Mormonism and the public trust?”

Mr. Hulse was born and raised a 6th generation Mormon. He remained in the LDS Church until he came to saving faith in Christ in 1986. Mr. Hulse and his wife, Helen, are the directors of the Nauvoo Christian Visitors Center in Nauvoo, Illinois.

When Salt Lake City Calls offers a logical progression of thought as it explores LDS doctrines and history which are pertinent to the question,

“Could a Mormon who holds a Governmental position of authority, whether elected or appointed, be forced by their religious beliefs, to make a decision contrary to all logic, reason, facts or evidence because their Prophet has directed the request?” (Back cover)

After a thorough examination of the LDS Priesthood, the LDS concept of the Kingdom of God coupled with politics, the LDS doctrines regarding Prophets, the LDS-mandated covenants and endowments, and a look at how these Mormon teachings have played out in history, the book’s conclusion says this:

Our Republic form of government was originally drawn up by the Founding Fathers to place representatives in Congress that would be independent and unencumbered. A Mormon, by definition of their own doctrine, having been placed in a multiple covenanted relationship with their Church, is not independent or unencumbered. Mormonism not only functions by oath, it is conditioned by rote and ritual and all Mormons are bound by obligation to its Priesthood authorities.” (304)

When Salt Lake City Calls continues on to quote a relevant passage from John F. Kennedy’s famed speech which highlights a big difference between the issues related to JFK’s presidential bid and that of a Mormon:

“I want a chief executive whose public acts are responsible to all and obligated to none — who can attend any ceremony, service or dinner his office may appropriately require him to fulfill — and whose fulfillment of his Presidential office is not limited or conditioned by any religious oath, ritual or obligation.” (304)

John Kennedy was the sort of chief executive outlined in that speech; but, as propounded in When Salt Lake City Calls, an active and fully committed Latter-day Saint could not match those qualifications. A Latter-day Saint is under obligation, via oath and ritual, to obey their Church leaders at all levels:

“WAKE UP, YE ELDERS OF ISRAEL, AND LIVE TO GOD and none else; and learn to do as you are told….But if you are told by your leader to do a thing, do it. None of your business whether it is right or wrong.” (305, quoting President Heber C. Kimball, Journal of Discourses 6:32)

Heavily weighted with lengthy quotes from LDS authorities and manuals, When Salt Lake City Calls is fully documented, resulting in arguments that are quite compelling.

One Response to When Salt Lake City Calls