The Reason We Take Exception

“What goes around comes around.” So said the Karate Kid. 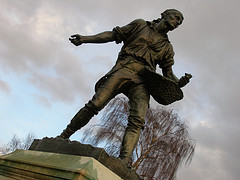 A similar thought is found in Galatians 6:7: “Whatever one sows, that will he also reap,” Hosea 8:7: “They sow the wind and they shall reap the whirlwind,” and in the words of Jesus: “…the measure you give will be the measure you get” (Matthew 7:2).

All of this has been on my mind as I observe the discomfort of Latter-day Saints over the lately oft-published phrase, “Fundamentalist Mormon.”

Last week (April 17, 2008) the LDS Church posted a video of Apostle Quentin L. Cook making an appeal to the news media to stop using the word “Mormon” in connection with people who practice polygamy. Otherwise, Mr. Cook complained, “It creates a lot of confusion.”

Several times during the video Mr. Cook stressed that the main problem with this confusion is that it does not allow people to understand and make the “significant distinction” between polygamous Latter Day Saints and monogamous Latter-day Saints. He said,

“I would like to make an appeal to [the media] on behalf of the Church to clearly make that distinction, to not include ‘Mormon’ with the word ‘polygamist,’ to not identify The Church of Jesus Christ of Latter-day Saints, the Mormon Church, with polygamy. They’re entirely separate. And it would make it so that everybody understood the situation better if they ceased doing that. And we would appreciate it.”

Mr. Cook provided an example of confusing reporting, reading the lead from an article in an Australian newspaper:

“Childhood within a Fundamentalist Mormon community means little education, regular beatings, rigorously enforced household duties, and for girls, arranged marriage in their teens culminating in a lifetime of subservience.”

To which Mr. Cook remarked, “Nothing could be further from the truth with respect to the members of the Church.” He then proceeded to make distinctions between the FLDS and LDS communities, point by point. In addition to not practicing polygamy, Mormons:

“That’s the reason we take exception to this kind of writing,” Mr. Cook said.

I think Mr. Cook makes valid points. He makes a very similar argument to that which Christians have made for many years regarding the insistence of the LDS Church and its members that Mormonism be identified as “Christian.”

To call Mormonism “Christian” creates a lot of confusion. This confusion does not allow people to understand and make the significant distinction between polytheistic Mormonism and monotheistic Christianity. For example, juxtaposed against LDS teachings, Christians:

In Mormonism it is written,

“God is an exalted man who once lived on an earth and underwent experiences of mortality. …The progression of our Father in heaven to godhood, or exaltation, was strictly in accordance with eternal principles,…

“By definition, exaltation includes the ability to procreate the family unit throughout eternity. This our Father in heaven has power to do. His marriage partner is our mother in heaven…

“We were born in the premortal life as spirit beings, sons and daughters of a glorified, perfected, exalted being. This holy being himself lives in the family unit. …We are the literal offspring of the most glorious personage of whom it is possible to conceive. He is God Almighty, our Heavenly Father…

“Men Are Gods in Embryo…Man is the child of God,… so the undeveloped offspring of celestial parentage is capable, by experience through ages of aeons, of evolving into a God.

“This Potential Was Transmitted to Us Through Our Spiritual Birth…

“…you have got to learn how to be Gods yourselves, and to be kings and priests to God, the same as all Gods have done before you,…” (Achieving a Celestial Marriage Student Manual. 129-130)

Nothing could be further from the truth with respect to members of the Christian church. Mormonism is not Christianity and Christianity is not Mormonism. They are entirely separate. If the LDS Church (and others) would stop using the word “Christian” in connection with those who practice polytheism (defined as “belief in or worship of more than one God), it would make it so that everybody understood the situation better.

And we would appreciate it.

14 Responses to The Reason We Take Exception