American Idol’s 2008 finalist David Archuleta has a beautiful voice and a compelling way of phrasing his songs. A seventeen-year-old Mormon from Murray, Utah, his hometown and Church are very proud of him. 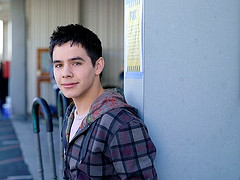 Who is Jesus to David Archuleta? According to the web site of David’s church, The Church of Jesus Christ of Latter-day Saints, the Mormon understanding of Jesus “is significantly different from that of traditional Christianity.” So different, in fact, that the last Prophet and President of the LDS Church said Mormons don’t believe in the traditional Christ (Gordon B. Hinckley, LDS Church News, week ending June 20, 1998, p.7). Another leader in the LDS Church taught that Mormons worship a different Jesus than other Christians (LDS Seventy Bernard P. Brockbank, Ensign, May 1977, p.26). And an apostle of the Mormon Church even went so far as to say that all non-Mormon Christendom have “debased themselves before the mythical throne of a mythical Christ” (Bruce R. McConkie, Mormon Doctrine, p. 269).

So who is this Jesus that Mormons believe in? How is he different from the Jesus revealed in the Bible and worshipped by traditional Christians since Christ walked the earth 2000 years ago?

Traditional Christian theology states Jesus is the Creator of all things “in heaven and on earth, visible and invisible, whether thrones or dominions or rulers or authorities—all things were created through Him and for Him” (Colossians 1:16). Mormonism states that Jesus created many things, but not all things. He did not create Lucifer, for instance, who is identified in the Bible as the “power” we wrestle against in our spiritual battles (see Ephesians 6:10-12). In fact, according to Mormonism, Jesus is the spirit brother of Lucifer (Milton R. Hunter, The Gospel Through the Ages, p. 15; Bruce R. McConkie, Mormon Doctrine, p. 192).

In traditional Christian theology, Jesus is God and has always been God: “In the beginning was the Word, and the Word was with God, and the Word was God. He was in the beginning with God” (John 1:1-2). According to Mormonism, Jesus was procreated by Heavenly Father and Heavenly Mother, born to them as a spirit son, and later achieved His Godhood by obedience to “all the Gospel truths and universal laws” (Gospel Principles, p. 11; The Gospel Through the Ages, p. 51).

These are just a few of the many differences that could be cited, but these are enough to demonstrate that the differences between the traditional Christ and the Mormon Christ are indeed very significant.

One Door to Salvation
Who is the “Living Christ” of Mormonism?
Latter-day Prophets Speak