Last Saturday—the Shabbat, as Jewish believers call it—my friend and I attended a conservative Jewish synagogue service. The Jews believe in meeting all morning long, so from 9:15 until noon, they read from the Torah, prayed Hebrew prayers, and even meditated on Psalm 150. (“Why don’t we use musical instruments in our service?” the rabbi asked. “Because if the string on our instrument broke, we might be tempted to fix it and thus break the Sabbath.”) 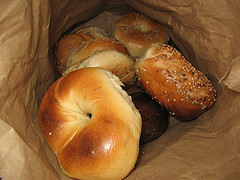 Afterwards, we ate lunch with the congregation, actually consuming the stereotypical bagels and lox along with herring and tuna. Then, thanks to our decade-long relationship with the rabbi, we were invited at 1 p.m. to share Christianity with about 50 Jewish believers. After about 35 minutes of a prepared talk where we were very transparent, we opened the floor for questions.

What followed was what I would have expected in a Mormon ward. In fact, there was one instance where I—no kidding—had to literally remind myself that we were answering Jews and not Mormons. Here were just some of their many questions:

There were three or four Holocaust survivors in the audience, and they pointed out the sin of anti-Semitism, even referring to times when they personally had been called “Christ-killers.” Humbly, we read from the recent WEA declaration (“The Gospel and the Jewish People: An Evangelical Statement”) that begins, “We sadly acknowledge that church history has been marred with anti-Semitic words and deeds and that at times when the Jewish people were in great peril, the church did far less than it should have.” And, yes, we must admit that some throughout history have also unfairly treated or attacked the Mormon people.

When the scheduled one-hour talk stretched into an hour and a half, the rabbi finally closed the meeting. Much to our surprise, we did not receive any negative reaction afterward, and a dozen folks waited patiently to talk to us individually. I was able to hand out eight The Case for Christ books (Lee Strobel), while three or four others told me that their friends had already given them copies! (Christian, you’re doing your job!) One elderly Jewish man even asked the rabbi if we could return for further discussion—wow!

But the biggest smile of the day came when a septuagenarian gentleman put his hand on my shoulder and quietly asked, “Do you know how you are a success with our group? You watch how many fall asleep. I always say you are successful with only 10 percent who fall asleep. But nobody fell asleep today!” Those who don’t understand Christianity might disagree with us, but many want to hear what we have to say, even if they don’t agree. And if we don’t have answers to these very fair questions, then we are not doing what 1 Peter 3:15-16 commands us to do.

To every man an answer.

This entry was posted in Christianity. Bookmark the permalink.