My Bishop Made Me Do It

On 9 June 2008 Fox News carried an Associated Press story from Hawaii. It seems that three men from Oahu have been charged with stealing rocks from a protected Maui beach, to be used in an underground cooking pit at their church – The Church of Jesus Christ of Latter-day Saints. 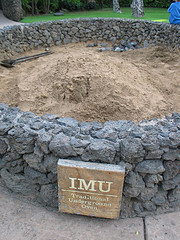 I don’t mean to make light of environmental conservation issues, but the crime seems pretty minor in the grand scheme of things. Nevertheless, it’s interesting to read the unfolding story.

Initially, one of the men, Charlie Bright, told the state Department of Land and Natural Resources that he bought the rocks. However, Mr. Bright would not identify the seller.

Later Mr. Bright told reporters that he had a letter granting permission from the landowner for the men to take the rocks. Mr. Bright was unwilling to identify the landowner, but indicated that the name would be provided at the subsequent hearing.

Later still Mr. Bright called state officials confessing that the three men had taken the rocks, but he said they did not know it was illegal.

The men had allegedly loaded 943 coconut-sized river rocks into pickup trucks, planning to take them to their LDS ward on another island via the interisland ferry. One of the accused men, Ralph Chun, is the Kahaluu Ward bishop. Mr. Bright explained the incident:

“‘We do this for the Mormon church. Our bishop told us to come to Maui to get imu rocks because ours is old already, about 10 to 12 years old,’ Bright said, according to the report. ‘We use the rocks to cook kalua pig for the Boy Scouts to support them through our fundraisers. It was for a good cause.'”

Like I said, the “crime” was pretty insignificant, and it was most likely done in ignorance. The courts will decide whether to grant the men mercy and declare them innocent, or whether they are guilty and required to pay a fine.

While we might chuckle over the lighter side of this story, there is a more serious lesson to take away from it. I think about Mr. Bright getting caught, as it were, with his hand in the cookie jar. He offers several excuses, hoping he’ll hit on one that will get him off the hook. He begins by trying to make the crime appear to be no crime at all. Then he pleads ignorance. Finally he tries to blame someone else and finishes with an appeal to the idea that the end justifies the means.

This reminds me of the scene in the Garden of Eden. Adam and Eve disobeyed God and ate the forbidden fruit. When God confronted them Adam said, “The woman whom you gave to be with me, she gave me fruit of the tree, and I ate.” Then God said to Eve, “What is this that you have done?” Eve said, “The serpent deceived me, and I ate.” And why did they eat? Though they knew it was wrong, they thought the end would justify the means: “So when the woman saw that the tree was good for food, and that it was a delight to the eyes, and that the tree was to be desired to make one wise, she took of its fruit and ate, and she also gave some to her husband who was with her, and he ate” (Genesis 3:1-13).

It’s human nature to make excuses for our sin. Like Adam and Eve — and like Mr. Bright as well – we try to divert attention away from our transgressions. But when we stand before the Holy and Just God, no excuse will do. Each one of us is guilty, plain and simple. Each one of us deserves condemnation for our sins (Romans 3). Just as the apostle Paul wrote, every one of us may cry out, “Wretched [person] that I am! Who will deliver me from this body of death?” (Romans 7:24) Paul’s immediate response to his expressed grief was this: “Thanks be to God through Jesus Christ our Lord!”

Why does Paul praise God when faced with his own wretchedness, his own sin? Because

“There is therefore now no condemnation for those who are in Christ Jesus. For the law of the Spirit of life has set you free in Christ Jesus from the law of sin and death. For God has done what the law, weakened by the flesh, could not do. By sending his own Son in the likeness of sinful flesh and for sin, he condemned sin in the flesh, in order that the righteous requirement of the law might be fulfilled in us, who walk not according to the flesh but according to the Spirit.” (Romans 8:1-4).

Indeed, Paul had reason to praise God, Paul’s sinfulness notwithstanding. Every person who is “in Christ Jesus” will join in that praise, for there is no condemnation for anyone who has been rescued and redeemed by Christ.

When we stand before God to be judged there will be no place for excuses, no option for casting blame on another, no acceptable appeals to a higher cause. When we stand before God to be judged we stand alone and condemned by our sin; or we stand with Jesus our Advocate, who pleads our case on the basis of His finished work on the cross. According to His abundant grace, Jesus endured the wrath of God in our place so that our sins are no longer counted against us. If we abandon all our excuses and instead cry out for mercy, surely God will grant it (1 John 1:7; 2:1-2; 1 Peter 1:3-4).

Yes, thanks be to God through Jesus Christ our Lord.

Sharon surrendered her life to the Lord Jesus Christ in 1979. Deeply passionate about Truth, Sharon loves serving as a full-time volunteer research associate with Mormonism Research Ministry. Sharon and her husband live in Minnesota.
View all posts by Sharon Lindbloom →
This entry was posted in Forgiveness, Salvation. Bookmark the permalink.

2 Responses to My Bishop Made Me Do It