Is free speech just for the rich? 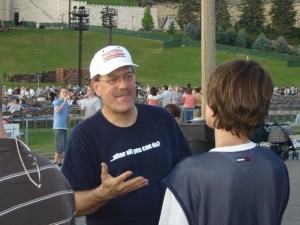 MRM associate Randy Sweet and I decided to head to Provo—home of the LDS Church-owned BYU Cougar football team—to hand out our Brigham Young million dollar bill tracts before the game on Saturday, October 23. Wouldn’t you know it! For two of the three hours that we handed out the tracts, it poured cats and dogs! Randy and I decided to tough it out anyway and had the ability to distribute hundreds of tracts to many of the 50,000+ spectators.

A security guard forced us to move from the public sidewalk we were standing on near a main gate, saying that while it was a public sidewalk, the church had a permit to control the street and sidewalk on Cougar game days. Thus, we went down the street to a corner to hand out our tracts. Across the street was a Republican “Mike Lee for U.S. Senate” campaign bus along with about fifty hearty supporters, all of them waving signs and generating honks from the passing cars. Several ladies holding campaign signs were standing at corner, so we ended up getting into a quick conversation. Telling one lady with a stroller that I was new to the state and didn’t know very much about Utah politics, I could see her wheels spinning as she obviously viewed me as a potential voter, just ripe for the picking.

“Would you like to go over there and meet Mr. Lee?” she asked after I asked several questions about the senate candidate’s positions on the issues. I agreed, and so in a rain that became steadier, she introduced me to the 39-year-old lawyer—a man once serving as a clerk for Supreme Justice Samuel Alito—who owned a double digit lead heading into the Nov. 2 election. I ended up having an uninterrupted fifteen minutes with this very faithful Mormon and the son of former BYU president Rex Lee. Why, I even shook the hand of one of his beautiful daughters!

The candidate was very cordial and appeared happy to talk—anything to break the monotony of waving at passing cars, I’m sure. I began by asking him about abortion (he’s Pro-Life except in cases of rape/incest, life of mother, and detrimental health of the infant).  We dialogued on that topic for a few minutes before I asked him the question I really wanted answered: “Do you believe in free speech?”

It seems like such an easy one. It was a softball, placed gently on a tee for him to hit out of the ballpark. After all, show me a politician who would answer “no” and I’ll show you a loser in the next election! As expected, he replied, “Absolutely, I’m a constitutional lawyer, and I will fight for this right to the very end.” I brought up the recent debacle involving liberal political commentator Juan Williams and how he had publicly said some things on the air about Muslims that the NPR leadership didn’t like, resulting in his firing. (Interesting, FOX News hired Williams immediately after this, giving him a $2 million contract!) Mr. Lee had not been following the news (“I’ve been busy getting ready for the election,” he said), so I spent several minutes providing him details.

“Yes, they (NPR) shouldn’t have fired him,” he concluded. With this, I proceeded to explain the situation that is currently taking place in Manti, Utah.  To catch everyone up, the Mormon Church is attempting to purchase a public street that runs in front of the temple by offering the city approximately $110,000. The church has not shown any real dire need to own this street, though everyone knows that such a purchase will result in having anyone who disagrees with the church banned from the street. For two weeks in June every year, hundreds of Christians come to Manti to share their faith with the tens of thousands of pageant-goers at the Mormon Miracle Pageant. Most of the dialogues take place on this very street. Once the church gets the title deed, they can tell anyone—protestors, Christians, communists, Utah Ute fans—to “please remove yourself from our street.”

At first, Mr. Lee made it sound like he really didn’t know or even understand the situation. Then, after I explained some more, he became very hard-nosed. “As long as it’s done legally, anybody should be allowed to purchase anything he wants,” he explained. My response:  “But if quenching free speech is the main reason an organization wants to purchase a public street, would you still be in favor?” “Absolutely,” he responded.

If Christians wanted a political ally in this fight, Mr. Lee is not the man. Immediately I thought of the next question. “What would you say if the LDS Church decided to buy the four blocks immediately around its Salt Lake City temple and the conference center, with the main purpose to disallow free speech, especially during the two general conferences that take place each year?” After all, since many who are in opposition to Mormonism use these public sidewalks, perhaps a strategy would be to buy the streets and sidewalks (just as the church purchased an adjacent street in 2000 to create Main Street Plaza) in order to move the “protestors” and other undesirables away from the LDS buildings. His answer was predictable: “As long as it was legally done, I see no problem with that.”

I do, Mr. Lee. Free speech is not just for those who have lots of disposable assets and can purchase public streets in order to stifle opposing viewpoints.  If the LDS Church cannot show a real need to purchase a public street, allowing such a purchase is morally and ethically wrong. Putting a clamp on free speech by using such a maneuver is something that I might expect to happen in a Communist country, not America. Legality is not the issue.

Mr. Lee, with a double-digit lead according to the polls, you will win. As a freshman senator, I pray you will remember that you have been elected to serve the people of Utah as our representative to uphold the Constitution, including the First Amendment. Don’t allow your LDS rose-colored glasses to taint your decisions.

As we parted ways on Saturday, you promised that you would allow me to communicate with you through email and you would respond. You repeated my full name and said you wouldn’t forget our conversation. Please know that I will hold you to your promise.

100 Responses to Is free speech just for the rich?