Posted on September 26, 2011 by Sharon Lindbloom 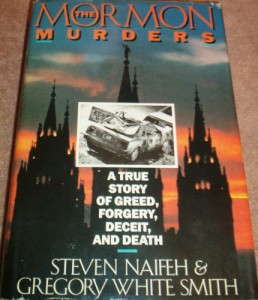 “On October 15, 1985, a pipe bomb wrapped with nails exploded in the hands of Steve Christensen, a young Salt Lake City businessman. Two hours later, a similar bomb shattered the calm of a quiet cul-de-sac in one of the city’s most exclusive neighborhoods…The next day, as the city reeled in panic, the unthinkable happened a third time. A bomb ripped the roof off a car belonging to Mark Hofmann, a young, highly respected rare-documents dealer. Unlike the others, Hofmann survived.

“All three victims were members of the Church of Jesus Christ of Latter-day Saints, known to the world as Mormons.

“The story that linked these three people in a circle of forgery, fraud, and murder would shock the world and shake the foundations of the Mormon Church…The frantic effort to suppress that story would bring the Mormon Church to the edge of lawlessness and thrust its highest officials into the middle of a murder investigation…and shine the spotlight of police and media attention into the darkest corners of Mormon history and doctrine…

“The Mormon Murders recounts the scam in which mild-mannered Mark Hofmann sold to the highest officials of the Mormon Church documents – including the ‘White Salamander’ letter – that cast doubt on the truth of the Church’s founding revelations. A remarkable tale of bribery, intrigue, forgery, and murder – and of the intrepid investigation that culminated in a trial itself as dramatic and unpredictable as the crimes themselves.” (Steven Naifeh and Gregory White Smith, The Mormons Murders – A True Story of Greed, Forgery, Deceit, and Death, Book Club Edition dust jacket)

Wow – pretty exciting. The true story of the Mark Hofmann forgeries and murders dominated newspaper and magazine headlines for weeks, if not months, and generated many full-length books as well. It is the stuff of which movies and television mini-series are made. Isn’t it odd that a movie has never been made about the Hofmann crimes?

With all the attention generated by the current Broadway hit “Book of Mormon,” television executive Arthur Axelman has been remembering “the longest and most difficult mini-series development in the then-William Morris Agency’s history.”

Mr. Axelman recently wrote an article for The Wrap titled “’The Mormon Murders’ — the Mini-Series the Latter Day Saints Shut Down.” In it, he recalls reading the newly completed manuscript for Steven Naifeh’s and Gregory White Smith’s then unpublished book, The Mormon Murders, declaring the story to be “a four-hour miniseries.” After a poorly conceived attempt by one screenwriter, another, Dale Wasserman (“One Flew Over the Cuckoo’s Nest” and “Man of La Mancha”), was called in for a rewrite based on Naifeh’s and Smith’s book.

“Wasserman’s rewrite was good, but not great. We believed the underlying material deserved better as we wanted to attract a major director and star talent who would elevate this beyond the ordinary television movie. In order to accomplish that we needed a four-hour teleplay that approached brilliance.

“After several drafts, Wasserman delivered and CBS ordered what had now become Murder Among the Saints to production. A license fee was negotiated and it came in around nine million dollars.

“When word hit Salt Lake that CBS was committed to tell the Mormon [M]urders story as a four-hour mini-series, it is said that LDS President Gordon B. Hinckley called CBS founder and chief William S. Paley and asked, ‘How would you like some outsiders doing a vicious four hour attack on your Jews?’”

“Murder Among the Saints” was dead in the water. Over the years several “outsiders” have passed on producing the mini-series, while insiders wouldn’t dream of doing it. But Mr. Axelman holds out hope:

“It was and is a brilliant script, the most concise and coherent of all, and one day, perhaps, will be produced.”

Until then, since Naifeh and Smith (who later won the Pulitzer Prize for An American Saga) have done an admirable job in presenting the detailed truth of this compelling story — as have many other authors — you can settle in and read all about it.

Sharon surrendered her life to the Lord Jesus Christ in 1979. Deeply passionate about Truth, Sharon loves serving as a full-time volunteer research associate with Mormonism Research Ministry. Sharon and her husband live in Minnesota.
View all posts by Sharon Lindbloom →
This entry was posted in Gordon B. Hinckley, Mormon Culture, Mormon History and tagged Gordon B. Hinckley, Mark Hofmann. Bookmark the permalink.

42 Responses to Murder Among Mormons