Posted on January 5, 2012 by Sharon Lindbloom

A crusade (of sorts) is moving across Facebook. It is targeting pages that are critical of Mormonism. Who the crusaders are is unknown, but it seems reasonable to suggest that they may be Latter-day Saints.

The crusade is aimed at silencing those who disagree with Mormonism. In a broad sense (and from the perspective of many Mormons), this has some biblical support:

“For this is the will of God, that by doing good you should put to silence the ignorance of foolish people.” (1 Peter 2:15)

The Facebook crusader’s strategy, however, does not involve “doing good,” nor does it seek to expose what some Mormons would call “the ignorance of foolish people.” The Facebook crusade instead is employing oppressive tactics in order to have critical discussion shut down and/or removed from public view.

Though a bit more complicated than I’ll describe here, the program goes something like this: A site critical of Mormonism is identified by the crusaders; this group of people begin a flurry of reporting, flagging the page’s status updates, videos and comments as “hate speech”; Facebook’s automated response sends warnings to the page owners and Admins, removes flagged “offensive” content, and eventually disables (temporarily) the personal accounts of those who receive sufficient warnings.

Trying to look at things from a Mormon perspective, I can acknowledge how some things posted may be reasonably understood as offensive to a Mormon (e.g., a discussion about sex; namely, the physically sexual relationship between Heavenly Father and Mary. In fact, this Mormon teaching is offensive to me, too!). Due to “one or more reports,” Aaron received a Facebook warning at Christmastime related to his audio series on the Virgin Birth: 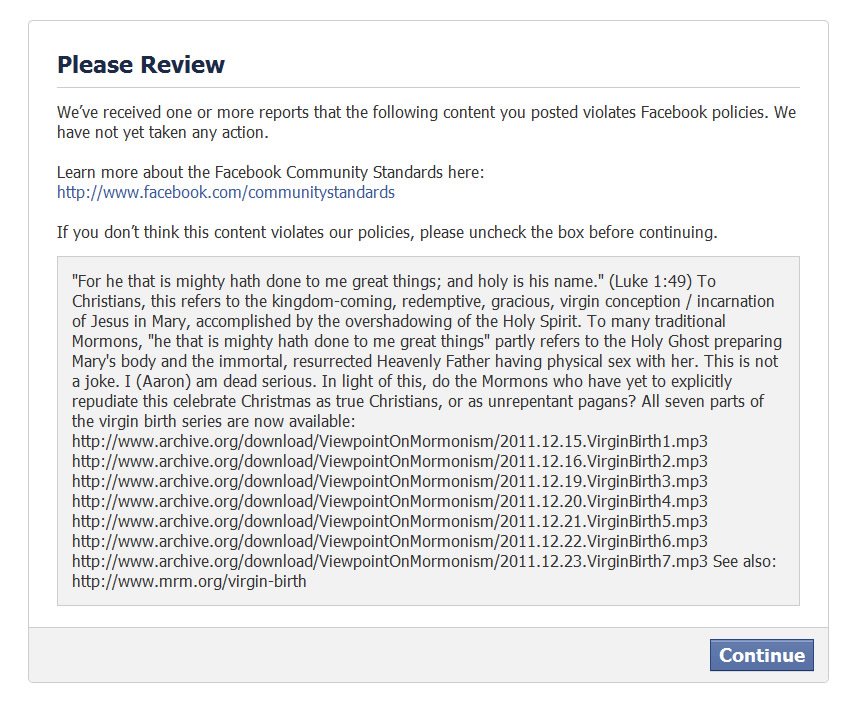 But most of the things that have been flagged in this crusade  (that I am aware of) reflect mere disagreements between Christians and Mormons regarding spiritual issues. For example, this (subsequently flagged) Facebook comment was posted on December 9, 2011 as part of an ongoing conversation:

“God has provided these tools to validate His truth. While there is an element of faith, I’d say that faith is based on things that are unseen, BUT NOT PROVEN false. Science and history have definitively proved the Book of Mormon not to be [of] God. The Bible holds its own.”

“Which Jesus, Elizabeth? The created brother of satan or the Un-Creator of all things? God?”

“oh! but one last thing Bobbi…how did you check to make sure that the answer to your prayer was truth?”

According to Facebook policy, the use of a person’s name in comments, even in a response to a comment that person may have previously posted, can be construed as “harassment.” That explains Facebook deleting some of the comments, but it does not explain the initial reporting of these conversational comments. Only a crusade designed to itself harass and silence Mormonism’s critics makes sense.

On December 26th a Christian friend received a warning from Facebook for posting a link to Aaron’s video project, God Never Sinned – Do Mormons Agree? Facebook removed the entire post and threatened the owner of the page with possible loss of his Facebook account. Facebook stated that the video link had been reported, and anything that is “hateful, threatening, or obscene” is not allowed. Yet the God Never Sinned video consists entirely of Mormons responding to a question that clarifies their own individual beliefs. Why flag that as hateful?

All of this sounds a bit un-American, or at least unlike the America envisioned by her Founding Fathers, who placed a premium on freedom of speech and the lively, open exchange of ideas. In fact, as others have noted elsewhere, these crusaders on Facebook seem to be following in the footsteps of Mormonism’s founder. When Joseph Smith was confronted with dissident voices in Nauvoo, Illinois, rather than answer them, he did his best to silence them by destroying the newspaper and press that gave the critics a platform.

Yet another aspect of this crusade is equally troubling. Assuming that the crusaders are Mormons, it must be noted that Mormons expend a lot of energy trying to convince the world that they are Christians (that is, followers of Jesus Christ). But their disregard for biblical teaching regarding how to deal with critics demonstrates a different spirit.

The Bible, recognized by Christians to be the very Word of God, does not tell followers of Christ to silence critics by taking away their voices.

The Bible tells us of the benefits of a “soft answer.” It proclaims, “To make an apt answer is a joy to a man, and a word in season, how good it is!” It teaches that the righteous think about how to answer, as opposed to the evil responses of the wicked (Proverbs 15:1, 23, 28)

The apostle Paul talks about “persuading” people of the truth while being “able to answer those” who are mistaken in their spiritual focus. He says, “Let your speech always be gracious, seasoned with salt, so that you may know how you ought to answer each person.” (2 Corinthians 5:11-12; Colossians 4:6)

And, of course, there are the familiar instructions for God’s people to “contend” for the faith, be ready to “give a defense” of that faith, while “patiently enduring evil, correcting [spiritual] opponents.” (Jude 3; 1 Peter 3:15; 2 Timothy 2:24-26)

Christians are not supposed to bully those who disagree with them by forcing them into silence. Christians are supposed to answer the objections and persuade opponents by speaking the truth, hoping that the lost and deceived will “come to their senses and escape the snare of the devil.”

This is what the Christians on Facebook (and here on Mormon Coffee) are endeavoring to do. What, then, is the aim of the crusaders?