To Hell with My Friends

Posted on February 13, 2012 by Sharon Lindbloom

In studying Revelation chapter 14 recently I have taken some time to think about the contrast between heaven and hell. John’s vision presents a heaven filled with a multitude of redeemed people—together. They are portrayed as resting from their labors, singing a new song and, all together as one, following the Lamb wherever He goes. They are living in community; they are living in intimacy with God.

The contrast is John’s vision of hell – filled with those who are neither forgiven nor redeemed in Christ. One Christian pastor/author writes:

“It would be wonderful to believe that everyone will experience the state of eternal blessedness John describes in the book of Revelation. However, John’s vision gives a very different picture. John says that for some people the first five minutes of eternity will usher them into another reality altogether. The next portion of this vision shows the state of eternal condemnation…

“John paints a picture of torment and aloneness that no one would ever want to experience. It is a very different vision than the false notion some people have when they think of hell. I have heard people say things like, ‘I don’t think I would mind hell. All my buddies will be there. At least we will be together.’ …That’s not the picture that John gives [in Revelation 14:6-12]. Everything that makes community possible: humility, servanthood, kindness, love, and honesty will not exist in this place. These are gifts of God, and to reject God is to reject everything that makes community possible.” (John Ortberg, Experience God’s Power, 42)

Those who joke about enjoying hell with their friends do not understand the seriousness of spending eternity separated from Christ. God’s revelation of hell is no laughing matter. Think about how He describes it: 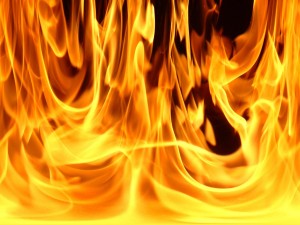 “Then I saw another angel flying directly overhead, with an eternal gospel to proclaim to those who dwell on earth, to every nation and tribe and language and people. And he said with a loud voice, ‘Fear God and give him glory, because the hour of his judgment has come…If anyone worships the beast and its image and receives a mark on his forehead or on his hand, he also will drink the wine of God’s wrath, poured full strength into the cup of his anger, and he will be tormented with fire and sulfur in the presence of the holy angels and in the presence of the Lamb. And the smoke of their torment goes up forever and ever, and they have no rest, day or night, these worshipers of the beast and its image, and whoever receives the mark of its name.” (Revelation 14:6-7; 9-12)

This is a sobering picture of eternity. Focusing on the concept of no rest in the above passage, Dr. Ortberg wrote,

“Those who cut themselves off from God cut themselves off from all hope of renewal. Another way of putting it is that these people get no relief, no rest from a guilty conscience, no break from isolation. Those who will enter a state of eternal condemnation will have no rest from self-centeredness, boredom, self-loathing, regret, resentment, sadness, or the misery of sin. No rest day or night.” (Experience God’s Power, 73)

This is a graphic description of torment, exile, and restless bone-weariness forever. God intends us to be deeply troubled by the prospect of hell; it is serious business. He doesn’t have in mind that we should treat the reality of His judgment – His righteous wrath – with flippancy.

Which brings me to Joseph Smith. On a Sunday afternoon in 1843 he told a congregation of Latter-day Saints,

“I see no faults in the Church, and therefore let me be resurrected with the Saints, whether I ascend to heaven or descend to hell, or go to any other place. And if we go to hell, we will turn the devils out of doors and make a heaven of it. Where this people are, there is good society. What do we care where we are, if the society is good?” (Joseph Smith, History of the Church, 5:517)

Apparently, this was a joke Joseph Smith very much enjoyed. According to Joseph’s former First Counselor William Law, when Law and others sought to bring reformation to the Church in 1844 by bringing their concerns to Joseph,

“…our petitions were treated with contempt; and in many cases the petitioner spurned from their presence and particularly by Joseph, who would state that if he had sinned, and was guilty of the charges we would charge him with, he would not make acknowledgment, but would rather be damned; for it would detract from his dignity, and would consequently ruin and prove the overthrow of the Church. We would ask him on the other hand, if the overthrow of the Church was not inevitable, to which he often replied, that we would all go to Hell together, and convert it into a heaven, by casting the Devil out; and says he, Hell is by no means the place this world of fools suppose it to be, but on the contrary, it is quite an agreeable place…” (Nauvoo Expositor, 1-2)

Joseph Smith’s flippancy toward God’s judgment of sin makes me think of the prophet Jeremiah’s revelation:

“Thus says the LORD of hosts:…To whom shall I speak and give warning, that they may hear? Behold, their ears are uncircumcised, they cannot listen; behold, the word of the LORD is to them an object of scorn; they take no pleasure in it…from prophet to priest, everyone deals falsely. They have healed the wound of my people lightly, saying, ‘Peace, peace,’ when there is no peace…I set watchmen over you, saying, ‘Pay attention to the sound of the trumpet!’ But they said, ‘We will not pay attention.’ Therefore hear, O nations, and know, O congregation, what will happen to them. Hear, O earth; behold, I am bringing disaster upon this people, the fruit of their devices, because they have not paid attention to my words…” (Jeremiah 6)

Followers of Joseph Smith — Pay attention to the sound of the trumpet! It is not too late to turn to the one true God and find rest for your souls.

Sharon surrendered her life to the Lord Jesus Christ in 1979. Deeply passionate about Truth, Sharon loves serving as a full-time volunteer research associate with Mormonism Research Ministry. Sharon and her husband live in Minnesota.
View all posts by Sharon Lindbloom →
This entry was posted in Christianity, Joseph Smith and tagged Hell, Judgment. Bookmark the permalink.

10 Responses to To Hell with My Friends