Mormons and the Bible

In a discussion with an older Mormon missionary, Sister G learned that I had prayerfully read the Book of Mormon but had not found it to be the word of God. In her effort to discover what obstacle stood between me and Mormonism, we talked about a lot of different doctrinal issues. We discussed contradictions between the Bible and the Book of Mormon, the doctrine of God, the biblical tests of a true prophet, the authority of Scripture, and the Mormon law of eternal progression. To everything Sister G said I found myself responding with, “But the Bible says…” After about half an hour of this, Sister G grew frustrated and told me, “I know what your problem is. You have to forget the Bible.”

Ever since that long-ago encounter with Sister G I have found, in talking with Mormons, that most hold the same attitude towards the Bible–though this attitude is expressed in different ways and in varying degrees.

According to the LDS Church’s creed, the Articles of Faith, Mormons “believe the Bible to be the word of God as far as it is translated correctly” (Article 8), but Mormon leaders don’t believe (or teach) that it has been translated (or transmitted) correctly. Sister G’s conviction that we need to “forget the Bible” reflected what she had been taught as a Mormon; namely, that only a fool thinks the Bible alone, without clarification and correction from Mormonism’s modern scriptures and prophets, accurately reflects God’s truth (2 Nephi 29:6). In the words of Mormonism’s tenth prophet and president Joseph Fielding Smith, “Guided by the Book of Mormon, Doctrine and Covenants, and the Spirit of the Lord, it is not difficult for one to discern the errors in the Bible” (Doctrines of Salvation 3:191).

Given this prevalent attitude within Mormonism, I did a double-take when I read that Mormon Bishop David Kenley of Pennsylvania told a Lancaster Online journalist that “Mormons ‘wholeheartedly embrace’ the Bible.” In an article titled, “Mormon Moment: Defending the Faith,” Mr. Kenley explained that it is “particularly painful” when Mormonism is regarded as non-Christian “because Mormons are ‘living their lives emulating Jesus Christ in every way they can.’” 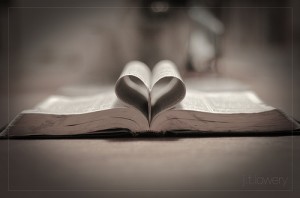 The Love of God by Justin Lowrey

One way Mormons do not emulate Jesus is in their view of biblical scripture–because Jesus actually did wholeheartedly embrace the Bible (at that time, the Old Testament).

“Jesus believed that the Old Testament was divinely inspired, the veritable Word of God. He said, ‘The Scripture cannot be broken’ (John 10:35). He referred to Scripture as ‘the commandment of God’ (Matthew 15:3) and as the ‘Word of God’ (Matthew 15:6). He also indicated that it was indestructible: ‘Until Heaven and earth pass away, not the smallest letter or stroke shall pass away from the law, until all is accomplished’ (Matthew 5:18).

“When dealing with the people of his day, whether it was with the disciples or religious rulers, Jesus constantly referred to the Old Testament: ‘Have you not read that which was spoken to you by God?’ (Matthew 22:31); ‘Yea; and have you never read, “Out of the mouth of infants and nursing babes thou has prepared praise for thyself”?’ (Matthew 21:16, citing Psalm 8:2); and ‘Have you not read what David did?’ (Matthew 12:3). Examples could be multiplied to demonstrate that Jesus was conversant with the Old Testament and its content. He quoted from it often and he trusted it totally. “ (Josh McDowell Ministry)

Conversely, Mormons are taught that the Bible “passed through generations of copyists, translators, and corrupt religionists who tampered with the text” (Ezra Taft Benson, Ensign, October 2011, 55).

An older (but never repudiated) statement by LDS apostle Orson Pratt explained the effect from these “generations” of corrupt religionists tampering with the biblical text. Asking the question, “Can we rely upon [the Bible] in its present known corrupted state, as being a faithful record of God’s word?” Mr. Pratt first rehearsed a laundry list stating that portions of the Bible had been “lost…manipulated, changed and corrupted,” then answered the question:

“…who, in his right mind, could, for one moment suppose the Bible in its present form to be a perfect guide? Who knows that even one verse of the Bible has escaped pollution, so as to convey the same sense now that it did in the original? (Divine Authenticity of Book of Mormon, “The Bible and tradition, without further revelation, an insufficient guide,” 47)

This doesn’t sound like Mormons are taught to “wholeheartedly embrace” the Bible.

The current LDS prophet and president, Thomas Monson, expressed his own attitude toward the Bible in a letter written by the First Presidency and sent to the Church in 1992. The letter said in part,

“The Bible, as it has been transmitted over the centuries, has suffered the loss of many plain and precious parts… Many versions of the Bible are available today. Unfortunately, no original manuscripts of any portion of the Bible are available for comparison to determine the most accurate version. However, the Lord has revealed clearly the doctrines of the gospel in these latter days. The most reliable way to measure the accuracy of any biblical passage is not by comparing different texts, but by comparison with the Book of Mormon and modern-day revelations.” (Presidents Ezra Taft Benson, Gordon B. Hinckley, and Thomas Monson, “Letter Reaffirms use of King James Version Bible,” Church News, June 20, 1992, 3)

Again, wholehearted embracement of the Bible is not a reasonable expectation when Mormons are taught that the text has been corrupted and cannot be trusted except where it might agree with “the Book of Mormon and modern-day revelations.”

Christian theologian J.I. Packer once said, “If I were the devil, one of my first aims would be to stop folk from digging into the Bible… I should do all I could to surround it with the spiritual equivalent of pits, thorns, hedges, and man traps to frighten people off.”

This is exactly what Mormonism has done. Insisting that people cannot safely “rely on the dead letter of the Bible,” LDS leaders have led people away from the truth that God Himself has given us: “the word of God is living and active” (Hebrews 4:12. The “dead letter” quote is Joseph Fielding Smith, Answers to Gospel Questions, 1:97).

If Mormons were to dig into the Bible, they would discover that the Word of God is not only living and active, but it is “sharper than any two-edged sword, piercing to the division of soul and of spirit, of joints and of marrow, and discerning the thoughts and intentions of the heart. And no creature is hidden from His sight, but all are naked and exposed to the eyes of Him to whom we must give account” (Hebrews 4:12-13). With that discovery, we creatures realize that we are all hopelessly lost because of our sin and rebellion against Holy God. And with that realization, we fall on our knees to plead for God’s mercy. And when God answers our prayers, we rise from our knees as new creations, alive in Christ and filled with hope.

No wonder the devil does all he can to keep us from truly embracing the Bible with our whole hearts.

Sharon surrendered her life to the Lord Jesus Christ in 1979. Deeply passionate about Truth, Sharon loves serving as a full-time volunteer research associate with Mormonism Research Ministry. Sharon and her husband live in Minnesota.
View all posts by Sharon Lindbloom →
This entry was posted in Bible, Mormon Scripture and tagged Bible. Bookmark the permalink.

31 Responses to Mormons and the Bible