Mormonism “fell a heap of ruins.”

Stephen Burnett became a Mormon in November of 1830. In 1831 he was ordained to the office of High Priest, and in 1832 he became a Mormon missionary. He was a faithful Mormon for many years, but what he witnessed in Kirtland, Ohio, did in his faith. Historian Dan Vogel explains, “By late 1837 [Burnett] had become disillusioned with church leaders, and by 1838 had publicly denounced Joseph Smith.”

Joseph Smith responded to Burnett’s disaffection by stating that Burnett was only concerned for his money. According to Smith, Burnett justified his lack of financial support for the Church when he “proclaimed all revelation lies.”

Certainly Stephen Burnett’s disillusionment with Mormon Church leadership cannot be entirely divorced from financial issues. Kirtland, Ohio, like the rest of the United States, had experienced grave financial difficulties beginning in 1836. But one thing that set the 1837 failure of the (Mormon) Kirtland Safety Society apart from other bank failures of the time was that Mormons understood the Kirtland “bank” to have been established according to revelation. Many Mormons left the Church following the failure of the Kirtland Safety Society. Yet, according to Stephen Burnett, this was not the final straw for him. 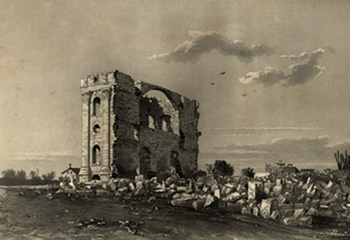 On April 15, 1838 Burnett wrote a letter to explain why he decided to leave the Church.  The letter was addressed to Lyman E. Johnson, a man Burnett thought was one of the Twelve Apostles. Johnson had actually been excommunicated two days before this, but the news had not yet reached Stephen Burnett. The text that follows is taken from Burnett’s letter.

Br[other]. Johnson — …my heart is sickened within me when I reflect upon the manner in which we with many of this Church have been led & the losses which we have sustained all by means of two men in whom we placed implicit confidence, that Joseph Smith & Sidney Rigdon are notorious liars I do not hesitate to affirm, & can prove by a cloud of witnesses… I have reflected long and deliberately upon the history of this church & weighed the evidence for & against it – loth to give it up – but when I came to hear Martin Harris state in public that he never saw the plates with his natural eyes only in vision or imagination, neither Oliver [Cowdery] nor David [Whitmer] & also that the eight witnesses never saw them & hesitated to sign that instrument for that reason, but were persuaded to do it, the last pedestal gave way, in my view our foundations was sapped & the entire structure fell a heap of ruins, I therefore three week[s] since in the Stone Chapel gave a full history of the church since I became acquainted with it, the false preaching & prophecying etc of Joseph [Smith] together with the reasons why I took the course which I was resolved to do, and renounced the Book of Mormon with the whole scene of lying and deception…believing as I verily do, that it is all a wicked deception palmed upon us unawares[.]

…after we were done speaking M[artin] Harris arose & said he was sorry for any man who rejected the Book of Mormon for he knew it was true, he said he hefted the plates repeatedly in a box with only a tablecloth or a handkerchief over them, but he never saw them only as he saw a city through a mountain… I am well satisfied for myself that if the witnesses whose names are attached to the Book of Mormon never saw the plates as Martin H[arris] admits that there can be nothing brought to prove that any such thing ever existed for it is said on the 171 page of the book of covenants [D&C 17:5] that the three [witnesses] should testify that they had seen the plates even as J[oseph] S[mith] Jr & if they saw them spiritually or in vision with their eyes shut – J[oseph] S[mith] Jr never saw them any other way & if so the plates were only visionary and I am well satisfied that the 29 & 37 Chap[ter]s of Isai[a]h & Ezekiel together with others in which we depended to prove the truth of the book of Mormon have no bearing when correctly understood but are entirely irrelevant…  (Dan Vogel, ed., Early Mormon Documents, Volume 2, 290-293)

Stephen Burnett wanted to believe. He stuck with the Prophet — and the Church – believing (and doing) what he was told. But when he discovered that:

The “last pedestal gave way” and the whole of Mormonism came crashing down. Stephen Burnett had the courage to be honest with himself. He “weighed the evidence for & against,” and though he did not want to give up his faith in Mormonism, he came to realize that a faith built on lies is worthless.

I don’t know if Stephen Burnett ever rested in the One worthy of unreserved trust, but perhaps, at some point, he found the hope expressed in a hymn penned right about the time his faith in Mormonism was crumbling.

My hope is built on nothing less
Than Jesus’ blood and righteousness.

25 Responses to Mormonism “fell a heap of ruins.”