Mormonism and the United States Constitution

With the 4th of July celebration of America’s independence on our minds, a look at Mormonism and the Constitution seems timely. I originally wrote the following article in 1999 after an experience I had while participating in a Christian outreach at a Mormon temple open house event. Though it is possible that the Mormon Church has modified its ways over the last 12 years (I did not experience this same sort of behavior at the Kansas City temple outreach earlier this year), in light of the ongoing Facebook reader-initiated censorship of pages that challenge Mormonism, the article remains relevant today.

When Christians evaluate a group claiming to represent God, the measuring rod used is generally doctrinal. The secular cult-watching community has a different perspective. They are not concerned with beliefs, but instead look at behaviors. Using these criteria, Mormonism, with its highly moral, family-centered image appears pretty benign to those unconcerned about heaven and hell. Yet, many behaviors associated with radical cult groups are subtly present in Mormonism. I was recently confronted with one in particular–information control–while ministering at the LDS temple open house in Madrid, Spain.

The focus of our outreach was to give temple visitors information which would help them better understand both the doctrines of the LDS Church and biblical teachings on the same issues. The literature compared LDS and biblical temples along with their rituals. Also included was a concise comparison of the basic doctrines of Mormonism and those of historic, biblical Christianity.

The accuracy of the literature was never challenged. Several Mormons commented on the truthfulness of what it said. Even so, many thought of us as “enemies.” Those in authority at the temple did their best to control the information we wanted to share.

The first day of the outreach the LDS Church assigned their missionaries and volunteers to: distract us by engaging us in extended conversation; block our access to the public by forming human barriers in front of us; follow after visitors we’d had contact with to ask them to throw away the literature; become our “shadows,” countering our literature with their own. These are the tactics commonly employed by Mormons at outreaches within the United States. And in the US, because of our Constitutional rights, this is generally all that can be done to keep people from receiving non-Mormon information. Not so in Spain.

As I mentioned, the LDS Church had their people on the street handing out literature right beside us on the first day of outreach. They also had people all over Madrid distributing invitations to the temple open house. On the second day of outreach these Mormons were pulled off the street. Temple security called the police, complaining that our team was in violation of a local litter law that prohibited the “mass distribution” of printed material. After the police explained the ordinance, we consulted with several local attorneys and learned that we could continue our outreach if we first spoke with the people and asked if they would like more information. So we modified our approach to be within the letter and spirit of the local ordinance. 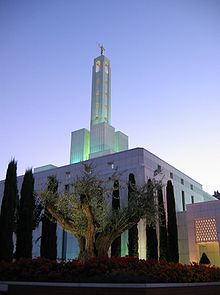 Spain does not share America’s Constitution, but it does uphold the freedoms of expression and information. These rights are very dear to the Spaniards with Franco’s reign still a vivid memory. Even so, LDS Church officials unabashedly harassed our outreach team through manipulation of the local police with total disregard for civil rights.

I found this behavior interesting in light of the LDS view of the rights granted under the US Constitution.

In February LDS Apostle Russell Ballard said, “[the] principles and philosophies upon which our constitutional law is based are not simply the result of the best efforts of a remarkable group of brilliant men. They were inspired by God, and the rights and privileges guaranteed in the Constitution are God-given, not man derived…sacred, essential and inalienable.” (Church News 2/27/99 p. 6)

Third LDS prophet John Taylor taught, “Besides the preaching of the gospel, we have another mission, namely, the perpetuation of the free agency of man and the maintenance of liberty, freedom, and the rights of man.” Taylor also said, “We expect Latter-day Saints…to avoid lawlessness of every kind and interference with men’s rights in any shape.” (The Gospel Kingdom, pp. 222, 308)

Eighth LDS prophet George Albert Smith claimed that the United States government, with all its liberties, is “to be an example unto the nations of the earth…” (Sharing the Gospel With Others, p. 169)

Ninth LDS prophet David O. McKay maintained that it is everyone’s duty and obligation “to preserve not only the Constitution of the land but also the Christian principles from which sprang that immortal document.” (Gospel Ideals, p. 315)

Thirteenth LDS prophet Ezra Taft Benson declared that the Constitution “was established ‘for the rights and protection of all flesh according to just and holy principles’ (D&C 101:77-80).” (The Red Carpet, p. 284, emphasis added)

So great is the LDS commitment to Constitutional liberties that President McKay said, “Next to being one in worshiping God, there is nothing in this world upon which this Church should be more united than in upholding and defending the Constitution of the United States.” (Gospel Ideals, p. 319)

Apparently the LDS Church believes fiercely in the divine inspiration of this document. Yet it’s not only committed to the document, but to the principles upon which that document is founded. While pledging to uphold and defend these inalienable rights throughout the entire world, the LDS Church concurrently hinders the free exercise of those very rights when they conflict with its desired outcomes.

Sharon surrendered her life to the Lord Jesus Christ in 1979. Deeply passionate about Truth, Sharon loves serving as a full-time volunteer research associate with Mormonism Research Ministry. Sharon and her husband live in Minnesota.
View all posts by Sharon Lindbloom →
This entry was posted in Civil Liberties and tagged Constitution, Madrid Temple, Mormonism, Temple outreach. Bookmark the permalink.

29 Responses to Mormonism and the United States Constitution