The Second Anointing of Modern-day Mormonism

Posted on January 7, 2013 by Sharon Lindbloom 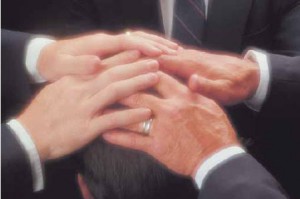 Latter-day Saint Tom Phillips was an Area Executive Secretary for the Mormon Church in the United Kingdom when an LDS General Authority invited him to receive his Second Anointing in the Preston England Temple. On Sunday, 19 May 2002, Mr. Phillips and his wife received their “second endowment,” in the company of four additional worthy couples, under the leadership of Mormon Apostle M. Russell Ballard. Eighteen months later Mr. Phillips’ faith in Mormonism was beginning to crumble.

Tom Phillips presents a detailed chronicle of his experience and the little-discussed Second Anointing temple ordinance on his webpage at Mormon Think. According to his account, in the days leading up to his special endowment,

“I reflected on my own life and personal worthiness. I read all that Elder McConkie had written on the subject [as he had been told to do] and looked forward to the day with excitement. Basically, Elder McConkie wrote that, during the first endowment you are given certain blessings to become a king and a priest (queen and priestess) to the most high God, and these blessings are conditional on you remaining worthy of them. With the second endowment, the conditions are removed as you have already proven your faithfulness and entitlement to the blessings. Therefore, you are sealed up to the highest degree of the celestial kingdom unconditionally. Any sins committed afterward may render you liable to the buffetings in the flesh, but they will not prevent you from attaining your exaltation. The only sin that is unpardonable is denying the Holy Ghost (or in some passages the shedding of innocent blood).

“I had never expected this to happen to me. I assumed I would be judged in the next life, not have that judgment made in this life. It meant I and my wife would be guaranteed a celestial glory unless we committed the ‘unpardonable sin’ which seemed to be unthinkable at the time. We had made it, the Lord, through his prophet, had informed us we were worthy of this high exaltation.”

Yet Mr. Phillips immediately encountered a conflict between being worthy of exaltation and obeying the counsel of his Church leaders. In order to protect the “secret” of the “second endowment” ordinance, the Phillipses were instructed not to tell anyone about the ordinance, to be vague or even misleading if questions arose. Tom Phillips explained,

“I did not like lying to my family and friends as to our whereabouts that weekend. I did not feel comfortable as it was dishonest but I was instructed not to disclose what was happening. To tell people you will be at the temple on a Sunday, when supposedly all temples are closed, would raise further questions. I therefore told my children we were going to the temple for the weekend and would be attending a special meeting with Elder Ballard and the Area President on Sunday. This was not too unusual for my children to accept as I regularly attended Area Presidency meetings and had been assisting these same brethren the day before at a training session for stake presidents. Also, it was as truthful as I considered I could be while still keeping the second anointing secret…

“While walking in the temple grounds in the early evening [of 18 May] we unexpectedly met a member of our ward who had attended a family wedding that day. She asked us what we were doing at the temple on a Saturday evening. I quickly mentioned something about Area Presidency meetings (she knew of my calling at the time, that I worked closely with the Area Presidency) and changed the subject. Again, I did not feel comfortable lying for the Lord.”

Though he doesn’t suggest as much, perhaps Mr. Phillips’ discomfort over deliberately disobeying one of the requirements for exaltation (i.e., “Be honest in our dealings with others and with the Lord” Gospel Principles, 291, 1986 edition) produced a seed of doubt that lay dormant until he began to “consider in more depth other truth claims of the church.”

During his Second Anointing Mr. Phillips was “ordained a king and a priest unto the Most High God, to rule and reign in the House of Israel forever.” He was given “the fullness of the priesthood” and a blessing that promised, without any condition of continued obedience, that he would “attain unto the Godhood,” have the “Power to be a member of a Godhead,” and was henceforth “Sealed up to eternal life” (among other things).

This all raises many questions in relation to Mormon doctrine and culture. Here is one to get the discussion started.

Our Mormon friends often criticize the Christian belief that our works do not contribute to our salvation. Some Mormons believe that Christians call upon this doctrine to justify sinful lifestyle choices, suggesting that there is no basis upon which to call a sinning Christian to repentance if his or her works have no effect on the person’s salvation. While I do not agree with this premise, I wonder: Do Mormons believe the same about those who have had their calling and election made sure via a Second Anointing?

Listen to Tom Phillips discuss his Second Anointing experience in this 2-part interview from the Mormon Stories Podcast with John Dehlin.

80 Responses to The Second Anointing of Modern-day Mormonism