From the Mailbag (Heavenly Grandfathers) 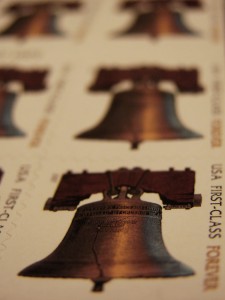 Some critics say that Mormons believe that when they become gods they will have glory equal with Father. But that is simply a lie. I know that our Father will be always our GOD and we will worship Him for whole eternity, becoming gods is not to rob Father’s glory, but to give Him more glory. If my children [have] success in their life, it will not rob anything from me it will only give me more honor. God wants us to be like Him, He wants us to have what He has, like every good parent wishes to his children. If my kids become like me or even better I still will be their mother and they still will honor and respect me, if they are good children, of course. I am not dreaming that one day when I become god I will take away something from MY Father in heaven. That is what Lucifer wanted, he wanted glory of the Father and he wanted everybody to worship him. That is why he is devil now, he did not keep his first estate…

I believe that Jesus is creating many more worlds, and he will do it for eternity, because it will be always infinity more space beyond each new world he will create. The more worlds he creates the more glory it brings to his Father. I believe that if I overcome like Jesus overcame I will inherit what he inherited and as joint heir with him will be given this opportunity to create more worlds like he does, and by doing it I will glorify my Father in heaven. The same like earthly children when they prosper in their lives they bring more honor to their earthly parents and not taking away from them something. And when their grandchildren follow their parents those already grandparents are even more proud of their children. And people say what a wonderful parents they are, they have not only great children but even great grandchildren.

…I read all the same Bible passages as you, but I understand them quite differently (as I have demonstrated in past emails). I would just like to comment that, as I understand things, “inheriting” all that God has is not the same as becoming a God like Him. What He has and what He is are two different things altogether. A silly analogy is this: I can prepare a will and leave all that I have to my new puppy; this makes him my heir. When I die he will inherit everything I have — but he will not inherit what I am. That is, he will not become human — he will remain a dog.

And again, I really would like to point out, that I want to do it NOT to convince you but ONLY to show what it really means from the point of view of latter-day saints and NOT what critics say it means.

In that spirit, I wonder if you can help me understand this a bit better. Here is one place I have a lot of trouble with this whole idea of “many Gods but one for us.” You have said many times (for emphasis, I think) that though you believe there are many true Gods, you only worship one. You say that you (and others) becoming a God will not take anything away from Heavenly Father, but it will instead increase His glory.

(From a human standpoint, there is not much we could do that would dishonor our grandfathers more than to totally ignore them and pretend they don’t exist — or think they don’t matter.)

I honestly cannot understand how this seems good to you and others of your faith… For me, I could never comfortably deny my God; I could never comfortably instruct my children to love and worship me and ignore my God. He is everything to me and I want nothing more than for others to know Him and His love, too. The day that my children gave their hearts to Him (though this put me in second place) was one of the best days of my life — and it continues to bring me great joy and comfort…

[Some]thing that you can not accept and makes no sense for you is why God doesn’t want to teach us about His God or as we can call Him our grandfather God. Sharon, you probably know that Mormons believe that we have our Heavenly Mother. And still Father did not reveal to us anything about her or revealed very little. Even through the Bible I personally see that God does not reveal to us MANY MANY other things. Why? There are many reasons that God only knows…why God does not reveal to us about other worlds and His Gods ancestors, let’s call them this way, it is because God reveals to us ONLY things that IMPORTANT for our SALVATION!!! What is not important for our salvation can wait for a time when ALL things will be revealed to us.

Thank you for speaking to my concerns about the continuing cycle of Gods and the denial of their existence by our Heavenly Father. I appreciate your effort to explain, but you really didn’t help me understand. You talked about how God doesn’t reveal everything to us, and this for His good purposes. I agree with you. But that wasn’t my question. I did not ask why God doesn’t tell us about His God (and our Heavenly Grandfather), but how our Heavenly Grandfather is honored and glorified when His own son (Heavenly Father) denies His very existence. As I wrote,

Anna, this is a big problem for me. I cannot reconcile this with other things you have told me (e.g., that this system brings glory and honor to Heavenly Father). And I certainly cannot reconcile it with the teachings of the Bible as I understand them…

Sharon surrendered her life to the Lord Jesus Christ in 1979. Deeply passionate about Truth, Sharon loves serving as a full-time volunteer research associate with Mormonism Research Ministry. Sharon and her husband live in Minnesota.
View all posts by Sharon Lindbloom →
This entry was posted in God the Father, Nature of God, Nature of Man and tagged Eternal progression, godhood, Heavenly Grandfather. Bookmark the permalink.

90 Responses to From the Mailbag (Heavenly Grandfathers)