Elizabeth Smart’s Courage Within the Tragedy of Mormonism

Elizabeth Smart was kidnapped when she was 14-years-old. She was held captive for nine months by Brian David Mitchell, a man who believed 1) that he was a true prophet of God, and 2) that Elizabeth was to become his (plural) wife. In March of 2003 the police rescued Elizabeth in Sandy, Utah. 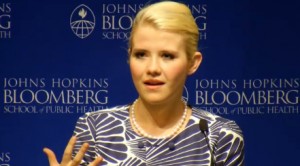 On May 1, 2013 Elizabeth Smart addressed a human trafficking forum at Johns Hopkins University. She spoke of the sexual abuse she endured during her captivity and how it made her feel. Elizabeth addressed something she has been asked repeatedly during the ten years since her rescue: “Why didn’t you run away? Why didn’t you yell? Why didn’t you scream?” Her answer was two-fold.

First Elizabeth spoke of fear stemming from threats made against her life and against the safety of her family. So in an effort to protect her family and herself, she said, “I always did what my captors told me to do.”

Then Elizabeth explained that what kept her from running or screaming “goes even beyond fear.” Though she wanted to be rescued and reunited with her family, as a young Mormon girl she believed that the sexual abuse she had suffered had made her “worthless.”

During her address, Elizabeth spoke of her upbringing in “a very religious household” in which she was taught that sex was to be reserved for marriage. She had every intention of maintaining her chastity until her wedding day, but Brian David Mitchell took that away from her. After the first rape, she explained, “I felt crushed. Who could want me now? I felt so dirty and so filthy.” She felt “devalued” and reluctant to try to reenter her old life. “Can you imagine turning around and going back into society where you are no longer of value, where you are no longer as good as everyone else?” she asked her audience.

Elizabeth related a lesson on abstinence that she had been taught as a girl. In this lesson the teacher likened a young woman to a piece of gum; after sex outside of marriage it was as if the gum had been chewed; and after being chewed and passed around, the gum (i.e., the young woman) became worthless. This lesson stuck with Elizabeth, and after being raped by Mitchell, she questioned if it would even be worth being rescued since she was now a chewed-up piece of gum worthy only of being thrown away. So Elizabeth did not run or scream for help.

Because of Elizabeth Smart’s courageous remarks earlier this month, Mormon women are talking about this and sharing their own experiences. While Elizabeth said her chewing-gum lesson was taught in school, other Mormon women describe lessons they have been taught in LDS meetings where similar analogies were presented including mashed Twinkies, half-eaten candy bars and man-handled roses. A woman named Cindy wrote,

“I remember my beehive teacher bringing in a beautiful red jello in a clear crystal bowl–and then dumping the contents of a vacuum cleaner bag on it. It was awful–such a visual contrast. But even then I knew that there was something wrong with the analogy–and later I realized that her analogy made no provision for repentance.”

Indeed. Elizabeth Smart, a victim of her captor, did not need to repent of engaging in pre-marital sex with Brian David Mitchell. But setting that aside, she still didn’t know that her life could be redeemed. Where would she get the idea that her situation was so hopeless?

Elizabeth was reared in a time when the official teachings of the Mormon Church were more tempered than in earlier years. But those who raised her, and those who taught her, learned their lessons in a harsher environment. Just 6 years before Elizabeth was born, an article appeared in the Ensign magazine as a First Presidency Message. It said in part,

“You will recall Alma’s teaching his son Corianton that unchastity is the most serious offense there is in the sight of God, save murder or denying the Holy Ghost… Some years ago the First Presidency said to the youth of the Church that a person would be better dead clean than alive unclean… I remember how my father impressed the seriousness of unchastity upon my mind. He and I were standing in the railroad station at Rexburg, Idaho, in the early morning of 12 November 1920… ‘remember this, my son: we would rather come to this station and take your body off the train in a casket than to have you come home unclean, having lost your virtue.’ …President Clark, in a conference address in October 1938, said: … ‘Please believe me when I say that chastity is worth more than life itself. This is the doctrine my parents taught me; it is truth. Better die chaste than live unchaste. The salvation of your very souls is concerned in this.’” (Marion G. Romney, “We Believe in Being Chaste,” Ensign, September 1981).

Consider some of the other statements made by Mormon Prophets and Apostles that have helped form today’s Mormon culture in Utah:

“Also far-reaching is the effect of loss of chastity. Once given or taken or stolen it can never be regained. Even in a forced contact such as rape or incest, the injured one is greatly outraged. If she has not cooperated and contributed to the foul deed, she is of course in a more favorable position. There is no condemnation where there is no voluntary participation. It is better to die in defending one’s virtue than to live having lost it without a struggle” (Spencer W. Kimball, The Miracle of Forgiveness, 196).

“Loss of virtue is too great a price to pay even for the preservation of one’s life — better dead clean, than alive unclean. Many is the faithful the Latter-day Saint parent who has sent a son or a daughter on a mission or otherwise out into the world with the direction: ‘I would rather have you come back in a pine box with your virtue than return alive without it.'” (Bruce R. McConkie, Mormon Doctrine, 124.)

“…There is no true Latter-day Saint who would not rather bury a son or daughter than to have him or her lose his or her chastity — realizing that chastity is of more value than anything else in all the world.” (Heber J. Grant, Gospel Standards, 55) 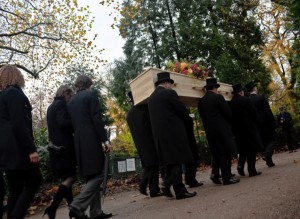 No wonder Elizabeth Smart believed there was no hope for her, no reason to be rescued and released from the horrible captivity and abuse she suffered. If she understood that she was better off dead than sexually impure, that her parents would rather bury her than have her back in her unclean state (as she saw herself), there was no reason for her to think she could ever find peace or forgiveness in this life.

The Mormon Church does teach that one can repent from sexual sin, and that those who are forced into sexual relations are not guilty of sexual sin, but Elizabeth Smart didn’t get that message. Instead, she got the harsh and graceless message that one’s worthiness and eternal hope is anchored in one’s ability to perfectly obey the rules as set forth by the Mormon Church.

This is one of the tragedies of Mormonism: False prophets teaching harmfully false ideas under the guise of speaking for God. Elizabeth Smart was a victim of more than just the abuses of Brian David Mitchell.

My friends, there is no circumstance in which a person’s sin or life situation is beyond the reach and redemption of Jesus. “For while we were still weak, at the right time Christ died for the ungodly. For one will scarcely die for a righteous person—though perhaps for a good person one would dare even to die— 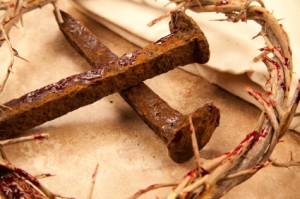 but God shows his love for us in that while we were still sinners, Christ died for us. Since, therefore, we have now been justified by his blood, much more shall we be saved by him from the wrath of God. For if while we were enemies we were reconciled to God by the death of his Son, much more, now that we are reconciled, shall we be saved by his life. More than that, we also rejoice in God through our Lord Jesus Christ, through whom we have now received reconciliation.” (Romans 5:6-11)