The Mormon Church recently released an updated edition of its scriptures. One of the resources that underwent some change is the Bible Dictionary, found in the back of the LDS edition of the KJV Bible (print editions). In reviewing some of the changes made to the new digital edition I found one of particular interest in the entry titled “Fall of Adam and Eve.”

The entry previous to the new changes said (in part),

“Before the fall, Adam and Eve had physical bodies but no blood. There was no sin, no death, and no children among any of the earthly creations. With the eating of the ‘forbidden fruit,’ Adam and Eve became mortal, sin entered, blood formed in their bodies, and death became a part of life. Adam became the ‘first flesh’ upon the earth (Moses 3: 7), meaning that he and Eve were the first to become mortal. After Adam fell, the whole creation fell and became mortal.” (Bible Dictionary, “Fall of Adam,” 670)

This doctrine, blood forming as a direct result of the Fall, is consistent with the teachings of other Mormon authorities. Joseph Fielding Smith, who became the tenth President of the Mormon Church, was firmly convicted of this doctrine. He wrote,

“We are also taught that, not being subject to death, Adam had no blood in his veins before the fall. Blood is the life of the mortal body…There is no blood in an immortal body, and when Adam transgressed the law and ate the fruit that had been forbidden there came a drastic change in his body and it was transformed from the condition where there was no death to a condition where it became subject to death, or mortality, and from that time forth blood was the life-giving fluid.” (Man, His Origin and Destiny, 362-364)

“We know that when Adam was placed on the earth it was pronounced ‘good,’ and he, as well as the earth, was not subject to death. There was no ‘curse’ on the earth. There was no blood in his body, but he had a spiritual body until it was changed by the fall. A spiritual body is one which is not quickened by blood, but by spirit. Before the fall Adam had a physical, tangible body of flesh and bones, but it was not quickened by blood. The partaking of the forbidden fruit caused blood to exist in his body and thus the seeds of mortality were sown and his body then became temporal, or mortal, subject to the vicissitudes of mortal change. The Lord created all things upon this earth physically and immortal, or free from the seeds of death. The fall of Adam brought the change upon the earth and all things upon its face partook of the conditions imposed upon Adam in the fall.” (Church History and Modern Revelation, 2:5-6)

“Now when Adam was in the Garden of Eden, he was not subject to death. There was no blood in his body and he could have remained there forever. This is true of all the other creations… After the fall, which came by a transgression of the law under which Adam was living, the forbidden fruit had the power to create blood and change his nature and mortality took the place of immortality, and all things, partaking of the change, became mortal.” (Doctrines of Salvation, 1:77)

“Since it was by the creation of blood that mortality came, it is by the sacrifice of blood that the redemption from death was accomplished, and all creatures freed from Satan’s grasp. In no other way could the sacrifice for redemption of the world from death be accomplished. Blood being the agent of mortality, it had to be returned to Satan and to death, whence it came… Jesus obtained his blood from his mother Mary; he obtained his power over death from his Father. Therefore he could and did voluntarily surrender himself to his enemies who crucified him by the shedding of his blood. When he arose from the tomb, he was free from blood, and his body had become subject to eternal law henceforth and forever.” (Answers to Gospel Questions, 3:109) 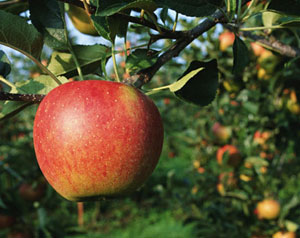 Mormon Apostle Bruce R. McConkie supported Joseph Fielding Smith in this doctrine, as he included the teaching in several of his own books. For example, in Mormon Doctrine, he wrote,

“Adam, our first parent (1 Ne. 5:11), a ‘son of God’ (Moses 6:22), was first placed on earth as an immortal being. His coming was the crowning event of the creation; and as with him, so with every department of creation — immortality reigned supreme. (2 Ne. 2:22.) There was no death, no mortality, no corruption, no procreation. Blood did not flow in Adam’s veins, for he was not yet mortal, and blood is an element that pertains exclusively to mortality…

“In conformity with the will of the Lord, Adam fell both spiritually and temporally. Spiritual death entered the world,… Temporal death also entered the world, meaning that man and all created things became mortal, and blood became the life preserving element in the natural body.” (“Fall of Adam,” 268-269)

Mormon Apostle Alvin R. Dyer also jumped on this doctrinal bandwagon. In his book, Who Am I?, he wrote,

“By their own act of transgression, Adam and Eve brought mortality upon themselves. This imposed conditions causing blood to flow in their natural bodies. But it also rendered them capable to fulfill the greater commandment they had received from God to ‘multiply and replenish the earth.’” (247-248)

That blood formed in the bodies of Adam and Eve at the time that they became mortal seems like a pretty solid doctrine in Mormonism. Perhaps it remains so, but the new edition of the Bible Dictionary contains no reference to it. The new entry states (in part),

“Before the Fall, there were no sin, no death, and no children. With the eating of the ‘forbidden fruit,’ Adam and Eve became mortal, sin entered, and death became a part of life. Adam became the ‘first flesh’ upon the earth (Moses 3:7), meaning that he and Eve were the first to become mortal.” (Bible Dictionary, “Fall of Adam and Eve,” new online edition)

Interestingly, a similar change was made in the Bible Dictionary entry titled “Resurrection.” Compare the previous edition and the new edition:

“Others had been brought back from death but were restored to mortality (Mark 5:22–43; Luke 7:11–17; John 11:1–45), whereas a resurrection means to become immortal, with a body of flesh and bone.” (Bible Dictionary, “Resurrection,” new online edition)